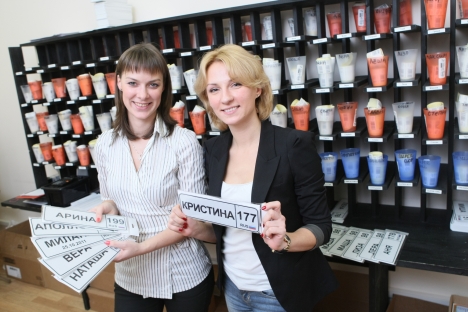 Young mother Maria Novoselok looked at websites selling products for children and realized this was a niche that no one in Russia was filling. All she found was mothers in a few discussion forums talking enthusiastically about the license plates they had been sent from Estonia or Lithuania.

Adults register their cars and receive license plates, so why shouldn’t children? This is what Maria Novoselok from St. Petersburg thought, so she launched baby-nomer.ru. Now, she and her business partner, Alexandra Panyshina, receive orders for diplomatic-, military-, country-, and nickname-themed tags for kids and their vehicles — everything from strollers to sleds.

“My daughter was born in 2009, and my mom, who lives in Sweden, gave me a license plate for a stroller with her name and date of birth on it,” says Maria Novoselok. “And, every time I went out, people would ask me: ‘Where can I get one of those?”

Maria looked at websites selling products for children and realized this was a niche that no one in Russia was filling. All she found was mothers in a few discussion forums talking enthusiastically about the license plates they had been sent from Estonia or Lithuania.

Maria began talking to her friends about the idea and received a lot of skeptical responses. Then, one day, her friend Alexandra Panyshina, who was also a young mother, came to see her.

“She was genuinely surprised that I hadn’t started a business yet,” says Maria. “I realized what I needed was someone who thought the same way as me.”

So, the two women decided to go into partnership. On June 1, 2011, they launched a website where people could place an order for a license plate to be made. They announced their “first summer” promotion: customers could get a license plate for 350 rubles ($11.60), including delivery. They also made a lot of plates for friends, free of charge, to spread the idea.

The initial investment in the project was about 1.5 million rubles ($49,700). The money went into producing the first batch of plates, which contained some for the O’Key supermarket chain.

The two mothers put everything they had into it, including the money in their bank accounts and personal loans secured against two cars; they also borrowed part of the money from friends and parents. Six months later, the startup was offered a loan from a major commercial bank. Loans now make up the majority of their working capital, says Maria.

They decided to manufacture the plates from plastic and apply a reflective film. “This means the stroller shows up better in vehicles’ headlights,” Maria says. “People order all sorts of plates — red diplomatic ones, blue ones like the police use, black military ones and even some based on plates used in other countries, like Israel, Ukraine and Georgia.”

The most difficult thing in this business, she says, is to control the range available in shops: if the range is not complete, there is an immediate drop in sales.

“We offer a choice of 93 names for more than 40 regions, and we supply the plates with the right vehicle code for the relevant region,” says Maria. It has also been tricky to create the range of names. At the beginning, the two entrepreneurs armed themselves with the 40 most popular names, plus the regional codes; but even so, in Kazan, for example, the product did not sell well. They had to add some more names to the list before sales picked up.

Not just for kids

Maria and Alexandra had intended to operate as individual entrepreneurs, but they discovered that, to work with major chains, the contractor had to be in the general taxation system and registered for VAT.

“We were ready to start working with the Deti chain of baby shops when we found out about this,” says Maria. “We had to get registered quickly as a limited company.”

The two women registered the Baby Plus company on July 18, 2012, after which it was easier for them to negotiate with the directors of the ZdorovyMalysh, DochiSinochki and O’Key chains. The latter even agreed to work with the company on deferred payment terms. The DochiSinochki chain notes that the company’s sales figures are high, and there is equal demand for plates with names and plates with nicknames.

“Our products are well known now, and easy to find on the Internet,” says the businesswoman. “Apart from the chains, we’re working with some small shops that sell children’s products in various cities. Last year, our company’s average turnover was 1 million rubles [around $33,200] per month.”

The entrepreneurs see the license plates more as merchandise products: people often buy them as a gift and hang them not just on strollers but also on children’s cars, bikes and sleds.

It is pure merchandise, agrees Tula businessman Igor Zolotov, owner of the Sharcompany that manufactures educational toys for children.

“And the fun of it is not so much for the children as for the adults. The baby doesn’t care what their parents stick on their stroller, but it’s a laugh for the parents.” He believes the product fits in with fashion trends: when you cannot think of what to give as a present to people who have everything, a fun license plate can be a bit of a lifesaver.