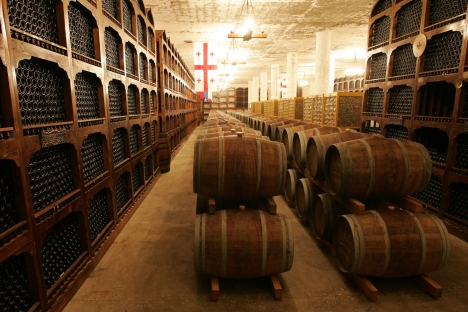 The Georgian delegation estimated that Russians might see such famous Georgian wines as Kindzmarauli and Khvanchkara in the shops again by late spring. Source: PhotoXPress

After a six-year embargo, Georgian winemakers expect their wares to be back on Russian shelves by this spring. Georgia is confident that its wines will enjoy its same pre-embargo popularity. Experts, however, believe Georgia will have to fight for even one percent of the market, which is now dominated by South American and European wines.

On Feb. 4 in Moscow, the head of Rospotrebnadzor, Gennady Onishchenko, met with a delegation from Georgia to discuss the possible return of Georgian wines and mineral water to the Russian market. At the end of their talks, Georgia announced that deliveries could resume as early as this spring.

In mid-February, three groups of specialists from Rospotrebnadzor — the Russian consumer watchdog — will pay a return visit to Georgia and inspect those Georgian enterprises that have already submitted documents to export wine to Russia. They will also decide the question of who will control the quality of these wines.

Head of the Georgian National Wine Agency, Levan Davitashvili, said that Russia could participate in the monitoring process but, as before, Georgia would control the entire system for producing these wines.

Georgia hopes for restoration of trade with Russia

Russia placed an embargo on imports of Georgian wines and mineral water in 2006. The official reason given for this was the low quality of Georgian products. Now, assuming that Georgia’s quality-control structures are deemed competent, all of the controlling will be done on Georgian territory.

After these procedures have been completed, the matter of registering these goods in Russia will be decided. All of these procedures could take between six and eight weeks. The Georgian delegation estimated that Russians might see such famous Georgian wines as Kindzmarauli and Khvanchkara in the shops again by late spring.

Meanwhile, Rospotrebnadzor’s Onishchenko said that the Russian embargo on imports of Georgian wine ingredients would remain in place. Specialists agreed that this would place Georgia at a disadvantage with Western Europe and Latin America, which supply wine ingredients to Russia and thus significantly lower the cost of their products.

Before the embargo, Georgian wines accounted for 10 percent of the Russian market. In the last six years their niche has been taken over, in part, by wines from Latin America. Consequently, Georgian wines will have a hard time regaining their old foothold.

Georgian winemakers have already projected that they could supply the Russian market with some 10 million bottles of wine per year.

This wine will not be cheap, however. It will cost 300 rubles ($10) a bottle and up, says Davitashvili. Still, he is sure that these wines will not be a hard sell in Russia, assuming that Russians have not forgotten the taste of the best Georgian wines.

Experts, on the other hand, anticipate that Georgian producers will not have an easy time of it; they will have to make great efforts in order to regain even 1 percent of the Russian market.

“The situation on the Russian market since the departure of Georgian wines has changed dramatically. Even before the embargo, some Georgian wines were selling for 300 rubles; but back then that price category was wide open," he said. "Today there isn’t a free place on the shelves for wines at that price."

"Here you find many good Russian-produced wines and wines from almost all winemaking countries," he added. "If six years ago the French tried to sell their wines for 600-700 rubles [around $20] and up, then today you can find French, and Spanish, and Italian, and Chilean wines for 300 rubles.  Most Russians buy wines costing from 150 to 300 rubles.”

Tatiana Sharapova, chairperson of the Russian guild of sommeliers, is of the same opinion. During their years of absence from Russia, Georgian wines have changed their style. Of the Georgian wines to which Russians were accustomed, few remain; their nurseries were not preserved because there were no means to do so.

Then again, California winemakers helped Georgian winemakers, free of charge, as part of U.S.-Georgian cooperation. As a result, Georgia now produces many wines from European kinds of grapes adapted to California.

Georgia is now a successful producer, for example, of Chardonnays and Cabernets, which sell in Europe and the United States. Many Georgian wines are now kept in new oak barrels, as well.

Georgian winemakers today are not offering what Russians think of as their traditional wines. They are offering wine that is like Chilean wine or Argentinean wine — except it costs more.

On average, they consume seven liters a year of fruit and grape wines and less than two liters of sparkling wines and champagne; that is 3.5 to 5 times less than consumption levels typical in European countries.

At the same time, the greatest demand is for imported wines — mainly from France, Spain, Portugal, Italy, Germany, Chili, Argentina and Moldova.