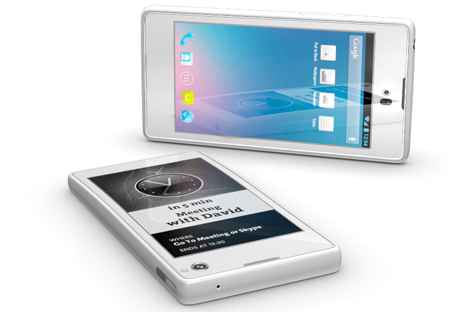 A phone from an unknown Russian company has won a Best of Consumer Electronics Show award from CNET.com. The device is not available for sale yet, but already stands out amongst competitors because of its two screens. In bestowing the award, CNET.com commented that the two displays give the user “the best of both worlds.”

The YotaPhone is based on the novel and somewhat quirky idea of putting two displays on one device: a battery-conserving e-ink display for reading books or long articles, and a full-color LCD for viewing TV shows or flipping through photo galleries.

If all smartphones are more or less equal when it comes to ease of reading, then everything depends on the size and quality of the screen. Here the YotaPhone has a distinct advantage. The user can use the special e-ink display to read on this phone; the eyes may get tired of looking at it, but the text itself is just as clear as if it was printed on paper.

The e-ink display on the YotaPhone can also be used for other tasks — reading text messages, reading news feeds on Facebook, reading maps, browsing news sites. There are tons of apps that would be well-suited for an e-ink screen. In addition, if the color display of the YotaPhone has a low battery after 24-36 hours of being used actively (just like any other modern smartphone), then the e-ink screen can be used instead of the main screen.

A fully charged YotaPhone could hold its battery power for days on end.

The main color display is 4.3 inches, with a resolution of 1280 x 720 pixels; the second e-ink display is also 4.3 inches. As well as the two screens, the YotaPhone also has a unique gesture navigation control concept.

The YotaPhone is produced by the privately-funded Moscow- and St. Petersburg-based Yota Devices. The smartphone spent two years in development with a team of 50 people, including former Nokia and RIM (maker of the Blackberry) engineers and home-grown Russian talent.

At the Consumer Electronics Show (CES) in January 2013, CNET presented the YotaPhone with a Best of Consumer Technology award in the mobile phones category. The CES, which takes place annually in Las Vegas, is the world’s main forum for unveiling new and exciting developments in consumer tech.

The exhibition draws some 150,000 visitors to its 3,000 or so vendors, covering fields as diverse as television, home-cinema and audio equipment, cameras, automotive electronics, home automation, mobile phones and Internet tablets.

“This show in Vegas is the first time we broadly tried to validate our idea,” says Yota Devices CEO and founder, Vladislav Martynov. “And I’m really excited that it really does seem to resonate well with people.”

You could say that the company had a bit of luck at the CES show: more and more often, big companies choose not to show their best products at exhibitions, preferring to wait to present their products independently as the peak buying season draws near. This meant that the YotaPhone had virtually no competitors at this year’s CES.

The only other interesting stand was Sony’s; but this showcased classic smartphones, while the YotaPhone presented a format that was completely new and experimental.

“There is not really that much innovation in smartphones in recent years,” says Martynov. “But we see a lot of scope for improvement in these devices. For us it’s about the user experience, and we are focusing on how to improve the user experience to make it much better.”

Commenting on the fact that his product won the prize without even being exhibited at the show, Martynov said that the company had arranged a number of press interviews on the first day and, by the second day, the word had spread like wildfire.

Yota is looking for international distribution and is already working on a second generation follow-up product with what Martynov describes as “quite interesting new technologies.” The company has not ruled out white-labeling (selling under a reseller’s brand) the phone abroad, but it is proceeding with the YotaPhone brand in Russia.

{***Can the first Russian smartphone attract Russian and foreign consumers? ***}

Can the first Russian smartphone attract Russian and foreign consumers?

The real question is whether the first Russian smartphone can manage to win the hearts of Russian and foreign consumers.

“It seems great. I’ll definitely have a look”;

These are the kinds of comments the YotaPhone receives on the biggest English-language websites for IT and gadget fans. And here is what Russian consumers have to say about the Russian smartphone:

“Why don’t you put a pencil sharpener on it as well, then it will be really nifty”;

“The design is ridiculous, and so is the price”;

“I personally don’t get what’s supposed to be Russian about it.”

Of course, English-speaking tech consumers are not united in the opinion that the YotaPhone is the ultimate in smartphones, nor do Russian techies have exclusively bad things to say. However, these comments seem to illustrate the general mood. And it must be noted that, in Russia, people are definitely not prejudiced against the YotaPhone just because it is a Russian product.

Two years ago, Sergei Chemezov, head of state-owned corporation Rostekhnologii, unveiled the model of yet another “iPhone killer” to then President Dmitry Medvedev. A short video of this meeting immediately went viral: people laughed and discussed the latest Russian gimmick, an embarrassing anti-climax that turned to dust in front of the president and the whole country.

Seemingly, this was proof of the hopelessness of Russian industries, unable to create anything independently and capable only of buying readymade goods in China or Taiwan.

This early unveiling of a defunct prototype is what gave rise to the wave of criticism against the YotaPhone in Russia — and the initial skepticism was not unfounded. Two years ago, the president was shown a piece of plastic with a strange, rudimentary design and told that “this will also have two screens.”

This tainted people’s faith in the project, and the company Skartel (the Yota brand) could not hope to attract serious investment from within Russia. The company’s only hope was to get help from the state.

At the same time, Skartel (the developers have since separated themselves from the corporation and go under the name of Yota Devices) began trying to get their project to the working-model stage, to prove they were more than just a laughing stock. To the surprise of many, the company has managed to do this.

Of course the YotaPhone is a niche solution: not every consumer needs a smartphone with two screens. Still, the product has huge potential, and it could pioneer a new category of smartphone and a new form factor in portable devices, just as sensory phones, QWERTY smartphones and many other products once did.

The YotaPhone is interesting and unusual, and the company does not need to think out scenarios where this phone would come in handy: they are all plain to see and the demand is clear. People will always want to read books and news sites and surf the web. Now, all this can be done on a screen that is specially designed to make reading easy and comfortable for the eyes, on a device that has lasting battery power.

In Russia, Yota Devices plans to start selling its devices in the third quarter of 2013, around September. The preliminary price is set at $660. People in the company emphasize that their aim is not to produce and sell as many devices as possible to make a fast buck. The main task is to develop the product to its maximum potential.

The company wants to begin selling the product and monitoring the response of real consumers, in order to make further improvements. First and foremost, Yota Devices wants to show that the new concept has legs, and, for this to happen, they need to release a product that is fully finished and flawless.