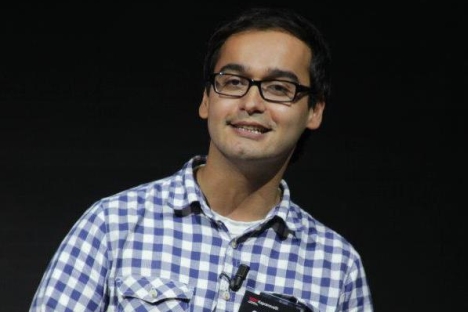 Bairam Annakov, CEO of InFlow: "Logging your mood should be simple, quick and easy. No diaries or pens, and no procrastination." Source: InFlow

The InFlow app analyzes users’ locations, environments, activities and feelings to come up with advice on how to make the most of their day. The startup’s CEO, Bayram Annakov, began logging his moods years ago. When he discovered that the practice made him happier, he had an idea of sharing his secret with others.

Logging your mood, location or the people you are with several times a day might seem like a ridiculous idea at first. But Bayram Annakov, CEO of InFlow, maintains that he has learned a lot of interesting things about himself since he started doing it.

“Several years ago, I read Mihaly Csikszentmihalyi’s‘Finding Flow: The Psychology of Engagement with Everyday Life.’ It discusses a methodology of self-awareness through regular logging of one’s state of mind and location. I wasn’t sure I would be able to do this on a regular basis, so I asked my friend to take part in an experiment with me. We would text each other the words ‘piu-piu’ several times a day to signal the need for logging our mood,” says Bayram.

Bayram’s advice to investors: Keep control and freedom of action in balance

The results were impressive. Bayram quit his job as a lecturer at Moscow State University once he realized that he only liked teaching the students that were genuinely interested. In the crisis year of 2008, he left a company he was working for and started his own business. The changes he had made to his life as a result of this practice of self-observation were making him happier, and he soon wanted to share his discovery with others.

“Logging your mood should be simple, quick and easy. No diaries or pens, and no procrastination. That’s how we came up with the InFlow app for the iPhone, which soon rose to second place in the Lifestyle category of the Russian AppStore,” Bayram says.

“As a rule, we are the least aware of our own emotions,” says Denis, a psychologist and a developer for the app. “Of course, emotions often take over from rational thinking and determine a lot. But once we become aware of them, we can be in control of ourselves. InFlow helps people log emotions and view their mood statistics. InFlow won’t serve as a life coach, of course, but it will give you a reason to think about the interconnection between your daily routine and your mood.”

The app’s home screen is divided into two parts. The user’s avatar, with an indicator of the latest logged mood, sits in the upper-left corner. On the right side, there is a chart tracking mood and energy, each on a scale from 3 to -3.

Bayram explains: “The mood chart shows the five most recent check-ins. We added it a couple of months ago, as a test to see if there would be demand for this service and what the response would be. Many users are now asking to view the mood chart for a longer period of time.”

Below are four blocks labeled “Friends,” “My Predictions,” “Get a Tip,” and “Best & Worst.”

“Friends” is a timeline showing friends’ moods, with the possibility of viewing a list of actual and potential friends. “Best & Worst” shows ratings of friends, places and activities. “Get a Tip” shows nearby places users can visit to improve their mood. “My Predictions” is the most controversial function: it is supposed to generate mood projections based on check-in statistics.

“The idea is very simple. As you use the app, you answer questions about where you would rather be and who you would rather be with; this is your personal opinion. This section will contain stats and comparisons of what you’re thinking about and how you’re feeling based on your check-ins. This provides an insight into thought and reality,” says Bayram.

The team’s priority task now is to implement registration via email. Many users do not wish to register via their Facebook accounts, and some do not have a Facebook account at all.

“We are losing users because of the rigid link to Facebook. Only 22 percent of our users have friends who use the app and share their mood statuses with friends and family, while most prefer to use InFlow only for themselves. So we are implementing a registration system and will soon start adding more detailed statistics, as well as weekly and monthly user and friends’ mood reports, highlighting the brightest moments,” Bayram says.

“An app like this has the potential to become extremely interesting. It just needs a more sophisticated system for displaying a person’s mood, as well as more detailed mood charts that can go back a month, for example. Personally, I was excited about the app when the developer first told me about it. After using it for a couple of days, I lost interest, because I didn’t see any practical value for myself. The idea is nice, but it should be implemented properly,” said Antonina, a psychologist and a user.

The startup is planning to make money from additional services, such as detailed statistics and mood-lifting gifts for friends. Another possibility involves b2b research of employees’ moods.