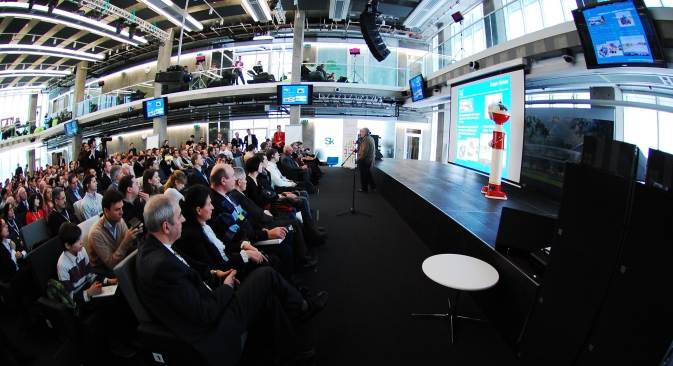 With new conference, the Skolkovo Foundation offers support for development of both experimental prototypes in robotics as well as robots to perform everyday tasks.

Last weekend, more than 500 people packed the first two floors of the Hypercube, the main building at the Skolkovo Innovation Center, which was refitted to look more like a laboratory from a science fiction film than an office building.

The occasion was the Skolkovo Robotics International Conference, organized by the Skolkovo Foundation with support from the Russian Ministry of Communications and Mass Media. The purpose of the conference was to support research and development efforts in the field of personal and service robotics.

Interest in robotics is currently experiencing a revival in Russia. During the Soviet era, many schoolchildren dreamed of becoming cosmonauts and were avid readers of sci-fi books, but the changes brought about by the introduction of a market economy after 1991 made successful entrepreneurs the new role models.

Today, however, kids dream of founding hi-tech startups. Meanwhile, cheaper components have opened up huge prospects in the areas of artificial intelligence and mechanics. The combination has fueled interest in robotics.

Several of the experts that spoke at the Skolkovo Robotics Conference – including Dmitry Grishin, chairman of the board of the Mail.ru Group, and Russian Venture Company CEO Igor Agamirzyan – pointed out that fundamental changes are taking place right now and humankind is at the threshold of the greatest revolution in robotics.

“A team of four or five engineers can be engaged in robotics projects now. This would have been impossible had there not been a boom of smartphones and other electronics,” Grishin said.

Examples of new products were presented on the second floor of the ultra-modern concrete-and-steel building. Exhibits manufactured by forum participants included devices made from “whatever people could get their hands on”– such as a netbook and other common electronic gadgets.

Most robots on display were intended to perform everyday tasks. For example, there was a robot that could engage in a simple automated conversation with the audience and post those dialogues on Twitter. There was also a robot capable of testing the condition of pipelines, which could also be used at hazardous sites such as nuclear power plants.

Visitors to the exhibition could also observe a mini-helicopter being developed jointly with the Ministry of Emergency Situations that can run a complete diagnostic of a house or a demolished building in a disaster area. Some of the inventions were being created exclusively for the military and, hence, were off-limits to observation by the public.

The conference was attended by prominent international experts as well as research and scientific teams. Lectures were given by Steven Dubowsky, director of the MIT Field and Space Robotics Laboratory and Yiannis Demiris, head of the Bioinspired Assistive Robots and Teams Laboratory at Imperial College London

Developments in the field of robotics is getting additional support from the Skolkovo Foundation. Foundation President Viktor Vekselberg announced at the beginning of the conference the creation of an annual Skolkovo Robotics Challenge contest, which will fund the production of experimental prototypes – normally the most expensive business process of tech startups.

“We would like you to have the opportunity to implement working models,” Vekselberg told the audience.