Sochi 2014: The most affordable Winter Games in history 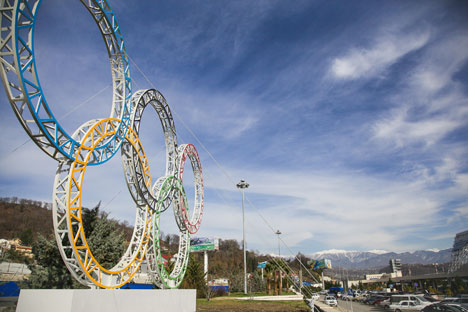 The organizers of the 2014 Winter Games in Sochi expect to sell 70 percent of the tickets to the Russian public and the remaining 30 percent to foreigners.

Tickets for the 2014 Sochi Olympic Games went on sale in early February. They are available online at www.tickets.sochi2014.com or from the Olympic Committee of any participating country. The organizers expect to sell 70 percent of the tickets to the Russian public and the remaining 30 percent to foreigners.

The trip to Sochi will be cheaper than London, but more expensive than Vancouver. In the British capital, ticket prices reached nearly 100,000 rubles ($3,325). However, the London Olympics were not only in the summer, but they were also the most expensive ever in the history of the Games.

In Vancouver, the maximum ticket price did not exceed 33,000 rubles ($1,100). However, Russia's Organizing Committee hopes that the Olympics will turn out to be relatively inexpensive, according to its president, Dmitry Chernyshenko.

"We want as many of our fans as possible to come to Sochi to support the team, which is why 42 percent of the tickets will be less than 3,000 rubles. We really are offering some of the most affordable tickets in the history of the Winter Games," said Chernyshenko.

The flip side is that the tickets are essentially non-refundable — simply handing them over will not be enough to get your money back. Refunds are available only in the event of the ticket owner's death, cancellation of the event, or if the owner is refused a “fan's passport” (a special document issued to gain entrance to the Olympic site).

The first tickets will only be available online. A short while later, they will go on sale at official ticket outlets, a list of which is published on the Sochi Olympics website. Only Visa cards are accepted. Incidentally, this is the only method of payment directly accepted at the Olympics.

The Russian organizers of the Games have tried to learn lessons from London, where most of the tickets were sold over the Internet. People applied for tickets online and entered their card details. Tickets were then allocated randomly to a lucky few. However, a scandal quickly broke out when it became known that many Visa cardholders could not receive their tickets because their cards were going to expire in less than four months.

British newspaper The Daily Mail estimates that about 10 million people were affected. The proposed solution was to fill out a form at the bank Lloyds TSB and pay for the ticket by card or cash. The ticketing system had to be hastily revised.

One of the organizers' main concerns is ticket scalping. For that reason, the organizers have introduced a document called a “fan's passport.” It will be issued to anyone who purchases at least one ticket. To obtain the passport, an application must be submitted on the Organizing Committee’s website. The application will be checked by the police, who reserve the right to refuse issuance. In case of refusal, the money for the ticket will be refunded.

The passport must be shown by all spectators at the entrance to Olympic venues; without it, entry is forbidden. True, it is not yet clear what the procedure is for a person wishing to buy a ticket for someone else as a present. That person would have to register and apply for a passport, but then questions would arise as to why the ticket and passport were in someone else's name.

Scalpers have also been hit by a special law introduced on Jan. 15. It stipulates fines for violations of the ticketing rules. This means that the practice of buying a souvenir for 10,000 rubles ($330) that also allows admission to the Games will be prohibited.

The article is based on materials from Kommersant-Dengi magazine.