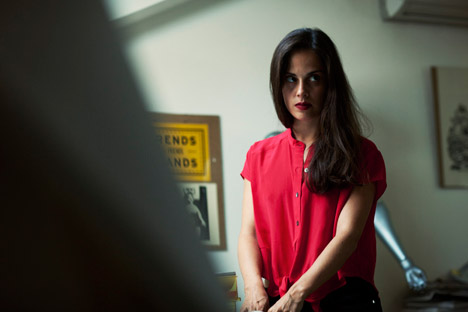 Three years ago, Anastasia Sartan worked in New York as a waitress. Now she is the owner of online store TrendsBrands.ru. Source: Kommersant

Having banked on inexpensive fashion brands, the online store TrendsBrands.ru is now one of the fastest growing startups in Russia. Experts, however, believe that the company will have its work cut out for itself in the future, as it tries to cater to the fashion moods of its capricious, hipster client base.

TrendsBrands.ru owner Anastasia Sartan was counting on her diamond ring. "If after a few months I was unable to pay my staff, I would not have thought twice about selling it," she says. But the ring survived: in the first year of operation in 2011, the store managed to attract investments worth $1 million from the Russian funds Ru-Net and Kite Ventures.

TrendsBrands.ru recently closed a second round of investments and now has another partner in Ventech (a French fund known for investing in Russian online startups at early stages). Besides TrendsBrands.ru, Ventech’s portfolio includes the online booking service Otkogo and Pixonic, which creates games for social networks.

Three years ago, Anastasia Sartan worked in New York as a waitress. In her spare time, she put her creative skills to use by assisting designers she knew with their clothes, helping foreign buyers to select merchandise.

On returning to Moscow, she decided to sell such clothes to Russian hipsters, taking with her 20 dresses for friends who, by that time, had set up a showroom at Kurskaya. The goods sold out quickly, and Anastasia brought more. That year, the partners opened two more showrooms in St. Petersburg and Kiev, plus two websites.

When Sartan fell out with her friends, however, she decided to go solo. Her legacy from the previous business was a few tables, several laptops, and $10,000, which she used to start TrendsBrands.ru. Anastasia quickly realized that it made little sense trying to go head-to-head with the likes of D&G and Prada on such a budget.

Instead, she decided to put together a range of inexpensive and lesser-known brands, taking great pains to select the most fashionable items — she wanted to sell clients fashion trends, instead of brands and labels.

In addition, Sartan made the decision to update her collection more than twice a year, as is traditional; she added something new each month. The businesswoman still believes that this is her main competitive advantage. Perhaps that is why the store's website is a kind of haven for hipsters, with its range of sneakers, sweaters, platform shoes, shirts, and skinny jeans — stylish and very modern.

Anastasia sometimes hears surprised exclamations from her fellow citizens: "Clothes on the Internet? You can't try them on!" Nevertheless, it seems most online retailers that have been on the market for a decade or more consider clothing to be the most promising sector on the Russian Internet.

"The prospects for selling clothes online are just about the best there are," says marketing director of Yutinet.ru, Maria Savina. "The margin is very good, and it's very difficult to compare prices. The chances of people making 'emotional' purchases are very high."

Clothes by a free spirit, tied to history

The owner of online store Sotmarket, Vsevolod Strakh, completely agrees: "The margin really can hit 300 percent. In comparison, the margin in the electronics segment is a tearful 6.8 percent. True, goods are often returned in the clothing retail sector — maybe about 50 percent — but, with such high margins, clothing stores can afford it."

Items are returned for a simple reason: buyers try on dozens of articles, with the intention of selecting just two or three. They will, for example, order 10, try them on, and then send eight back through the mail.

Although TrendsBrands.ru managed to get funding in its first year of operation, Sartan and other players are sure that online retail will be able to pay its own way in future. Last year’s net profit for
Internet giant ASOS came to £30 million ($46.9 million).

TrendsBrands.ru considers ASOS to be a potential competitor, considering its long-standing intention of entering the Russian market. Sartan hopes to see revenue of $60-80 million by 2015. At present, experts estimate that TrendsBrands.ru could be worth $4-6 million.

Winning over the hipster crowd

The company closed its second round of investments in early February 2013. As a result, France's Ventech invested $3 million in TrendsBrands.ru. According to Yutinet.ru managing partner Mikhail Ukolov, if the French fund comes on board, it means the project has good prospects.

Ventech is a reliable, experienced, and highly professional investor, he believes. The company plans to use the investment to expand its line. The decision makes perfect sense: in this market, every item must exist in at least three sizes; otherwise, there is no hope of competing with a giant like Wildberries, for example.

Moreover, about 80 percent of Sartan's sales come from Moscow and St. Petersburg. Only 20 percent of sales come from the regions, since the typical range could be described as “hipsterish” and is not always intelligible to people not in tune with Western fashion.

However, given the increasing demand from outside the two capitals, this state of affairs may change. Sotmarket, for instance, has turned its product strategy inside-out, so that more than 80 percent of sales come from the regions. TrendsBrands.ru’s nearest competitor and clothing e-commerce "lawmaker," Wildberries, is trying to follow suit.

With that in mind, the company will have to significantly expand and revise its product line to appeal to consumers from other cities. Sartan is also eyeing the regions: she is planning a marketing drive with cocktail parties and DJs, to grab a loyal audience of provincial trendsters.

However, experts believe that the store's annual revenue will barely last a year. Thus, errors of judgment cannot be tolerated. Indeed, the very future of the store seems to depend on whether it can satisfy the tastes and quirks of Russia's regional fops.