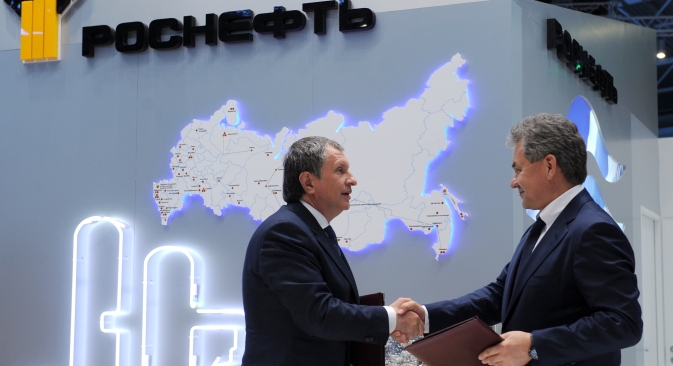 In the last two years, Rosneft has actively sought to bring Russian and foreign companies on board projects in the Arctic shelf. Source: ITAR-TASS

CEO Igor Sechin directed massive growth for state-owned Rosneft in 2012, developing international partnerships in offshore projects, a merger with TNK-BP and a move toward direct long-term contracts. If Gazprom loses its monopoly on exports of liquefied natural gas, as Rosneft expects, the latter will be well-positioned to overtake Gazprom in the next few years.

In 2012, the net profit of Russia's largest oil company, Rosneft, climbed by 7.2 percent to a historic high of $11 billion, according to an IFRS-based company report. The former deputy prime minister, Igor Sechin, who took charge of Rosneft in May 2012, charted a course for growth in all areas.

As a result, by the end of the year, Rosneft’s share price on the London Stock Exchange (LSE) had increased by 41 percent. The company's market value is now estimated at $90 billion, but its real capitalization could be higher — up to $120 billion, as Sechin recently informed President Vladimir Putin. If Rosneft’s CEO is proven correct, Rosneft could leapfrog Gazprom ($115 billion) in just 2-3 years.

In the last two years, Rosneft has actively sought to bring Russian and foreign companies on board projects in the Arctic shelf. In January 2011, Rosneft announced its first Arctic alliance, with Britain's BP. Alongside the development of three fields in the Kara Sea, the agreement contained a clause on a share-swap deal worth $16 billion. The partnership, however, failed to materialize.

Rosneft soon found a replacement for BP in the form of the U.S. company Exxon Mobil. Later, the list of offshore partners was expanded to include Italy's Eni and Norway's Statoil. Rosneft is set to commence exploration of its offshore fields (it owns about 40 licenses), categorically opposing any move by the Russian government to allow private companies access to the continental shelf.

“Rosneft has chosen a convenient method of operating offshore, sharing the risks with foreign companies, which will finance upstream prospecting, provide technology, and grant the Russian state company a stake in various overseas projects," says analyst Andrei Polishchuk of Raiffeisenbank.

Rosneft plans to increase gas production to 100 billion cubic meters (bcm) a year. In 2012, it signed a contract with private gas company Itera to acquire 51 percent of a joint venture between the two firms. The deal raised $2.1 billion in revenue for Rosneft, essentially allowing the company to post record net-profit figures.

Last year, Rosneft also began an active search for gas consumers. In October, it signed a major contract with Inter RAO. Starting in 2016, the oil company is to supply up to 875 bcm of gas over 25 years, under "take or pay" conditions. Moreover, the company expects to see the de-monopolization of liquefied natural gas (LNG) exports. At present, only Gazprom is entitled to export gas.

"Arctic gas could be sold for export only, which means that, sooner or later, other companies will receive the right to sell LNG abroad," analyst Vitaly Kryukov of IFD Capital says. However, he is reluctant to predict when this might happen.

The largest deal of 2012 was Rosneft's buyout of Britain's BP and Russia's AAR Consortium in TNK-BP. Both transactions are expected to close in the first half of this year. They are structured as follows: Rosneft is to pay BP $17.1 billion, plus 12.84 percent of government-owned stock.

BP agreed to buy a further 5.66 percent of Rosneft shares for $4.8 billion ($8 per share). As a result, taking into account its existing share package, BP’s stake in the Russian company will rise to 19.75 percent.

Meanwhile, AAR's 50-percent stake is valued at $28 billion. The synergy effect of optimizing the two companies' production, refining, and marketing operations is valued by Rosneft CEO Igor Sechin at $3.5 billion.

Narek Avakyan, an analyst at AForex, put the synergy estimate higher, at $7.5 billion of additional profit and $60-80 billion of extra revenue each year. Avakyan, however, does not expect the merger of assets to take place before 2014.

No need for intermediaries

Last year, the state-owned Rosneft began to revise its practice of hiring oil traders. This was the reason for the unexpected failure of Gunvor (co-owned by Gennady Timchenko) to win a Rosneft bid last September, which was intended to mediate the sale of oil and petroleum products.

Gunvor had always been one of Rosneft's main trading partners; but against a backdrop of growing demand for Russian oil, the state company seemingly opted for the most economically attractive proposal. The bid was ultimately won by the traders Vitol and Glencore, in conjunction with Shell.

Furthermore, the two traders agreed to help finance the purchase of TNK-BP. In late 2012, Rosneft settled the basic terms and conditions of a long-term contract with both companies for the prepaid supply of up to 67 million tons of oil.

Then, in February 2013, Rosneft reported that it had concluded direct long-term contracts to deliver oil to Poland's PKN Orlen, France's Total, and Anglo-Dutch Shell. A similar agreement is due to be signed with Italy's Eni. These contracts will improve Rosneft's profit margins.

Rosneft's proliferation is such that it needs its own financial institution, the company decided. The result is a fledgling bank created on the basis of financial assets owned by Rosneft — in particular, OJSC Russian Regional Development Bank. The new financial structure will allow the company to implement large-scale international projects and optimize its oil trading operations, according to inside sources.