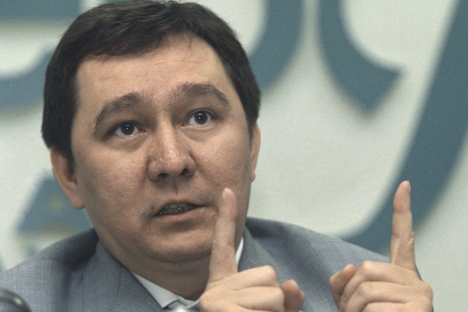 The Russian Trade Representative to the U.S., Rinat Dosmukhamedov: "American experts in innovation field discuss with young Russian entrepreneurs how to obtain loans for innovative projects in the U.S." Source: Kommersant

RBTH speaks to the Russian trade representative to the U.S. and learns the game plan for boosting US-Russia commercial ties.

RBTH sat down with Rinat Dosmukhamedov, Russian Trade Representative to the United States, about the ambitious plans to dramatically increase bilateral U.S.-Russian trade.

Russia Beyond the Headlines: How can the Trade Representation assist Russia's small and medium-sized businesses in working with contractors in the United States?

R.D.: The American market is quite specific and although U.S. customs and tariff barriers are among the lowest in the world, non-tariff barriers and in particular the procedures for certification of goods are quite expensive. Not everyone can afford going through this costly process.

There is considerable interest in legal advice and support at the pre-contractual and contractual stages of commercial cooperation with American partners. Expert assistance in terms of ensuring that imported Russian goods comply with the relevant U.S. non-tariff regulation measures is also in high demand.

At the moment we’re considering a project that involves cooperation between Russian small and medium-sized suppliers and Walmart and we believe it is very promising. Russian manufacturers are becoming increasingly competitive against a background of increased production costs in China.

If we manage to get on Wal-Mart’s shelves, where Russian products, with rare exceptions, are not currently offered, this will be good headway for all of us.

We have already held negotiations and consultations with possible suppliers from the Russian side and we hope that we will find Russian companies that are prepared to risks of going through all the difficult stages of entering the American market. The willingness to take this risk will, in itself, be a guarantee of their success.

We stand ready to help Russian business with legal support and assistance both at the negotiation stage and when contracts are concluded.

It’s worth noting that Russian small and medium-sized enterprises and small production facilities will also be able to bid for United Nations tenders which do not involve the purchase of highly innovative products, but are rather focused on simple items such as blankets, mugs, spoons and so on.

Our companies have practically no experience in this type of dealing with the United Nations and the procedure for participating in the tender is quite complicated. But as I said the Russian Trade mission in U.S. is ready to provide practical assistance.

RBTH: Is there any way Trade Representation can help to attract American investors to Russia’s regions?

R.D.: We have a productive relationship with the government of the city of Moscow and we are working closely with the governor of Ulyanovsk region, Sergey Morozov, who is very optimistic in terms of developing commercial ties between his region and the United States. An example of this mutually beneficial cooperation is the recent agreement to construct an organic dairy plant in this region with over $220 million of American investment.

Tatarstan is also promoting itself in the U.S. and a representative of the Republic of Tatarstan Ministry of Foreign Economic Cooperation and Trade is working within the our Trade mission in Washington, D.C., supervising the republic's projects.

During a recent visit of American companies to the Republic of Tatarstan, an agreement was reached to develop a joint Russian-American product. This will involve an American-produced module being installed on the KAMAZ truck chassis, with post-sales service to be carried out in the country where the product is sold.

In September, during Tatarstan President Rustam Minnikhanov's visit to the United States, a memorandum was signed with Carnegie Mellon University on working together to create a federal level International Educational Center in Russia to train IT specialists as part of the “Innopolis” project which will be almost the same kind of innovation cluster as the well-known Skolkovo.

I would like to note that our American colleagues are now more active in commercial and economic links with Russia. In September, a joint statement by the Russian Minister of Foreign Affairs and the U.S. Secretary of State on strengthening Russia–U.S. interregional cooperation was adopted. So far, twelve states in the U.S. have expressed interest in developing commercial and economic relations with Russian regions.

RBTH: Russia’s share of U.S. exports is less than one percent, while the U.S. share in Russian exports is close to three percent. How will the repeal of the outdated Jackson-Vanik amendment and the establishment of permanent normal trade relations status affect U.S.-Russian trade?

R.D.: American businesses were extremely interested in repealing of the Jackson-Vanik amendment and lobbied hard in order to get it lifted. The repeal will help to eliminate the uncertainty experienced by American companies with respect to the Russian market, and it will directly affect the growth of trade and investments in Russia.

I’m certain that within the next five to ten years, the volume and range of Russian exports to the United States will increase significantly.

RBTH: What can you say about Russian-American cooperation in terms of innovations? What steps are you taking in this area?

R.D.: We are working closely with Rosnano, Skolkovo and companies in California's Silicon Valley. One of the recent events took place in the form of a videoconference between Cisco Systems in Washington, D.C., and Skolkovo University in Moscow.

American experts in this area gave a talk on how to kick off a successful startup in the U.S. and discussed with young Russian entrepreneurs how to obtain loans for innovative projects; what legal assistance is required; how the U.S. patent system works; and how to protect their rights.