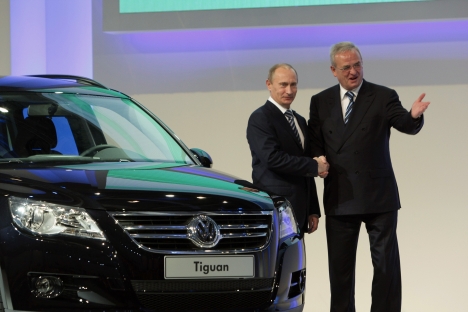 A "utilization fee" on imported used cars has become the new sticking point in relations between Russia and the World Trade Organization. WTO rules and importers of vehicles demand a revocation of the levy, but manufacturers who have their own plants in Russia are keen to see it stay.

In summer 2012, Russia officially became the 152nd member of the WTO. Although the papers have long since been signed, the devil remains very much in the detail. At the annual Gaidar Economic Forum — the first event in 2013 to bring business leaders and politicians to the same table — the dispute erupted with renewed vigor.

In particular, the subject of the heated debate was compliance with WTO rules. Russia's Minister of Industry and Trade, Denis Manturov, restated that Russia had no plans to abolish the utilization fee on vehicles imported into the country and produced on its territory. Moreover, he stressed that vehicles were only the start, and that the utilization fee could be extended to other kinds of industrial goods.

"I am a little surprised that Russian officials still talk about the WTO as some sort of future prospect," said Lamy. "You are already in it! It's time to realize that simple fact and stop picking and choosing which rules to follow. You must comply with all of them."

The WTO head declined, however, to say whether the retention of the utilization fee was in line with the commitments made by Russia after the 19-year negotiation process.

According to Maxim Medvedkov, director of the Department for Trade Negotiations under the Russian Ministry of Economic Development, many member countries of the WTO employ a utilization fee; China, India, and Brazil operate a general ban on the import of used cars, and this causes no widespread discontent.

Meanwhile, immediately after Russia's entry to the WTO, the United States and the European Union filed an official complaint about the country’s utilization fee. In monetary terms, the utilization fee (introduced in Russia on September 1, 2012) remains at the same level as the import duty in force in the country prior to WTO entry: starting at 20,000 rubles ($665) for light automobiles and 150,000 rubles ($4,990) for trucks; the older the vehicle, the higher the fee.

In this regard, the U.S. and the EU have already lodged an official complaint against Russia.

The criticism on the part of American and European importers essentially relates only to used cars. The fee for new cars is minimal, and foreign companies with localized production in Russia are no longer subject to it.

"These companies would most likely prefer to see the fee kept in place," says Oleg Afanasyev, director of public relations at OJSC Kamaz. "Second-hand junk is tough competition for new cars. That's especially true of the truck market. Because of the crisis, many European companies and private dealers are dumping their 'auto junk' at bargain basement prices, which poses a threat to unprotected markets."

Afanasyev estimates that cancellation of the utilization fee could reduce the market share of Russian truck manufacturers and, as a consequence, partially halt production of heavy vehicles.

"Whereas Kamaz currently makes up 34 percent of the Russian truck market, if the fee is abolished, its share could drop to 18-25 percent," he says.

In other words, for both domestic manufacturers and foreign companies with production facilities in Russia, the utilization fee is a question of competitiveness.

The current scheme works this way: In exchange for a used car, owners receive a discount on the purchase of a domestic model or a foreign one assembled in Russia. If second-hand cars were to flood the market, this "exchange" would lose its appeal. Thus, in the opinion of Mikhail Remizov, president of the Institute of National Strategy, the utilization fee encourages localized production in Russia, which, in turn, leads to more tax revenue and employment.

"We understand that the utilization fee is, primarily, a protectionist measure," says Remizov. "The Russian car-market is growing, and the government should use the growth to address some of the structural problems in this area — for example, the localization of production or vehicle compliance with environmental standards. And this is only possible if the government acts as a hands-on regulator."

Nevertheless, according to experts, it is difficult to assess how critical the utilization fee is on a market-wide scale, since it is only one of a range of protectionist tools. Alongside tariffs to bolster domestic production, other kinds of state support are available to businesses.

"The future of the domestic automobile industry depends on the volume of investment in the sector and the right conditions not so much for building vehicles, but for setting up assembly units and producing components that could be used by various companies, both foreign and Russian," says Andrei Biryukov, a member of the board of directors at Yo-auto.

For the time being, Russia has no intention of compromising its interests. According to Pascal Lamy, Russia can still resolve the dispute with the other members of the WTO by "informal" means. Only in the event that a consensus is not reached will the matter be arbitrated officially.

"The philosophy of WTO membership is such: You can break the rules as long as it is advantageous and does not entail penalties,” says Remizov. “Member countries often pursue their own objectives, commit violations, and view them in the context of acceptable risks. The main thing is to possess adequate negotiating and legal mechanisms."

One of the main problems of Russia's WTO membership is not the abolition or retention of the utilization fee, but the effectiveness of the country's above-mentioned negotiating and legal mechanisms. It remains to be seen whether Russia has the capacity — or the will — to develop these processes.