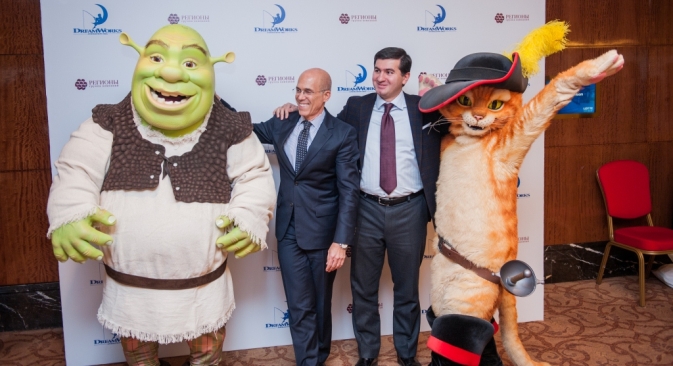 As the Russian entertainment market shows rapid growth, Hollywood's DreamWorks Animation plans to build its first theme parks in the world which will be located in Moscow, St Petersburg and Yekaterinburg.

The Russian entertainment market is showing rapid growth, and the global animation giants such as Hollywood's DreamWorks Animation, Universal Studios and Angry Birds want a piece of the action.

Young Russian businessman Alec Mutsoev, a father of three, breaks into a smile when speaking about the new project. His family co-owns GK Regions — the Russian partner of DreamWorks Animation.

"Seeing my children's eyes sparkle when they watch these animated films makes me want to bring similar joy to other children in Russia, in the form of theme parks," he told RBTH, admitting that he himself was especially captivated by the characters in "Madagascar."

GK Regions, where Alec serves as a board member, is set to build three DreamWorks Animation indoor theme parks in Moscow, St. Petersburg and Yekaterinburg, covering a total area of 10.7 million square feet. The project will cost $1 billion, with 30 percent funded by the company itself and the other 70 percent financed through bank loans. The construction sites for St. Petersburg and Yekaterinburg have already been selected. Negotiations on the Moscow site are still in progress.

Amiran Mutsoev, a relative of Alec's who also sits on the GK Regions board, expects the project to turn a profit after 10 years, given that the parks could receive 11.7 million visitors per year (the three cities are home to approximately 20 million people). The ticket price will be around the market average: $50–80, including all rides.

It is not yet known what attractions will be available, since this is DreamWorks' first project of this kind anywhere in the world. There is no shortage of options, though: "Shrek," "Madagascar," "How to Train Your Dragon," and "Kung Fu Panda" all feature popular characters.

Located next to the park will be shopping malls, restaurants, and movie theaters, as well as a 3-star hotel and a parking lot with 11,000 spaces. The first park is scheduled to open in 2015.

The last few months have been a plentiful time for entertainment projects in Russia. Shortly before DreamWorks' announcement, it was reported that a series of Angry Birds parks would be built in Russia, albeit over a much smaller area (up to 107,639 square feet).

In addition, in December 2012, the Moscow Urban Planning and Land Commission approved the construction of a hotel and business complex in the south of Moscow. The complex is intended to host a theme park for Hollywood's Universal Studios.

The Russian partner in the project will be BIN, and the investment in this single park will be triple that of DreamWorks' three projects — up to $3 billion. Construction is slated to begin shortly. It will be Universal's fifth theme park worldwide and its first in Europe.

Russia is still a niche market when it comes to such projects. Although Moscow offers a number of spacious parks in which to take the kids for a family stroll, these parks are still reminiscent of the days of socialism.

Amiran Mutsoev does not fear the competition from other Hollywood projects. "DreamWorks' characters are the most popular in Russia," Mutsoev said confidently.

He is supported by DreamWorks Animation CEO Jeffrey Katzenberg. In his assessment, last year's "Madagascar 3" was the second most successful animated film in the history of the Russian box office. The picture took more than $48 million in Russian theaters, second only to 20th Century Fox's "Ice Age 4."

"DreamWorks' characters are even more popular in Russia than Universal's or Disney's. Six of the 10 most successful cartoons and animated films were produced by DreamWorks," Katzenberg said at the project launch.

Still, there seems to be room in the sun for everyone. The Russian entertainment market is growing at a rate of 10 percent per year. The year 2011 saw a 12-percent growth in the market (up to $24.1 billion), putting Russia amongst the top 10 fastest-growing entertainment markets in the world, reports PwC.

More than 60 percent of the demand comes from Moscow, St. Petersburg, and Yekaterinburg — the three cities targeted by GK Regions and DreamWorks Animation, says Mutsoev.