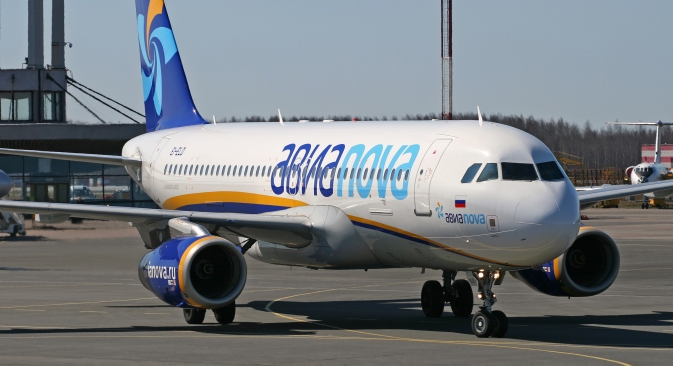 Airline ticket prices for certain routes might be reduced by as much as 30 percent if the government takes a number of measures. Source: ITAR-TASS

A year after the failure of two low-cost airlines, Russia is preparing for the creation of a new budget carrier. This time around, the industry's flagship, Aeroflot, will nurture the new discount airline.

It was not long ago that , and Avianova went bankrupt. The failure of low-cost airlines in Russia had been predicted from the very start — in 2006, when disgraced oligarch Boris Berezovsky founded SkyExpress, and again in 2008, when A1 investment company and American fund Indigo Partners joined forces to put Avianova up in the air.

There are several reasons for the failure in this area. First of all, Russia lacks cheap airports. According to consulting company Leigh Fisher, Sheremetyevo Airport is ranked 12th globally in terms of airport charges. It is four times as expensive as both Malaysia's Kuala Lumpur International Airport and Hong Kong International Airport. As a result, ground maintenance fees account for approximately 17 percent of ticket prices, according to Aeroflot.

Secondly, owning and maintaining an aircraft fleet is expensive, and it accounts for another 22 percent of total costs. The 180-seat version of the Airbus A320 is the most popular model among budget carriers, because of its reasonable fuel economy. However, this model is subject to prohibitive duties in Russia, which (together with VAT) can be as high as 42 percent.

As a result, , each aircraft ends up costing $10 million more, according to a former Avianova chief executive, Andrew Pyne.

Third, airlines are legally obligated to provide certain free services to passengers, such as in-flight meals. According to experts' estimates, introducing baggage fees would shave costs by 5-7 percent, while selling non-refundable tickets would help lower the price of flights by 10 percent.

Former SkyExpress CEO Marina Bukalova recently told journalists that her company had been unable to generate the required revenue, adding that shareholders lost $80 million as a result. Avianova closed down at $38 million in debt; Pyne insists the bankruptcy was a direct result of a conflict between shareholders and nothing else, as А1 did not want to finance more investments or fleet expansion.

Now, Aeroflot has set out to start a new era for Russian low-cost carriers, airline CEO Vitaly Savelyev announced at the end of October. The airline is looking into several options for its low-cost carrier project. One option involves using its subsidiary Donavia as a base. However, Donavia would bring along its old fleet, making it difficult to achieve maximum cost cuts. Thus, another plan envisages setting up a low-cost airline from scratch.

A source at Aeroflot told RBC Magazine that the second option involves a Moscow region base, 11 new Airbus A320 planes, and a route network connecting cities with at least one million inhabitants. “It needs to be a big project in order for it to work,” the source said. “We are counting on a 15 percent share of the civil aviation market.”

According to the source, ticket prices for certain routes could be reduced by as much as 30 percent if the government takes a number of measures, such as allowing the sale of non-refundable tickets, introducing baggage fees, and hiring foreign pilots.

However, some believe that the lack of required passenger volumes is the main culprit behind the difficulties of developing low-cost carriers in Russia. Bukalova previously stated that SkyExpress failed because domestic demand was limited — Russians do not need to fly to different cities.

Her airline never managed to increase occupancy to more than 75 percent. "Monday flights to Sochi in November — which cost 1,000 rubles per ticket — attracted just 40-50 passengers. Nobody wanted to fly," Bukalova said. Russians were not willing to stand in line, even for tickets that cost 500 rubles ($16).

Aeroflot is nonetheless optimistic. "We are in a unique position right now. We have an opportunity to create a market that suits us. We are the market-maker in this segment. 'Super-commuters' (people who work in one city but live in another), sports fans, jet setters, and sophisticated young people are the target audience for our low-cost carrier," the Aeroflot source told RBC.

Despite all the difficulties, it still makes sense to establish a discount carrier in Russia, according to McKinsey & Company partner Dmitry Savitsky.

"One of the most important tasks is to create an appealing product and convince passengers to forego established airlines in favor of a new carrier — with perhaps more cramped seats and no in-flight hot meal service. This can be done either through extremely low prices or by carefully selecting a route network — or else via super-successful marketing efforts," says Savitsky.

The article is abridged and first published in the RBC magazine.