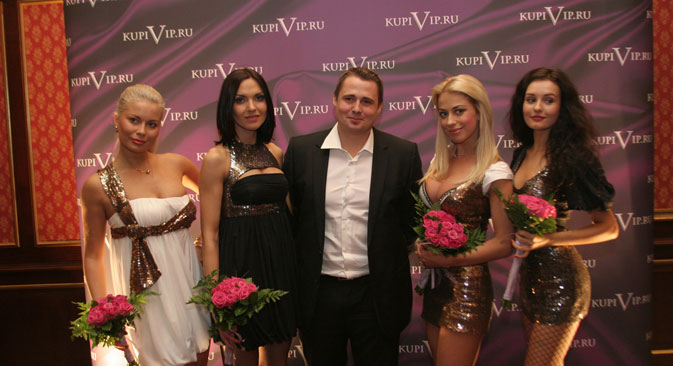 Angel investors and venture capitalists are showing great interest in Russian innovation. There is no shortage of great new business ideas coming out of Russia, offering good ground-level opportunities for savvy investors.

Oskar Hartmann was born in Kazakhstan, a vast land of steppes in Central Asia, but raised in Germany, where he had his first experience of e-commerce – selling health foods to bodybuilders. It was when he came to Moscow in 2007 that he spotted a huge market opportunity: no one was selling designer-label-clothes online to fashion-conscious Russian women.

Raising just €100,000 ($133,000) from his friends and family members he launched KupiVIP, which quickly became Russia’s premier online fashion retailer. The company flourished and, ironically, the economic crisis that hit in its first year of operation was a boon:Hartmann says high-end retailers who saw sales plummet in the depths of the crisis were desperate for new distribution channels.

For all of 2009 KupiVIP was signing up a brand a day. And sales soared. the company clocked up turnover of $50 million last year and expects to be selling hundreds of millions of dollars of goods within a few years, as Russia’s nascent e-commerce business reaches maturity.

Russia’s Internet is on fire, but raising money to launch a company remains a hurdle. In December 2012, 67 percent of Russians aged 12-54 were online, or some 95 million people, according to research firm TNS Gallup, just short of the 70-80 percent Mr. Hartmann estimates is the saturation point for all markets. This is well up from the 24 percent online in 2006, according to pollster VTsIOM.

This fast growth has piqued the curiosity of Russian angel investors, or wealthy individuals, and raising the first $100,000 to $1 million for start-ups is relatively easy, as Moscow has the highest concentration of billionaires in the world. KupiVIP’s rival KupiKupon is also a daily discounter and its four Uzbek founders, all in their 20s, raised $1 million from an Uzbek billionaire after only a few weeks of hunting for financing.

However, getting the next round of investment, between $5 million and $50 million, is the tricky bit.

Today there are only a handful of private equity or venture capital funds operating on the Russian market. By far the biggest is Baring Vostok Capital Partners, which raised a new $1.5 billion fund at the end of 2012 and stands behind some of Russia’s best-known Internet companies, such as Yandex, Russia’s answer to Google.

RBTH has teamed up with Digital October and PwC to compile a groundbreaking rating of the top Russian start-ups (updated twice annually) in IT (191 companies), hi-tech (22) and life sciences (10). The rating uses criteria such as the amount of investment capital attracted, corporate legal protection, presence in the media and team to assign a grade from AAA (highest) to CC (lowest).

All companies must be incorporated in Russia, employ no more than 100 people and be no older than four, five or six years (in IT, hi-tech and life sciences, respectively).

Russia Partners is another domestic fund that has been active in the e-commerce space. These two funds together account for the lion’s share of domestic investments by professional funds into e-commerce.

In addition to the privately owned funds, state-backed lenders are becoming increasingly active. Leading investment bank VTB Capital expanded its private equity division in 2012 and also bought a stake in Fast Lane Ventures, an Internet incubator that has supported several successful start-ups in the past couple of years.

Finally, there are two government-backed funds to provide money to start-ups. The Russian Venture Company has $1.5 billion of federal money to co-invest with privately run funds as the minority partner. And state-owned high-tech agency Rusnano has also managed to bring in several deals.

The big break for high-tech start-ups came with the successful IPOs of Mail.ru, which raised $912 million in London in November 2010, and Yandex, which listed on Nasdaq in May 2011 with a valuation of $11.2 billion. Russian online retailer Ozon.ru, Russia’s “Amazon”, was raising money at the time.

“When we were fundraising in 2010, at first investors were not very interested in Russia, but following the Mail.ru IPO things changed,” says Ozon’s French CEO, Maelle Gavet, who was cited by Forbes as one of the “Women to Watch” in its 2012 survey of the World’s Most Powerful Women. “After that, they were a lot better prepared. They knew a lot more about the Russian Internet and we started to get people calling us,” Gavet says.

How to invest in Russian startups

Now the institutional money is starting to arrive. Investments into Russian high-tech firms more than doubled in value to $550 million in 2011, up from $220 million the year before, according to data from Fast Lane Ventures. Among the big ones were Rakuten, a Japanese venture capital firm, which took a $100 million stake in Ozon.ru; Northwest’s $70 million stake in Avito, an eBay-like website; and a $55 million investment by Bessmer and Russia Partners in KupiVIP.

Ozon’s $100 million was almost immediately spent on buying Sapato.ru, an online shoe store set up by Fast Lane Ventures – the first big exit for the incubator – to add to Ozon’s burgeoning e-commerce business.

In December, U.S. venture capital firm Domain Associates announced a $93 million co-investment with Rusnano subsidiary RusnanoMedInvest (RMI), into Russian pharmaceutical firms Marinus Pharmaceuticals, Lithera and Regado Biosciences. These companies have several new drugs in the advanced stages of clinical trials for the Russian and U.S. markets, including a treatment for epilepsy.

But the fastest growth is probably still ahead. Revenues from Russia’s Internet business are growing at 30 percent a year and the volume of e-commerce is growing even faster: Russians spent an estimated $18 billion on goods bought from online stores, according to a survey by the Russian Association of Electronic Communications and Moscow’s Higher School of Economics.

Hartmann, the KupiVIP CEO, estimates this will rise to $50 billion to $80 billion over the next five years.

“Typically, people start to buy things after they have been online for about three years, and they buy things like fashion after seven years,” Hartmann says. “But Russia’s online population is so young that that seven-year wall has yet to hit. When it does, in the next few years, the market here will become the largest in Europe.”