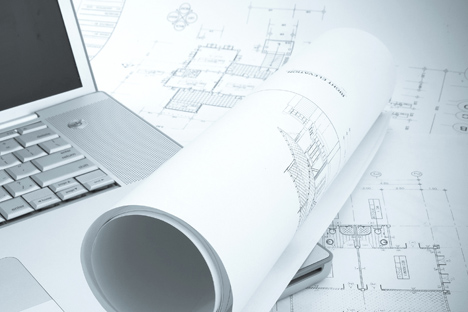 Usually all engineering communications for industrial, office and residential buildings — such as electricity networks, low-power cable systems, sewers, ventilation, etc. — has to be drawn by hand. Sourse: Photoxpress

A team of Novosibirsk State University (NGU) graduates working under the name NETGEN has developed a software program that will make the life of design engineers much easier, cutting the costs of routing engineering networks by approximately one-third.

In 2011, young entrepreneur Alexander Prokudin was looking for advanced programmers for his web project. He did not have to look far; in somewhat of a modern established practice, he found them amongst students of his own alma mater.

His meeting with the talented youth yielded an unexpected result: a discussion of mathematical models led to the understanding that one of the models could easily be applied to certain practical activities. Thus, a theoretical discussion led to the idea underlying the project that creates an intelligent system for designing engineering networks.

“We liked the idea, and we essentially assembled and structured the project from research projects developed by NGU students,” says Prokudin.

The enthusiasts have developed a software program that facilitates the work of design engineers. It has been implemented as a plug-in for AutoCAD — the most widespread software in the industry. According to Autodesk, 550,000–600,000 individuals and companies in Russia and the CIS (and around 8.5 million globally) use AutoCAD for civil engineering.

“Whereas, previously, all engineering communications for industrial, office and residential buildings — such as electricity networks, low-power cable systems, sewers, ventilation, etc. — had to be drawn by hand, our software program can now do some of the work,” Prokudin says.

In layman’s terms, as a building is designed from the ground up, the software automatically routes engineering communications. It suggests optimal routes  and takes into account all of the building codes for low-power systems (fire alarms, telephone lines, Internet cables, etc.), electricity lines (power cables, lighting, outlets, electrical equipment feeds), and sewers and ventilation. Moreover, the software can be used to design buildings of any size — from small structures to giant retail centers.

Russia’s construction sector remains rather archaic, conservative and long overdue for innovation, according to Anna Bodrova, an analyst with the FIBO Group international financial holding. Technological optimization of engineering communications could, for example, cut the construction costs of office buildings in Russia.

The expert believes, however, that such software would rarely work efficiently, unless it receives government support. “In and of itself, a software program that can route engineering communications in fully automatic mode could be a progressive solution for many problems arising at the stage of design and construction.

But, within Russia’s realities, such work would be subject to constant inspections that are not necessarily required. Only if implementation of such software is sanctioned and approved by relevant government agencies could the commercial construction sector make any major progress,” says Bodrova.

Russia’s construction industry is gradually expanding. More than 700 million square feet of housing was built in Russia in 2012, which is 4.7 percent more than in 2011. While no numbers are yet available for newly built commercial space, there is no stagnation there either, if the sheer number of retail centers under construction is any indication.

The technology for optimizing engineering communications remains in demand because it reduces the cost of construction, notes Ilya Rachenkov, an analyst at Investcafe. “Design accounts for no more than 1–2 percent of a construction budget, while connecting a building to all the utilities costs up to 20 percent of the total price,” says Rachenkov. The analyst believes that such would help speed up the process of connecting to requisite infrastructure.

The program’s developers estimate that it would cut design time spent by 60–90 percent and reduce the costs of network routing by up to 35 percent. These are substantial savings as far as large-scale projects are concerned. Prokudin joked that the program even accommodates settings such as “stay within budget.”

The NETGEN project has passed a review by the Skolkovo Innovation Center and is a resident of the Skolkovo (Moscow) and Akadempark (Novosibirsk) technology parks. It has now reached the semi-finals of the Skolkovo Innovation Award All-Russia Contest, which should announce its results in May. The lucky winners will receive big cash prizes — 3 million rubles ($99,000) for the top spot — and an opportunity to find an investor. Out of almost 900 contestants, only 24 have made it to the second round.