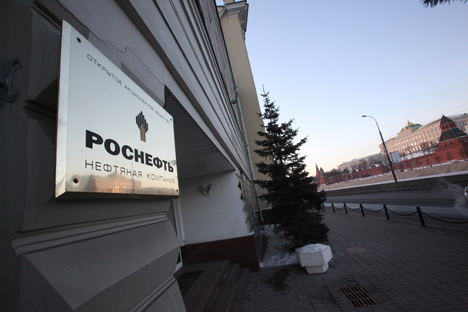 The U.S. could outstrip Russia and Saudi Arabia in terms of oil production this year

The shale oil revolution, led by U.S. development, means major changes for the global energy market. Experts say the price of oil could drop sharply, decreasing Russia's GDP by 1.2–1.8 percent. Major oil exporters in Russia and the Middle East need to catch up the U.S., to avoid substantial long-term losses.

PwC projects that, by 2035, annual production of shale oil could reach 14 million barrels per day (12 percent of total global oil production). At the same time, the U.S. Department of Energy estimates that 1.2–4 million barrels of that amount will come from U.S. producers. In its annual report, “Energy Outlook 2030,” BP stated that the rapid increase in shale oil production could enable the U.S. to overtake Russia and Saudi Arabia as early as this year.

The breakthrough will put pressure on oil quotations. PwC analysts believe that, in 2035, prices will be 25–40 percent lower: $83–100 per barrel, against the $133 per barrel forecast by the U.S. Department of Energy (EIA).

By 2035, shale oil could allow global GDP to climb by 2.3–3.7 percent (an increase of $1.7–2.7 trillion, based on current GDP). The economies of individual countries will reap the reward. In particular, oil importers, such as India and Japan, could see GDP rise by as much as 4–7 percent, while the U.S., China, Germany, and Britain could add around 2–5 percent.

"On the flip side, major oil exporters, such as Russia and the Middle East, may suffer significant long-term losses if they do not start their own large-scale development of shale oil," says John Hoxworth, chief economist at PwC and a co-author of the report.

The Russian oil and gas industry employs a broader term: "hard-to-reach oil reserves." It covers not only the production of shale oil, but also clay oil, as well as other source rocks. Russia holds an estimated 25–50 billion metric tons (27.5–55.1 billion short tons) of these stranded reserves.

Nearly all Russian companies have projects to produce "difficult" oil, but they are at a very early stage of development. The main deposits of shale oil are concentrated in the Bazhenov Formation in Western Siberia, which is being targeted by Russia's oil companies. To spread the financial risks and, moreover, to employ the right technologies, they are looking to engage foreign partners.

TNK-BP explained to RBTH that it hires oil service companies to assist in the development of stranded reserves, since their hi-tech services and unique engineering solutions play a crucial role. For example, the company works closely with Schlumberger. Seven projects have been selected for pilot development. Some are already in play at the Kamenny, Em-Egovsk, Severo-Khokhryakovsk, and Samotlor fields.

The Russian oil company Rosneft has 27 fields in Western Siberia (the Achimov, Bazhenov, and Tyumen formations), with estimated stranded oil reserves of 1.8 billion metric tons. Additionally, the Russian company has struck a deal with ExxonMobil to develop 23 more sites. One of its other partners is Norway's Statoil.

Salym Petroleum Development — a joint venture between Gazprom Neft and Shell — plans to develop the Verkhne-Salym oil field. Gazprom Neft also has its own projects at the Krasnoleninsk field; drilling of the first appraisal well began there in January.

BP forecasts that, by 2030, shale oil could account for more than 10 percent of Russia's total production. According to analyst Vitaly Kryukov of IFD Capital, the production schedule for hard-to-reach oil depends on a range of factors.

First, companies need to understand the geology of such projects. The level of difficulty ranges from relatively easy in the U.S to fairly complex in China and Russia.

Second, tax breaks should be granted for such projects, he notes. The Russian government is in the process of approving a bill to establish preferential rates of mineral extraction tax.

"Russian companies are active in the production of shale oil. It's wrong to suggest that we have missed the boat," says Gazprombank analyst Alexander Nazarov. "Besides, we still hold sufficiently large volumes of conventional oil."

The expert asserts that foreign companies with experience of hard-to-reach oil are keen to enter the Russian market, and that the technologies can also be bought.

"Overall, Russia can get a grip on the market and overtake the U.S. within a five-year time frame," says Nazarov. The only snag could be that hard-to-reach deposits in Russia are, on average, less logistically accessible that in the U.S. and Europe.