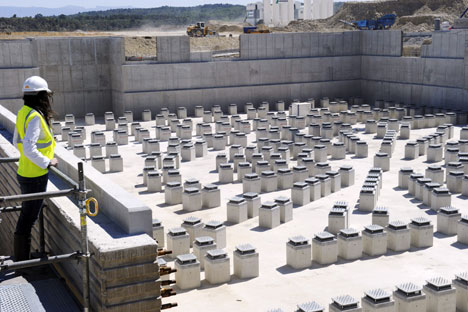 Bright sparks: the most efficient fusion reaction to reproduce in a laboratory is between deuterium and tritium. Source: AFP / East News

A new thermonuclear reactor — the product of years of negotiation and research among scientists and officials from around the world – is being constructed at Cadarache in southern France.

Known as the International Thermonuclear Experimental Reactor (ITER), it is the first large-scale attempt to create power from nuclear fusion, the same kind of thermonuclear reaction that takes place in the sun.

Unlike traditional nuclear reactors, which consume rare and often hazardous resources, Iter will require only two basic components to operate: seawater and lithium. Additionally, the major by-product of the fusion reaction is harmless helium.

The ITER project dates back to 1985, when nuclear physicist Yevgeny Velikhov approached European, American and Japanese scientists, on behalf of the Soviet Union, with the idea of creating a joint thermonuclear reactor. Later that year at the US-USSR Geneva Summit, the parties agreed to the development of fusion energy; one year later in Reykjavik an agreement was made to jointly pursue the design of a large fusion facility, ITER.

Although Iter is a joint project, the responsibilities and costs are not distributed evenly. The total cost of the project is around €13 billion (about $ 17 billion). The EU countries contribute about 50 percent of the project’s finance and technology, with the other nations contributing about 10 percent each. Russia’s share is provided in the form of hi-tech equipment.

Russia is also responsible for much of the know-how behind the project. Iter is based primarily on the Soviet-era tokamak reactor, first developed during the 50s and the 60s.

The most efficient fusion reaction to reproduce in a laboratory is the reaction between two hydrogen isotopes, deuterium and tritium. This reaction produces the highest energy gain at the lowest temperatures. At extreme temperatures, electrons are separated from nuclei and a gas becomes a plasma – a hot, electrically charged gas.

A tokamak reactor uses magnetic fields to contain and control the hot plasma. The fusion between deuterium and tritium produces one helium nucleus, one neutron, and energy.

The helium nucleus carries an electric charge which will respond to the magnetic fields of the tokamak and remain confined within the plasma. However, some 80 percent of the energy produced is carried away from the plasma by the neutron which has no electrical charge and is therefore unaffected by magnetic fields.

The neutrons will be absorbed by the surrounding walls of the tokamak, transferring their energy to the walls as heat.

Technological developments from every partner were necessary to create Iter. Russia agreed to produce a number of systems for the reactor, including part of the first wall, which is made from beryllium, a metal used in superconductors.

The main Russian supplier of superconducting materials for the international thermonuclear reactor is Chepetsky Mechanical Plant, a subsidiary of Rosatom’s fuel company TVEL. Russia will provide about 20 percent of the superconductors required for ITER.

The agreement that established the international consortium to construct the reactor stipulated that the project would make use not only of technologies currently in use worldwide, but also new technological breakthroughs in the field that would be developed as the project moved forward.

“Iter will have double benefits for each participant,” says Leonid Bolshov, director of the Nuclear Safety Institute at the Russian Academy of Sciences.

“On the one hand, they will have a reactor of the future and a power plant that will meet the electricity requirement of developed economies for many years to come.

“On the other hand, while working on the project, which is unique in its complexity, the countries will share competencies and benefit from new technologies that could be used in different spheres.”