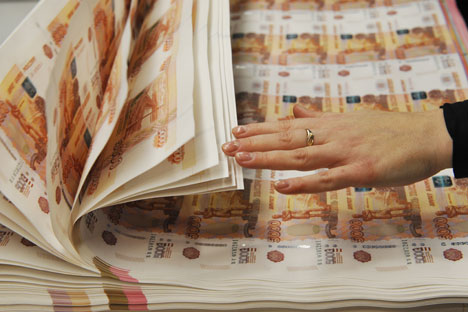 Illegal money transfers from Russia reached $49 billion in 2012 or 2.5 percent of the country’s GDP, with almost half of that sum sent out by a single group of "well-organized" people, central bank chief Sergei Ignatyev said

Illegal money transfers from Russia reached $49 billion in 2012 or 2.5 percent of the country’s GDP, with almost half of that sum sent out by a single group of "well-organized" people, central bank chief Sergei Ignatyev said on Wednesday.

“This could be payment for the delivery of drugs… payments for grey imports … bribes and kickbacks for officials or managers making purchases at large private companies with ineffective internal controls. Or this may involve tax evasion schemes,” Ignatyev said in an interview with Vedomosti business paper.

Ignatyev said $14 billion of that $49 billion was transferred to foreign accounts abroad in trade operations, while $35 billion involved capital operations referred to as “dubious” in the balance of payments and included in the capital outflow count.

Russia’s net capital outflow reached $56.8 billion last year - therefore indicating that up to 60 percent of money which left Russia was brought out illegally.

“Also, our analysis shows that more than half of all dubious operations are held by firms directly or indirectly bound by payment relations with each other. The impression is created that all of them are controlled by one well-organized group of people. If the law-enforcement agencies concentrate their efforts considerably, they will be able to identify these people and also the beneficiaries of these operations,” Ignatyev said.

Under the central bank’s methodology based on international standards, dubious operations involve export revenues that were not received on time, the cost of goods and services prepaid but not received under import contracts, and money transfers abroad under fictitious operations with securities and loans.

The volume of dubious operations has stayed steady at 2 percent of Russia’s GDP in the past four years, the central bank estimates.