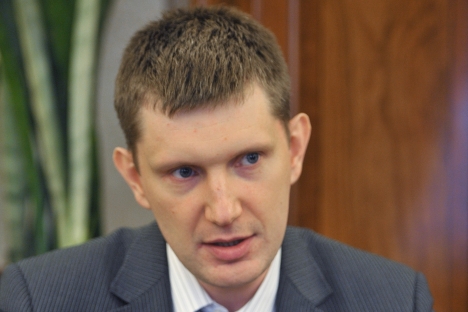 How to transform Moscow into a global financial center? Head of Moscow’s Department of Economic Policy and Development, Maksim Reshetnikov, discusses the issue.

Officials have long been planning to turn Moscow into a “World Financial Center.” The location of the headquarters, of which there may be many, has been left up to the financiers. Municipal authorities are tasked with improving the urban environment generally. Head of Moscow’s Department of Economic Policy and Development, Maksim Reshetnikov, discusses the issue.

RBC Daily: A recent conference was held on preparations for the G-20 summit, which will take place in Moscow this year. What did foreign experts say about Moscow’s chances of becoming a world financial center?

Maksim Reshetnikov: “You should attend to the city in the first place. If you have the city, you’ll have everything else.” That’s what a former leader of the state of Hesse, where Frankfurt-am-Main is located, said.

Creating a World Financial Center (WFC) is one way to introduce global quality-of-life standards in Moscow; it is part of the strategy aimed at improving the urban environment. We’re not doing it just for the foreigners who come here, and we’re not doing it for top-flight specialists. We’re doing it for everyone who lives in the city.

It’s the responsibility of the authorities to make the city comfortable for the people who live here.

RBC Daily: Where does the WFC come in?

M.R.: The WFC status means that we seek to achieve the highest standards. We want to create conditions that would suit the most demanding professionals — people who can afford to choose where they live from amongst the world’s best cities. We should put Moscow on a par with these cities.

Everyone notes that the city has become more and more difficult to live in over the past five or six years. Everyone understands that it will be hard to reverse this trend. Money alone will not solve all the problems we face. There needs to be a change in the way people behave — the way they behave on public transport and on the roads.

RBC Daily: The search for a site for the WFC continues. Initially Rublyovo-Archangelskoye was proposed. Now the talk is about Kommunarka…

M.R.: There will definitely be a major office and business center at Kommunarka. Similar centers will be set up in Rublyovo-Archangelskoye, Skolkovo and Salaryevo, because the city is interested in creating world-class jobs in the outskirts. You cannot have people from the entire Moscow metropolitan area commuting to the center every day; a counter flow should be created.

As to where the biggest number of banks will be located, it is up to the financial community to decide. It has a powerful self-regulating mechanism. If the bankers say, for example, “we’ve made our decision, we‘ll go to such and such a place and we’ll need such and such federal agencies there,” I think the federal government will study these proposals and make the relevant decisions.

RBC Daily:So, Moscow is not going to have its own Wall Street or downtown — places where all business life will be concentrated?

RBC Daily: But there is no stock exchange there. There are offices, apartments and trade centers.

M.R.: Several big banks have their headquarters there. All the city can do is to create the proper conditions: for example, offer enough office space and good transportation between various parts of the city. But Moscow does not own the stock exchange and it cannot tell it where to move.

RBC Daily:What else can Moscow do to lure foreign specialists from London, New York or Frankfurt to Russia?

M.R.: First, there is a niche in a number of regional financial centers. A Turkish businessman who spoke at the conference said his company was building several glass factories in Russia. While his firm had originally been planning to locate them in London, it has now decided in favor of Moscow because its business is here. The company is aware of the risks, but thinks they are worth taking.

RBC Daily: How would Moscow benefit from the creation of a WFC? Have any targets been set?

M.R.: At present, the share of the financial sector in the city’s economy can be measured by profit tax, which amounts to 55 billion rubles [$1.8 billion], or about one-sixth of all profit tax collection. That accounts for about 5 percent of all tax revenues, plus personal income tax: financial institutions usually pay very reasonable salaries.

The next indicator is the demand for real-estate, upscale real-estate, and taxes. Financial organizations form the demand, which is then transmitted down the chain, starting with cleaning companies and ending with legal firms.

RBC Daily: Have any deadlines been set for the creation of the WFC and how is cooperation with the federal agencies proceeding?

M.R.: The WFC is not the Olympic Games or the World Cup. We will work as long as it takes, but not eternally. Of course there are some cut-off points. The issue is under the control of the president and the prime minister.

The interview is first published in Russian in RBC Daily.