Ministry of Natural Resources stocking up on reserves 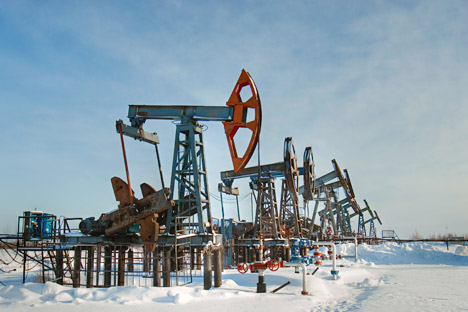 The Ministry of Natural Resources has drafted a program for the replenishment of natural resources for the years 2013-2020. Source: ITAR-TASS

The Ministry of Natural Resources to present a state program for a 25 percent increase in Russia’s oil and gas reserves.

Russia’s energy reserves will increase by one quarter over the next seven years, according to the goals of a Ministry of Natural Resources draft program for the replenishment of natural resources. Around $98 billion will be spent on exploration and development. Experts estimate that Asia and South America will provide demand for the resources.

The Ministry of Natural Resources has drafted a program for the replenishment of natural resources for the years 2013-2020. Natural Resources Minister Sergei Donskoi presented the program to the open government on Tuesday, Feb. 26, with the Cabinet scheduled to consider it shortly afterward.

The document focuses on the replenishment of the mineral resource base and the exploration of subsurface resources. In particular, it spells out financing for exploring the continental shelf.

“The nation’s mineral resources remain the basis for funding Russia’s budget and maintaining the country’s export potential,” the ministry stated in a brief.

Russia’s deposits are becoming depleted, however, as almost 60 percent of its fields contain just 0.3 million tons of recoverable reserves each. Less than one percent of deposits contain reserves in excess of 15 million tons, with geological exploration and production activity moving into remote areas with undeveloped infrastructure.

The Ministry of Natural Resources is proposing to turn the situation around by spending $98 billion (3 trillion rubles) on replenishing natural resources.

According to the ministry’s estimates, those investments should increase the value of the key subsurface resources at global market prices by $5.6 trillion (173 trillion rubles). This will also increase budget revenues from the mineral resource extraction tax — as well as from other direct levies on the use of resources — by 35-40 percent.

Rustam Tankayev, a leading expert at the Union of Oil & Gas Producers of Russia, said that boosting reserves by the volumes announced by the Ministry of Natural Resources was feasible.

“But, as far as natural gas is concerned, building up reserves and output only makes sense in certain regions that lack their own gas, such as Timano-Pechora or Tatarstan,” he said.

“At the same time, Russia is having trouble selling the 600 billion cubic meters it produces now,” said Tankayev.

This mainly has to do with Gazprom’s declining exports to Europe. Russian natural gas is the most expensive in Europe (the average selling price last year was $402 per 1,000 cubic meters), and European customers are trying to cut down on consumption. This is especially true for Ukraine, which has lowered its order from 52 billion cubic meters under the original contract to 20 billion cubic meters.

Tankayev was skeptical in his assessment of the outlook for offshore hydrocarbon exploration, pointing out that not only Russian but also global oil companies lack safe offshore production technology.

The Oil & Gas Center research director at Ernst & Young Moscow, Denis Borisov, also noted that, in terms of proven reserves, Russian vertically integrated oil companies are far ahead of global public majors. While the average reserves-to-production ratio of Russian companies is 22 for all oil and gas reserves, and around 19 years for liquid hydrocarbons, the global numbers are 13 and 12 years, respectively.