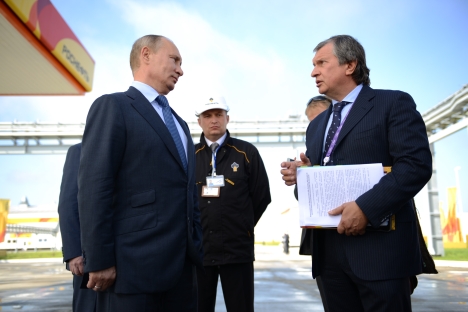 Rosneft expects to complete the purchase of TNK-BP by Apr. 1 and retain the latter’s best employees.

Rosneft President Igor Sechin has requested that TNK-BP’s acquisition be completed by Apr.1, instead of Jul. 1. Sechin himself is heading an integration committee that plans to meet in early March to work out the consolidation strategy. Rosneft plans to keep TNK-BP’s top managers, though many intend to quit after the company changes hands.

The board of directors of TNK-BP has approved an outline for cooperation with Rosneft, according to TNK-BP CFO Jonathan Muir.

“We have reached a preliminary agreement on a framework for working jointly with Rosneft management on the matter of integration,” said Muir on Mar. 1, adding that “the first step would be to sign a non-disclosure agreement.”

“A structure for TNK-BP and Rosneft management teams to work together will be established. We still have two companies, but we have to start thinking about anti-trust issues,” Muir said.

A Rosneft spokesperson noted that key governance bodies in charge of managing integration have been set up, including a steering committee, a coordination headquarters, a secretariat, and 21 working groups for various business and functional areas that are directly responsible for the outcome of the integration.

Rosneft expects to complete the acquisition of TNK-BP by Apr. 1, rather than by the original Jun. 1 deadline. “This is what Rosneft President Igor Sechin has requested,” a source told Kommersant, adding that the acceleration of the acquisition process had to do with the need to pay interest on the deal to the sellers, BP and AAR.

A specially established integration committee, headed by Sechin himself, is working on a consolidation strategy. Its members include BP CEO Bob Dudley, Rosneft First Vice President Eduard Khudaynatov, and the prominent expert Daniel Yergin, author of “The Prize: The Epic Quest for Oil, Money, and Power” — an iconic book among oil industry employees. Rosneft said the committee should meet in early March “to definitively work out the ways to integration.”

There are three stages to the integration process. “The first stage is for Rosneft to become ready to establish control over TNK-BP and to ensure its continued operations; the second stage is to develop a target management model, which should be completed by July 1; full integration should be completed by January 1, 2014,” a source told Kommersant.

Rosneft intends to establish control over assets, key commodity flows, purchasing, financial resources and balances as early as Apr. 1. Also, by Jul. 1, Rosneft should complete the allocation of post-integration roles and responsibilities among Rosneft managers, determine key optimal management principles, and draft the united company’s business plan and budget for the second half of the year.

After Jul, 1, the state-owned company intends to review results, assess the performance of the asset management system, and draft a business plan for 2014.

The board of directors of TNK-BP has already started coordinating its key decisions with Rosneft. That being said, its shareholders are still able to decide certain things on their own. For instance, TNK-BP paid shareholders $2.8 billion in dividends in 2012, even though Sechin had stated in the fall that “all the money is ours.”

According to a source close to TNK-BP, the company’s managers perceived Rosneft as a direct rival down to the very last moment. “But at the most recent board of directors meeting, the shareholders asked them to change their attitude. It appears that now many decisions will need to get cleared directly over the phone,” the source told Kommersant.

Not everyone at TNK-BP is happy about this. “People are already saying that they will quit once the company changes hands,” one source said. At the same time, Rosneft has promised “to keep the best people.” The company said some TNK-BP managers would be transferred to Rosneft’s headquarters and that this process is already successfully underway.

“We are glad to welcome new employees. Some Rosneft managers will become heads of relevant departments at TNK-BP headquarters and will also become heads of its subsidiaries,” a Rosneft representative said.

It will take a couple of months to set up an organizational and functional framework, but a full integration of both companies is several years away, according to Dmitry Ivanchenko of Strategy Partners. He is confident that synergy can be achieved across all business areas — but it will be particularly strong in the area of oil refining.

Ivanchenko notes that, once the integration is complete, Rosneft will become Russia’s number one producer of aviation kerosene and motor oil, and it will also have the opportunity to become a leader in bitumen output.

The article is published in Russian in Kommersant.