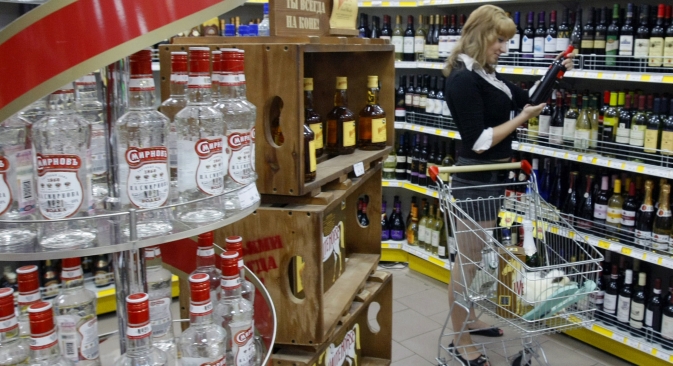 Young professionals in Moscow and St. Petersburg are increasingly switching from vodka to wine and beer. Source: ITAR-TASS

Russians’ legendary capacity for hard drinking is finally being challenged – by a changing work ethic and a Kremlin crackdown.

Faced with Russia’s alarming demographic decline, the government is getting serious about tackling the country’s legendary love of strong liquor. This January, stiff new taxes saw the cost of vodka soar, while harsh restrictions on retailers banned over-the-counter alcohol sales after 10 p.m.

Vodka consumption has been falling in recent years, although contradictory forces mean the fall has not been even. Over the past four years, Russians’ consumption of vodka has officially fallen by 7 percent, to 417 million gallons in 2012 from 449 million gallons in 2009. That still leaves the average at 3.2 gallons per person annually – putting Russians among the hardest drinkers in the world.

However, consumption is forecast to fall faster this year, to some 365 million gallons (2.6 gallons per person).

Alcohol and smoking are the two biggest killers in Russia, accounting for about half of all deaths, according to the World Health Organization. The government, increasingly worried about the impact on economic development, is stepping up its campaign.

Not that you would necessarily notice. There has been no public awareness campaign: Reducing drinking has been a risky political issue ever since Soviet leader Mikhail Gorbachev’s 1980s anti-alcohol campaign was widely derided, following draconian rules that limited sales to between 2 p.m. and 7 p.m.

(It briefly led to a fall in alcohol-related deaths, but later this rose after people turned to bootleg vodka and even worse homemade alternatives. To this day, Gorbachev is perhaps most hated by ordinary Russians because of his dry laws.)

The government’s most effective measure so far has been to shut down many moonshine factories, which accounted for an estimated third of vodka production, according to Vadim Drobiz, director of Russia’s Research Center for Alcohol Markets.

“The [authorities] have gotten serious about illegal production of alcohol, and a lot of illegal plants have been closed by the regulator recently,” agrees Daria Khaltourina, co-chair of the Russian Coalition for Alcohol Control, who estimates that the consumption of hard liquor began to fall in 2005.

“Also, there is a ban on selling alcohol at night, so there are fewer opportunities to buy it whenever you want. All in all, the government’s alcohol policies may be more spontaneous than well thought-out, but they’re working,” Khaltourina said.

But while Russia’s middle class is becoming increasingly health conscious and switching to lower-alcohol drinks, such as wine and beer, rising incomes have led some Russians to drink more.

“The emerging middle class indeed drinks less, but the richest and the poorest drink more as their incomes rise,” says Drobiz.

“The government has become increasingly concerned about the public’s health, as it has realized that population decline is a serious threat to the long-term development of the economy.”

Many Russians’ incomes have continued to rise since the 2008 economic crisis, due to high energy revenues and increased government spending, and while overall vodka consumption has been falling, the change is not smooth: Consumption rose again between 2010 and 2012 by 6 percent, which is part of the reason why the government has decided to act so forcefully.

However, some underlying changes in society could help. The changing work ethic has already had a big impact on drinking habits: In Soviet times, a regional manager who needed extra resources from the state would simply turn up in Moscow to meet with officials, armed with a bottle of vodka and some sausage.

“There is an emerging class of young professionals who are changing the work ethic,” says Khaltourina, a 34-year-old sociologist who is a strong advocate of healthy lifestyles and education as a way of improving economic development. “In the past it was a common thing to drink at the workplace, to discuss business over a drink. Now it’s banned in most offices.”

There is also a big difference between the sophisticated urban populations of Moscow and St. Petersburg, which lead the way in lifestyle changes, and the rest of the country, where Soviet-era habits have persisted.

“People in big cities are richer and better educated and overall have a different lifestyle,” says Khaltourina. “In Moscow the level of alcohol intake, health problems and deaths caused by alcohol are very close to the European average. But provinces still have the horrible drinking habits typically found in northern countries: bingeing on huge amounts of alcohol.”

While an overt anti-alcohol campaign may be unpopular, the government has to stick to its guns if it wants to avert a demographic disaster. Since 1991, Russia’s population has shrunk by 5 million people to 143 million, and last year was the first time in two decades that the number of births exceeded the number of deaths, if only by a small amount.

The government has for several years been trying to address this by investing more into pre-natal and maternity healthcare, and the new rules on vodka represent the next phase in a campaign to improve public health.