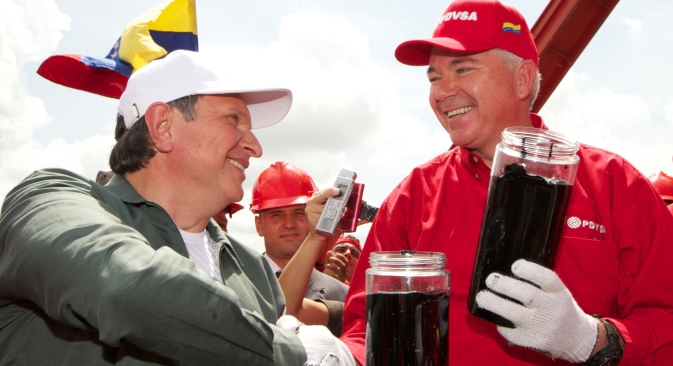 The death of Hugo Chavez has placed a big question mark over many Russian projects in Venezuela. The government asserts that all agreements will remain in force, but independent experts fear the Venezuelan opposition could seek to unravel the Chavez deals, reserving the best projects for the U.S.

On hearing the news of Hugo Chavez’s death, Russia’s minister of industry and trade, Denis Manturov, told Russian reporters that the possible shake-up in Caracas should not affect Russia's agreements and contracts with Venezuela.

"We signed contracts with the state. Therefore, our Venezuelan partners have certain commitments. I have no fears. We hope to retain constructive, cordial relations with Venezuela, whatever happens," said Manturov, who was one of three high-ranking Russian officials President Vladimir Putin selected to represent Russia at the Venezuelan leader's send-off.

Russian companies have long been welcome guests in Caracas. Cooperation is developing in all spheres — from flowers to fighter jets. For instance, Venezuela is second only to India in its procurement of Russian arms. As of early 2013, the agreements concluded between the two countries were estimated by the state intermediary agency Rosoboronexport to be worth $11 billion.

Cooperation in the civil sphere is even broader. Venezuela was the first country in Latin America to set up a joint venture with Russia. The project was approved in 2009. In the middle of 2012, Chavez reported that the project’s dividends had already reached $5 million.

Russia and Venezuela signed five documents outlining a series of offshore oil and gas projects, the creation of new joint-ventures, and the purchase of Russian-made drilling equipment, including offshore platforms. Plans existed to involve Russia's Uralmash in one of the joint ventures, and the construction of 50 drilling rigs was also proposed.

Russian contractors are engaged in the assembly of standard panel housing in Caracas. The project includes infrastructure and the creation of nine joint-ventures to produce building materials. Negotiations are also under way for the completion of a series of nuclear power plants, which were put on ice after the Fukushima tragedy.

However, the most progress has been made by the state corporations Rosneft and Russian Technologies (Rostechnologia). It is no coincidence that the heads of these companies — Igor Sechin, in the capacity of special representative of the president, and Sergei Chemezov — were part of the delegation, alongside Manturov, at Hugo Chavez's farewell.

Russia's largest oil company Rosneft has signed numerous agreements with Venezuelan companies and owns 40 percent of National Oil Consortium, which is due to develop the Junin-6 field.

As for Russian Technologies, in addition to supplying arms, it has managed to penetrate the Venezuelan market with its subsidiaries' products, too. For example, June 2012 saw the signing of an agreement to manufacture passenger buses in Venezuela, based on a chassis developed by KAMAZ (of which Russian Technologies is the main shareholder). The Russian team of constructors specifically designed the chassis to adapt fully to the local environment.

Over the past 11 years, Caracas has become a critical strategic partner of Moscow in Latin America. Senior analyst at RIKOM-Trust, Vladislav Zhukovsky, estimates Russia's investment projects in Venezuela to be in the area of $22-25 billion, while other experts put the figure closer to $30 billion.

"There is no doubt that the demise of Chavez will force the Kremlin to adjust its plans. Given the political and economic risks facing Russia's largest oil and gas companies, they will try to freeze their investment agreements and ongoing projects, since it is far from certain that Hugo Chavez will be succeeded by his associate and interim president Nicolas Maduro," says Zhukovsky.

"All eyes are focused on what will happen next," says Ivan Kibardin, chief specialist of the securities division at Intercommerce Bank.

He recalls that Chavez won the last election by a relatively small margin — about 9 percent.

"If the opposition came to power, it is highly likely that the country would change its political, and hence economic, course. In such case, it would probably impact Russia's arms contracts and complicate further investments in the country," Kibardin says.

He adds that the "black gold alliance" between Russian oil companies and Venezuela was not in any danger, since its importance — at least for the next couple of decades — is understood by all. If Nicolas Maduro does succeed in becoming Venezuela's next leader, things will remain roughly the same, according to the analyst.

"But there won't be another Chavez. And even if Russia stays on its economic pedestal, there will probably be a rapprochement with the United States," says Kibardin.

Most pessimistic of all is Konstantin Simonov, director of the National Energy Security Fund. He believes Russia can hold on to its Venezuelan projects only in two cases: either a Chavez supporter wins the election, or the military comes to power as a result of a failure by the current government and opposition to reach an agreement. If the opposition wins, he believes that Russian companies will have to pack up and leave, to be replaced by U.S. firms.

"Chavez kicked the U.S. out of Venezuela without compensating any of its companies,” says Simonov. “If the opposition wins the election, then it's goodbye to all the petrorubles. It will be a repeat of the Libyan scenario, when Russia's friendship with Gaddafi led to all its projects being suspended.”