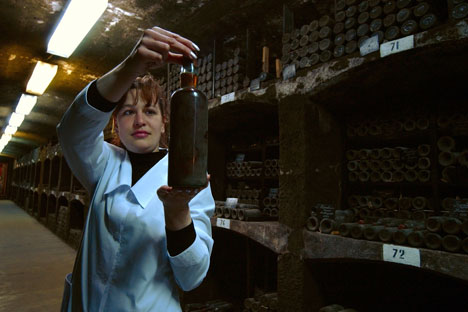 The winery has the capacity to produce 1,200 bottles annually; but it made only half that number in 2012, because of a lack of established sales channels. Source: ITAR-TASS

The Russian winemaker is looking for an investor to help it develop new sales channels and increase output. However, the company is not selling a controlling share, which is why Russian investors have been hard to find. Experts say such high-quality Russian wines have good potential, but they may need state support as well.

The owners of Chateau Le Grand Vostok (CGV) — Russia’s leading premium winemaker — have put up to 49 percent of equity in its parent company, OAO Avrora, up for sale. The winery is planning to seek a prospective investor in London, in the hopes of raising $6.5 million for the expansion of production and sales.

Elena Denisova, chairman of the board of directors at Chateau Le Grand Vostok, said that insufficient working capital was preventing the company from achieving its full potential. “We are doing this not because we are in any kind of financial trouble or poverty,” said Denisova. “As far as we are concerned, Chateau Le Grand Vostok has considerable upside potential: our brand awareness is way ahead of our company’s product availability in retail channels.

“In other words, people know about our wines and are eager to buy them, but they often don’t know where they can do so. Also, as the wine market becomes more orderly and anti-counterfeit enforcement is improved, the market for our products will expand substantially. It’s for this positive outlook that we have to prepare by raising inexpensive working capital and investment,” Denisova said.

The winery has the capacity to produce 1,200 bottles annually; but it made only half that number in 2012, because of a lack of established sales channels. CGV will use the proceeds from the sale to become represented in retail chains on a regular basis and, thus, to achieve full capacity utilization.

“Our main shareholder would like to sell up to 49 percent of the company’s equity,” said Denisova. She noted that a potential investor is being sought via an offering through an electronic exchange in London. They have been unable to find a buyer for the stake in Russia. “Originally, we didn’t want to offer the stake for sale on a broader market, as we were considering options for finding a Russian investor; but, once the close circle of prospective investors was exhausted, we went international,” she said.

The challenge of finding a buyer in Russia for a partial stake derives from the fact that Russian investors have traditionally been wary of putting money into businesses they cannot fully control: “This is largely caused by Russia’s weak corporate legislation creating additional risks for prospective minority shareholders,” said Denisova.

According to the SPARK-Interfax database, ZAO NTTs Impuls Tekhnologii holds the biggest equity stake in OAO Avrora (24.4 percent), while the remaining shares are held by individuals. The company owns 4,200 acres of agricultural land 25 miles from Anapa.

Artur Sarkisian, head of the Sommelier Union, is confident that quality Russian wines — including those made by CGV — will soon take a prominent place in wine stores and on restaurant wine lists. “Now that Russia has started making good wine, it’s only natural for it to be represented in both restaurants and in broader retail chains,” said Sarkisian. “But, for this to happen, the state should support domestic wines — even by administrative measures.”

Sarkisian cited the example of Krasnodar Territory, where the local government requires restaurants to source at least 50 percent of wine lists in Russia. “For Russia as a whole, this threshold could be set at 20 percent, with the same administrative measures taken with regard to retail stores,” Sarkisian said. He noted, however, that, in order to preserve the reputation of Russia’s winemaking, a broad-based jury of experts should certify the products of companies wishing to qualify for such a state support program.