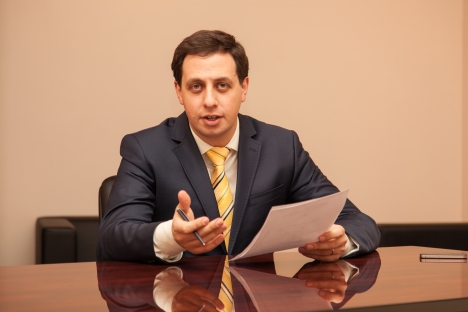 Russia’s Deputy Minister of Communications Mark Shmulevich spoke to RBTH about peculiarities of the Russian IT sector.

Russia’s Deputy Minister of Communications Mark Shmulevich spoke with Elena Shipilova of RBTH about how IT can become Russia’s leading non-resource sector in terms of export volumes, what to do in order to make the profession attractive among young people and what foreigners can learn from their Russian counterparts.

Russia Beyond the Headlines: The Ministry of Communications and Mass Media plans to increase exports of the Russian IT sector so that it rivals the defense industry. But how and when can this be done?

Mark Shmulevich: Software exports from Russia soared from $200–$300 million per year in the 2000s to $4 billion in 2012, according to various estimates. The sector has been growing an average of 20 percent annually over the past few years.

In 2012, Russia sold approximately $15 billion worth of arms to foreign buyers. If the trend continues, then we will soon be able to even closer to the defense industry, despite the expected growth in foreign arms supplies. A major increase in IT exports is not an end in itself; it is rather an indicator of how well the IT sector is developing and how well Russia is integrated into the global economy.

RBTH: During the last decade, Russian software giants such as Kaspersky Lab and ABBYY have accounted for the majority of this increase in export supplies. Is there any demand for the products of medium-sized companies or startups?

M.S.: Export is also growing thanks to outsourcing to Russia, and that’s what medium-sized companies do. When it comes to software products, we have had some successful projects, too. Take Ecwid, for example [a system that creates e-commerce platforms and has a strong working relationship with Facebook], or Prognoz [which produces analysis systems for companies] and Diasoft [which provides automation of banking and insurance systems].

There are many such examples, all of which offer internationally competitive products. Many of them were startups, but they have now found their niche. The only question is whether they are interested in staying in Russia or shifting their business to a neighboring country, Europe or the U.S., where the business environment is often more favorable.

RBTH: How can we encourage them to stay?

M.S.: There are two blocks of institutional arrangements that are critical to the development of the IT sector. These are the favorable tax regime and availability of skilled personnel. We have a preferential social tax – 14 percent instead of 30 percent – for companies where I.T. services and products account for 90 percent of business.

The discount is valid through 2017. But it’s not enough for them to keep developing at their current pace, and we are working on having the preferences extended until 2020. It is important that the state pursue a consistent policy on IT; some countries have a moratorium on sudden aggravations of the tax regime. To ensure sustainability, these companies need to understand that the rules of the game won’t change overnight.

RBTH: The reputation of Russian programmers in the global market is that they can deliver where Chinese, Indian and even American specialists have failed.

M.S.: They can learn from our ingenuity and resourcefulness. It is this competitive advantage that promotes the Russian outsourcing segment. Our graduates are excellent engineers, but there is a significant shortage of them. Currently, less than 1 percent of the Russian workforce is employed in the IT sector, compared with more than 4 percent in the U.S. and  3 percent in Europe.

The ministry has a considerable challenge to address, namely, how to make this profession more popular. We had a roundtable conference on the personnel problem in IT at the 10thKrasnoyarsk Economic Forum in Siberia not so long ago.

Representatives of the IT industry, from startups to Yandex and Microsoft, as well as large consumers of IT services like Sberbank, the World Bank and many more, were all in attendance. We are already putting in practice some of the provisions adopted at the conference. Once of these is placing an emphasis on programming competitions.

RBTH: There is an American video on YouTube showing the founders of Microsoft, Facebook, Twitter and Dropbox explain why it is important to learn programming. Will Russia have anything of this kind?

M.S.: We won’t directly copy the American idea, but such things are absolutely required in Russia. Videos are just one of the methods. Our task is to turn the IT specialist into the symbol of this generation. To this end, we should have TV shows about the sector, talk to school students about career prospects, have meetings with successful IT personalities and, possibly, shoot a TV series about programmers.

RBTH: When you were working on the development plan for the sector, were you building on the experience of those countries that have succeeded in IT?

M.S.: Unfortunately, you can’t just take someone else’s model and apply it to Russia without adjustment. We have some important peculiarities and pitfalls. But we are keeping an eye on developments in other countries. India liberalized its regulations on currency options, so we are looking at how this could apply to Russia. Options are not yet an effective motivation tool in Russia.

We are studying the special tax regimes (like the Patent box in the UK). We are also building on other countries’ experience in copyright protection. The fact that we are lagging behind gives us an advantage in, say, patent wars. When it comes to infrastructure, we are exchanging experience in the creation of technoparks with Singapore and Israel. We still have a lot to do to improve this sector in Russia.

Read more about Russia's IT sector in the Top 50 Russian start-ups section.