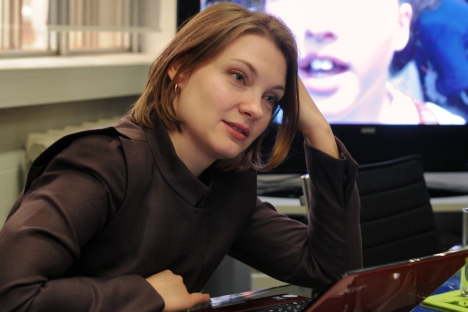 Tinkoff Digital CEO Anna Znamenskaya: "We see an enormous potential: mobile Internet users account for more than 50 percent of all Internet users, and this number is growing at an amazing pace." Source: Kommersant

Tinkoff Digital introduces MADNET — Russia’s first Real-Time Bidding platform for mobile devices. Tinkoff Digital CEO Anna Znamenskaya estimates that the mobile advertising market will grow to at least $200 million by 2014, although experts are skeptical about the potential for such growth.

MADNET aggregates all mobile traffic from apps on iOS, Android, Windows Phone and websites. It is also actively developing its own advertising network. The major suppliers of mobile-advertising traffic will be international networks that work exclusively with mobile apps for smartphones. Tinkoff Digital experts say that MADNET thus gives its clients highly convertible smartphone traffic.

Znamenskaya believes that the main challenges in Russia are the fragmentation of mobile traffic purchases and limited advertising capacity. There are three types of platforms: large platforms, such as Yandex, Mail.ru, Avito.ru; smaller, premium websites that trade traffic via special sellers; and mobile traffic for smartphones, for which there is a huge market.

In 2013, the RTB market will amount to an estimated $100 million, but it will at least double in 2014, the Tinkoff Digital CEO notes. “We see an enormous potential: Mobile Internet users account for more than 50 percent of all Internet users, and this number is growing at an amazing pace,” says Znamenskaya.

According to the eMarketer research company, by 2015, the RTB market in Russia will have reached $720 million — 18 percent of the entire Internet advertising market of Russia, which is estimated at $4 billion.

The head of SUP Media advertising technologies, Dmitry Karmanov, says smartphone ads are attractive for at least two reasons: for one, advertisers have a better chance of getting through to an audience with a higher paying capacity; they also benefit from a broad variety of advertising methods, including regular banner impressions and multimedia ads that make use of Flash and JavaScript solutions.

Experts warn that Tinkoff Digital may run into some problems, however. “Our estimates of the mobile RTB market are markedly different from those provided by Tinkoff Digital: you can’t generate the declared amounts of money, given the quality and quantity of traffic available via the systems mentioned,” says Alexey Katkov, vice president and commercial director of Mail.ru Group.

“Their predicted growth rate — from 2 to 15 billion impressions in just six months — also raises questions, because we are talking about Russian traffic going to foreign resources, which physically can’t grow at such a rate,” Katkov says. Furthermore, Karmanov warns that there are also complications in monitoring unique users in ad networks (each network counts its unique users, although essentially it is the same device), browsers and apps.

Read more about Russia's IT sector in the TOP Russia Start-ups section.