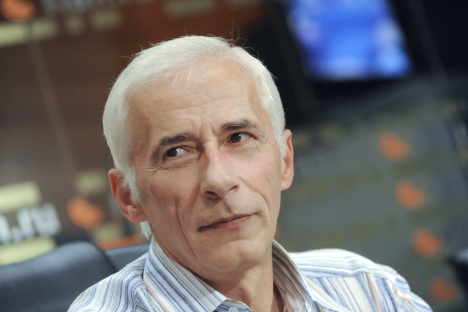 Deputy head of Russia's agriculture and veterinary sanitation inspectorate, Nikolai Vlasov warns against the possible dangers of imported food from the U.S., India and other countries that don't observe all sanitation measures.

Nikolai Vlasov, deputy head of Russia's agriculture and veterinary sanitation inspectorate (Rosselkhoznadzor) talks about the dangers of imported food, the possible import of buffalo meat from India, and the potential return of bird flu in Asia.

Russia Beyond The Headlines: How do harmful products end up on the Russian market?

Nikolai Vlasov: Unfortunately, we lack the basic elements of a normal food-safety system.

First, there is no mechanism to identify and trace raw stock and food products.

Second, there is no single oversight body. We have a unique situation — perhaps Germany also — whereby many independent veterinary services operate side-by-side. In Russia there are around a hundred, and the situation is completely uncontrollable.

Third, operators do not have to register. To register in the U.S. market, for example, you need to fill out a web form and list all the business owners. Every one of them has to be ticked to indicate that they have never been in breach of the veterinary legislation.

No tick and the company will not be registered. Say we work with a company called Vasilek LLC: it's impossible to find out who's behind it. Vasilek fouls up and gets shut down, but, in its place, comes Lyutik LLC, with exactly the same people.

RBTH: How are negotiations with the U.S. progressing over the resumption of meat imports without ractopamine?

N.V.: Pretty much dead in the water.

The Americans are really digging their feet in. At the same time, [they are] continuing to export products to the EU without ractopamine. That's what we want from them, too.

The biotechnology boom should not be used to the detriment of the consumer. Over in the States, dairy cows are treated with the growth hormone somatotropin. As a result, milk output has increased by 20 percent. But women who drink it develop male characteristics — they get a mustache.

RBTH: What about foreign suppliers? Which countries are the worst violators of Russian law?

N.V.: No country is either universally very good or very bad. Vietnam, for example, is good in respect of commercial fish, but bad when it comes to warm-blooded animals, making it impossible to import livestock from the country.

RBTH: Are any countries permanently on Rosselkhoznadzor's black list — India, for instance? Is it trying to improve?

N.V.: India could start supplying buffalo meat to Russia. It is a beef substitute. But it's not safe yet, since buffalo graze in garbage sites. But Indian business is maturing, and farms that monitor safety are appearing.

RBTH: What is the situation regarding the spread of African swine fever (ASF), which could impact Russian livestock?

N.V.: Still troubling. The most recent case of infection was last weekend, in the Tula region. There haven't been any serious problems so far, but the situation could be as severe as last year. We had to adopt a state program to combat ASF.

RBTH: Can we expect to see a cure for ASF?

N.V.: No panacea is likely, given the current technology. Medication can shift the disease from the acute phase to the chronic — i.e., [it can] make it worse. Animals can be vaccinated so as not to fall ill, but they will be ASF carriers, which is also unacceptable.

Theoretically, these measures exist, but they cannot be put into practice. We know that ASF immunity is scientifically possible, but we are not able to do it just yet.

RBTH: At least bird flu was brought under control...

N.V.: Unfortunately, that's not quite accurate.

We ourselves predicted that, by 2012, avian flu would be a thing of the past — and everything was moving in that direction. But, unfortunately, our colleagues from Southeast Asia contrived to fall asleep at the wheel, and now we are facing a new wave.

Whether this cup will pass from us this year, I cannot say. But there will be no repeat of 2005, because our poultry breeders are ready to repel the threat. There may be some unpleasantness, but I expect only isolated outbreaks.