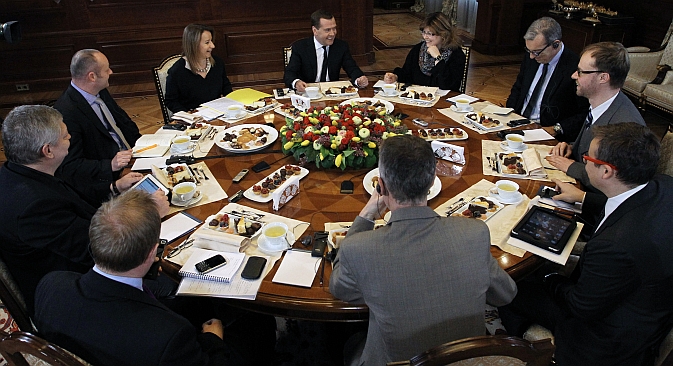 Russian Prime Minister Dmitry Medveded expressed readiness to assist Cyprus in resolving its banking impasse and at the same time called other European countries for closer collaboration in dealing with the crisis.

In an interview to leading European media at his residence, Prime Minister Dmitry Medveded expressed readiness to assist Cyprus in resolving its banking impasse and called other European countries for closer collaboration in dealing with the crisis.

Medvedev has confirmed that the Cypriot delegation has brought to Moscow talks proposals on the purchase of some assets.

"We do not refuse to discuss this issue [of providing additional assistance through Russian banks]. What can be the form of that? Today our partners have come and brought a number of proposals, including a number of material assets that, they think, Russia may consider to buy," Medvedev said.

Medvedev commented on a question whether Russia may provide additional assistance to Cyprus through its banks and what it awaits in return: It could be an offshore operation with natural gas.

It is the European Union that should make the first proposals, "and it is desirable that they correspond to the requirements of the civilized co-existence and recognized provisions of the international law," as well as domestic laws that guarantee the inviolability of property, according to Medvedev.

"We will then make our proposals. But we have not heard something absolutely new so far," he said.

While speaking about the natural gas operation mentioned in the question, Medvedev said: "This is a difficult question. First of all, I cannot understand the price, and secondly, we know that are problems with Turkey. This is a very difficult question for the discussion."

Russia is ready to listen to any proposal and understand arguments of Cypriot partners.

"We are ready to consider various options," Medvedev said, answering whether the issue of a naval base in Cyprus was taken into consideration.

It is Cyprus, then the EU and only then other countries that have their interests in Cyprus should solve the Cypriot problem, he added.

"Cyprus is a member of the European Union," Medvedev said. "And the European Union formulates its proposals. But, as I have already said, they should be formulated carefully, otherwise we may witness another stage of the international financial crisis."

In his opinion, the situation in Cyprus' banking system makes Russia think of revising the share of Euro in its gold and forex reserve.

"I would like to remain optimistic, but I must say that this is a reason to think," Medvedev said in an interview with a number of European and Russian media, when asked whether the situation in Cyprus is a reason to reduce the share of Euro in Russia's gold and forex reserve.

Earlier, Medvedev many times said that he believes in Euro and that Russia is not going to reduce the share of Euro in its gold and forex reserve.

"If this can be done in Cyprus, why cannot this be done in Spain, Italy and some other countries that have financial problems? They will start to seize deposits there too. This is a reason to think," he said.

Medvedev recalled that around 41-42 percent of Russia's gold and forex reserve are nominated in Euro.

No final agreements between Russian, Cypriot finance ministers in Moscow

"This is a lot of money. We, as any other country, need predictability, while the proposal that was made [to Cyprus to impose tax on bank deposits] is not just unpredictable, it proves some kind on inadequacy," he said, noting that he is going to tell this to his old friend European Commission President Jose Manuel Barroso who he will see on Thursday morning.

On the other hand, the Cyprus banking standoff may lead to the return of the Russian capital from offshores back to the country, Medvedev said.

"In general, this campaign may finally do good to us, because some money will return. I stress once again I do not speak about illegal capitals. Let them treat them themselves, find the beneficiaries. We are 'for' it," Medvedev said.

After all, Russia has raised the issues of de-offshorization many times.

"Of course, one should have a look at Cyprus and other places," Medvedev said. "There are a lot of special jurisdictions in the world. One should understand whether BVI [British Virgin Islands] are better than Cyprus or not, or Bahamas, or something else. There should not be double standards, otherwise we will have to make a decision to open a special offshore zone ourselves."

Russia has also expressed concerns about the fact that accounts of Russian state structures have been frozen in Cypriot banks.

"A lot of our public companies work through Cyprus," said Medvedev. "Their money is blocked for unknown reasons, because the source the money is apparent and the money has been shown everywhere. Those are state structures. That is why we have to take a rather harsh position on the situation in Cyprus and the settlement of the Cypress debt."

A large number of Russian public companies have accounts in Russian and foreign banks including in Cyprus, because its jurisdiction is conformable for various operations, he said, noting that the amount of so-called 'grey accounts' of Russians in Cyprus banks is exaggerated.

"I think that the volumes of deposits that what is called are of specific nature and prove 'grey' schemes of taking money from Russia are not that large as they are talked about," he said.

It would be very important for the Russian authorities that Cypress colleagues provide all information, "so that those who took money from our economy at least get an appropriate assessment on behalf of the state and take the responsibility, and probably the money would return," Medvedev said.