Russia to ban cash transactions over $10,000 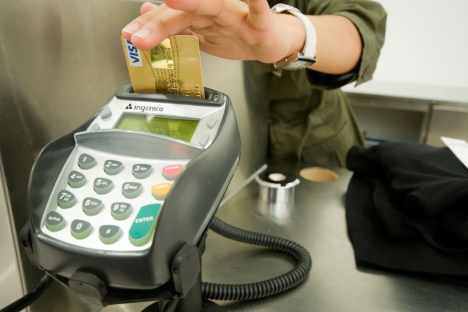 Cash-free payments will result in higher prices for some goods and services, according to experts. Source: PhotoXPress

The government plans to slash the amount of cash in domestic trade.

Russia may ban cash payments for purchases of more than 300,000 rubles (around $10,000) starting in 2015. The move is expected to boost banks’ cash reserves and put a damper on Russia’s shadow economy. However, the middle class will most likely end up having to pay the price for the scheme.

Moscow is looking to kill two birds with one stone: Firstly, it wants to bring some of the population’s “grey” income out of the shadow; secondly, it wants to increase the volume of cash reserves in the banks. The government’s bill will introduce the new rule to the State Duma. The document was prepared by the Ministry of Finance and approved by the government.

The restrictions on cash transactions will develop in two phases. In 2014, a ban on cash payments for purchases worth more than 600,000 rubles (about $19,500) will be introduced; the limit will then be halved to 300,000 rubles in 2015. Furthermore, the document introduces mandatory, cash-free, salary payments.

Smaller companies with fewer than 35 employees will be the only exception, and trade companies will be able to pay salaries in cash if they employ no more than 20 people on staff.

Plastic cards appeared in Russia back in 1969, in the form of Diners Club cards that were only accepted in special shops servicing foreigners and Soviet citizens who had returned from abroad with foreign currency. Following the collapse of the Soviet Union and the onset of market reforms, Russia attempted to create its first corporate card systems (STB-card and Union-card).

However, these were only used by the wealthiest Russians, and all of these systems were smothered by the 1998 meltdown. By that time, there was no point for the middle-class and lower-income households to acquire cards, because shops were unwilling to install terminals. Meanwhile, one of the capital’s retail giants — the French chain Auchan — only accepted its own cards for a long time, while refusing those of any other issuers.

Even now, cash withdrawals on payday account for around 85 percent of all ATM transactions. Moreover, in 2005–2011, cash flows more than quadrupled. According to Bank of Russia estimates, more than 90 percent of all commodity purchases in Russia are paid for in cash.

The government is now trying to bring the shadow economy into the light and increase money flows into the treasury, according to Investcafe analyst Yekaterina Kondrashova. In her words, as soon as the new rules come into effect, those using unofficial wage payment schemes will encounter certain difficulties, although there could be some ways to circumvent the law.

The Ministry of Internal Affairs and the National Anticorruption Committee estimate the market for money laundering and cash conversions at somewhere between 3.5 and 7 trillion rubles ($113–230 billion) — about 60 percent of the Russian federal budget.

Rosstat reports that the volume of the shadow economy (“grey” money from tax evasion, compensations paid as “cash in envelopes” and violations of currency and foreign trade regulations) is at least 15 percent of the GDP, according to Ricom-Trust senior analyst Vladislav Zhukovsky.

Given the substantial criminal activity and illegal entrepreneurship, the grey and black economies account for 50–65 percent of GDP. Even former Central Bank Chief Sergey Ignatyev had to admit that about $50 billion was taken out of Russia illegally in 2012 alone.

There is another side to the move toward plastic, however. Cash-free payments will result in higher prices for some goods and services. The middle class will suffer the most, because the “risk group” includes property and automobile transactions. The luxury segment will also be affected, including customized tours.

The problem is that Russian banks charge commissions ranging from 2–4 percent of the total amount of cash-free transfers. Sberbank charges up to 2 percent, says Irina Tyurina, spokesperson for the Russian Union of Travel Agencies.

Svetlana Kostromina at Volkswagen dealer AVILON is certain that the switch to cash-free payments will affect sales of passenger cars, because their servicing bank charges 1.8 percent for money transfers. There is a reason why only one or two of the 300 cars they sell every month are paid for by bank transfer.

Bank commissions on property transactions can be huge, so buyers of property in the pre-owned market will essentially have to pay twice the agent’s commission.

When it comes to travel agencies, Tyurina assumes that they will easily skirt the ban by breaking down the costs of customized tour into several deals — each one of them within the limit set by the Ministry of Finance.