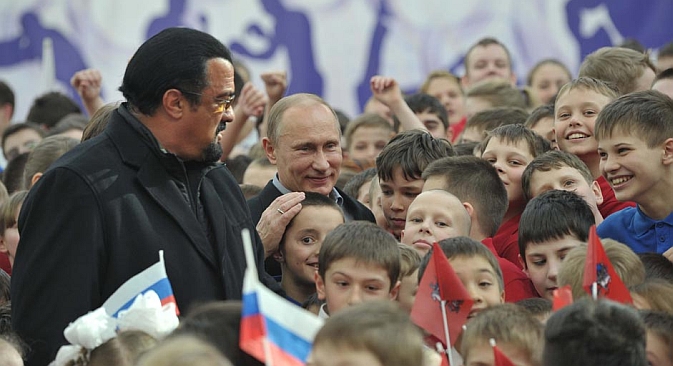 American movie star Steven Seagal could help ease restrictions on the sale of Russian firearms to the United States. This is the hope of Deputy Prime Minister Dmitry Rogozin, who has asked Seagal for his assistance.

As Rogozin pointed out, “everyone understands that such restrictions are absurd, because they hurt the interests of U.S. citizens who would like to buy Russian firearms for hunting and sports; and, on the other hand, it also hurts our manufacturers.”

Rogozin said he planned to discuss the issue with the Obama administration. The Russian official also said that he thought Seagal’s strong reputation in the American firearms community might provide extra “leverage,” in addition to high-level talks.

“In all films I and my compatriots have seen, you are always on the side of good against evil, you are always unequivocally for justice, for life, against terrorism, and against crime,” Rogozin was quoted by RIA Novosti as saying about Seagal.

He believes that, unlike many actors that just play strong characters in films, Seagal is a strong man in real life as well, because he has combat experience, a philosophy, and a civil stance.

“I would like to enlist your support in one important matter. I believe that your authority and connections within the American establishment could help resolve this issue,” Rogozin said, addressing Seagal. “You know that Russia’s production of firearms has always been good, competing with the best (including American) offerings. America’s firearms community is a very important and relevant force that influences society and government alike.”

Rogozin instructed the Russian Foreign Ministry to dissolve the intergovernmental agreement last year. The restraints were introduced to protect American manufacturers. Russian gun makers believe the restrictions are no longer necessary, because the market is big enough for everyone. The U.S. gun lobby begs to differ.

Reports of development of new types of firearms in Russia and abroad grabbed the headlines in 2012. The designers of the AK-12 assault rifle have managed to maintain the traditional ease of use and reliability characteristics of the Kalashnikov brand, while markedly improving its specifications by adapting it to modern combat conditions. Another advantage is that the new assault rifle can serve as a platform for around 20 future versions.

“Nobody is going to welcome us with our new models on the American market. The reason is competition: local players don’t want strangers on their market. This is a totally natural policy. The U.S. has a powerful gun lobby. Do we let anyone onto our own market? No. Neither do they,” CAWAT Director Igor Korotchenko told Vzglyad.

If the restrictions are lifted, Izhmash, Izhmekh, and VPZ Molot would be able to increase their export potential significantly, Izhmash spokesperson Pavel Kolegov said.

In recent years, Izhmash has been actively building up exports to the United States – the world’s largest firearms market. In 2012, exports rose 15 percent over 2011. However, compared to the total volume of 2012 orders, exports to the U.S. are still not that lucrative for Izhmash.

Izhmash accounts for 90 percent of the Russian market for automatic combat firearms and for 95 percent of the market for sniper rifles. Izhmekh manufactures handguns (including the Yarygin Grach, standard-issue model for Russia’s security and interior forces), as well as more than 100 types of hunting firearm. Molot produces grenade launchers and civilian firearms, such as smoothbore hunting and pump rifles and Vepr carbines.

Yet Izhmash has been changing its business model in response to shrinking government orders, reducing output of military products and expanding civilian production volumes.

This ratio became 50:50 in 2012. However, 2013 should see military production shrink to 30 percent against 70 percent for civilian products.

This year, Izhmash is planning to increase exports of civilian firearms to the United States by another 15 percent.

“The U.S. accounts for around 70 percent of the global market for civilian firearms. Accordingly, it is a priority market for us,” the company’s acting CEO, Alexander Kosov, explained last December.

In fact, Americans are now buying a few more firearms from Izhmash than the Russian army and police. The Russian company is profiting from softer gun laws in the U.S., where families tend to own five or six handguns and rifles, with some collectors possessing more than 20 units each.