Upscale hotels opening in Russia in 2013 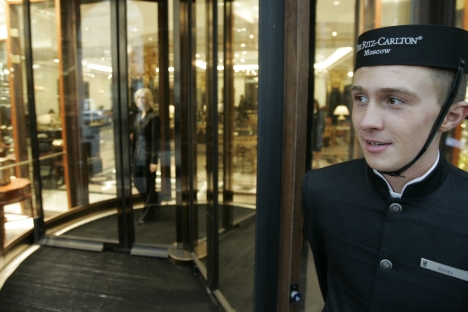 A bellboy stands at the entrance of the Ritz-Carlton hotel near Moscow's Red Square. Source: Reuters

Regardless of the ongoing global financial crisis, the Russian hotel market expects international chains to open up new, upscale hotels soon in Moscow and St. Petersburg.

The Russian hotel market expects international chains to open up new, upscale hotels soon. Several significant projects in Moscow and St. Petersburg were previously frozen because of the global financial crisis. Their openings are now expected this year and in the next couple of years.

Click to enlarge the infographics 'Hotels openings in Moscow'

“Excellent, but quite expensive as everything is in Moscow!” Oleksiy from Austria wrote about one of Moscow’s upscale hotels on the popular source booking.com. “Some personnel working there could be more friendly,” Simon from Switzerland wrote. Those were some of the average comments from foreigners on Russian hotels.

Still, Russian hospitality is making a lot of progress these days. Swissotel Krasnye Holmy (Moscow) and Radisson Royal (Moscow) even received the World Travel Award last year. Moreover, some famous hotel chains are scheduled to open new, upscale hotels in Russia, and it should help the situation with the quality of the country’s hotel market in general.

Huge business activity is being detected in the Sochi region, which is going to welcome the Winter Olympics in 2014. Seventeen hotels in different price segments, with a total of 322 rooms, were opened in 2012 in Krasnodar — the center of Sochi Region that lies 860 miles from Moscow. Furthermore, around 10 buildings (such as the Hilton Garden Inn Krasnodar and the Marriott) are still currently under construction. Their upcoming openings have not yet been set.

According to the Jones Lang LaSalle Hotels, the Moscow hotel market has grown by 60 percent since 2002, but it is still less saturated than in big cities in Europe, the Middle East and Africa. This statement is backed up by an official statistic that says there are only 7.5 hotel rooms per 1,000 citizens in Moscow. These figures are twice as small as in European cities – 19 rooms per 1,000 citizens in Rome, for instance.

With a total of 253 rooms, only two newly built hotels were opened in Moscow in 2012 — the four-star Mercure Arbat with a total of 109 rooms, and the three-star Azimut Moscow Tylskaya with 144 rooms. The number of new rooms is at its lowest for the last five years. These figures fell greatly in comparison with the 2011 volume. Both of these hotels are in the mid-price segment, so the mid-market share grew to 35 percent.

As the Moscow mid-market grows, the upscale segment is waiting for new projects; not a single room at this price segment appeared in 2012. St. Petersburg is in the same position. Some of the luxury projects are still currently under construction or in development — for instance, the five-star Four Seasons Hotel Lion Palace St. Petersburg. Its opening has been postponed many times.

According to Rosstat, the number of tourists who visited Russia in 2012 is about 5 million (42 percent of this figure consists of businessmen) — the highest amount in the last few years. The average daily rate (ADR) for three-star hotel fell by 17 percent to $153 at the end of 2012; ADR was about $300 for four-star hotels and $550 for five-star hotels.

“Speaking of Moscow and St. Petersburg, there is a tendency to decrease construction of new hotels. Projects are frozen because of the global economic crisis,” the vice president of GVA Sawyer consulting, Evelina Ishmetova, says. This does not really help the situation with the deficit of rooms.

Looking at the upscale market outlook, some international hotel chains have claimed that they will develop business in Russia in the next few years. Interest was shown by famous brands such as Lotte Group, InterContinental Hotels Group and Hilton Worldwide. The American hotel chain Morgans Hotel Group announced the opening of the first hotel in Russia under the Delano label.

This hotel, with a total of 160 rooms, will be inside the Moscow city business district; the opening is planned for 2015. Also, the Main Directorate for Industrial Construction in Moscow (abbreviated as “Glavmospromstroy” in Russian) is reconstructing the Central’naya (Central) hotel, which will be operated by international Mandarin Oriental Hotel Group. The opening of Central’naya is also expected in 2015.

"Business activity on the Moscow hotel market is quiet; about 20 projects with a total of 5,000 rooms are under construction there," says Usenko. In the last couple of years, the operators have placed their bets on mid-price hotels. "But there will be an increase in business activity in the upscale segment in the next few years," Ishmetova says.

New hotels would be very useful for the upcoming years. According tothe Federal State Statistics Service (Rosstat), the number of tourists in Russia will be at about 20 million by 2025, and business tourism is expected to rise rapidly. An important role will be played by significant events to be held in Russia — Winter Olympics 2014, FIFA World Cup 2018 and others. Even if there are not as many tourists as expected, there definitely will be a shortage of total rooms.