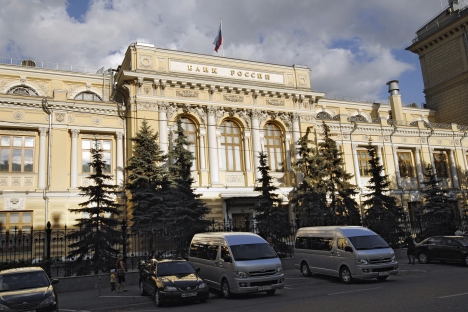 The Central Bank plans to introduce harsh sanctions against shareholders of credit institutions and requirements for high-risk players. Source: ITAR-TASS

Starting in 2014, the Central Bank will be able to introduce harsh sanctions against shareholders of credit institutions, set higher requirements for high-risk players and even control executive pay. Russian bankers have mixed opinions on the scheduled, supervisory changes.

The government has approved legislative amendments that will dramatically expand the Central Bank’s supervisory powers.

Additional strict controls will be introduced at three levels: shareholders, risks, and bank-employee compensation. While bankers are prepared to comply with the sanctions, privately they are calling the new measures unprecedentedly harsh. It is Elvira Nabiullina — who has been proposed as the next head of the Central Bank by President Putin — who will have to fend off their criticisms now.

It is proposed that they be removed from management positions for violating the procedures for disclosing bank ownership information, making deals with the bank that result in violation of regulations, or failing to act in situations where steps are needed to prevent bankruptcy.

Central Bank Deputy Chairman Mikhail Sukhov told Kommersant that a detailed procedure for the application of the sanctions would be spelled out in a Central Bank normative act.

“Obviously, this sanction is irrelevant for minority shareholders, and it will only apply to large bank owners,” said Sukhov.

If a bank violates the same regulations in deals with minority shareholders, the latter will not be affected — but the sanctions will still apply to the bank.

The strengthening of the risk supervision involves setting “individual minimum mandatory requirements” for certain banks. This punishment will be reserved for banks with inferior risk management practices and internal controls. The Central Bank will assess the bank’s control systems against the nature and size of its business.

It is a good thing these amendments are still at the draft stage, bankers joke despondently. Otherwise, Russian banks holding investments in Cyprus would have been looking for urgent additional liquidity. At the same time, the Central Bank pointed out that the tougher requirements are the result of a systemic assessment of banks’ own risks, rather than an instrument designed to respond to any current developments.

The Central Bank will also regulate bankers’ pay. The regulator will be able to “evaluate credit institutions’ compensation systems.”

The evaluation will encompass not only executive salaries, but also the compensation of risk managers, as well as “other employees” whose performance could have a critical impact on the bank. If the bank’s compensation system does not match the nature and scale of its business, the level of assumed risks and financial performance, the Central Bank will request the bank change it.

“The main purpose of the amendments is to bring the Russian legislation in line with the Basel Committee requirements: to enable the Central Bank to assess the performance of banks based on a review of their real economic activities rather than formally. “We hope that the bill will be passed in the spring session and come into force in 2014,” Deputy Finance Minister Alexei Moiseev told Kommersant.

Reactions from Russian bankers were mixed. “Individual assessment of bank risks is long overdue, because everybody shouldn’t be held responsible for the transgressions of a few,” Promsvyazbank President Artyom Konstandyan said. “Of course, implementing these requirements may be tricky; for them to become effective, the level of expertise in the Central Bank itself should be raised.”

“If the amendments are passed, the Central Bank will have a rather effective weapon that it could use against large bank owners who use the banks to finance their own businesses,” MDM Bank Board Chairman Oleg Vyugin said.

Other bankers were more pessimistic. The deputy chairperson of VTB24 Executive Board, Ekaterina Petelina, cautions that giving the Central Bank the right to set special requirements for specific banks could “violate the equal rights of banks in competition and pave the way for abuse.”

“The new Central Bank rules considerably increase risks for investors in the banking sector who won’t be able to accurately project their expenses,” the owner of a large retail bank said. “This is a negative sign that could substantially decrease investment in the banking sector. Also, existing banks will be forced to develop the way the Central Bank wants, rather than the way their owners would like them to.”

Experts believe that, given the upcoming reshuffle at the top of the Central Bank and the timing for the amendments’ coming into force, the changes to supervision practices are a reality rather than just theory. It will be Elvira Nabiullina — rather than the current Central Bank head Sergei Ignatyev — that will now have to convince bankers of the regulator’s impartiality.