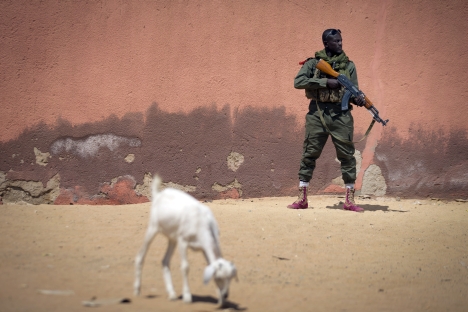 Russia accounted for 11 percent of the volume of major arms supplied to sub-Saharan Africa in December 201, according to a SIPRI report. Pictured: A Malian army soldier holding an AK-47 assault rifle. Source: AFP / East News

With Russian authorities strengthening military-technical cooperation with some African countries, experts stress that Russia has to go beyond arms sales in building mutually beneficial, strategic cooperation on the African continent.

As part of their foreign policy, Russian authorities have been strengthening military-technical cooperation with a number of African countries, including officer training and the sale of arms and military equipment. However, experts stress that Russia has to go beyond arms sales in building mutually beneficial, strategic cooperation on the African continent.

Scott Firsing, Ph.D.,who is a visiting Bradlow fellow at the South African Institute for International Affairs (SAIIA) and a Senior Lecturer in International Studies at Monash University in Johannesburg, told Business Africa that many African countries were purchasing equipment from Russia.

The Stockholm International Peace Research Institute (SIPRI) reported in December 2011 that Russia accounted for 11 percent of the volume of major arms supplied to sub-Saharan Africa.

For Russia, the arms sales business is a lucrative one. African buyers prefer weapons from Russia, due to their reliability and costs. Russia is the world's second largest arms exporter after the United States.

Like the U.S., this does not mean that Russia is ignoring development: Firsing further reported that Moscow wrote off debt of over $20 billion to several African countries in October of last year. Russia also allocated $43 million to the World Bank program during the last four years, mostly for education.

"In the past, the Soviet Union pursued this military policy against the Western domination in Africa. Russia has revived their contacts with their African comrades that used to be the traditional buyers of Soviet weaponry. It is a similar policy, in the sense that they are using military diplomacy once again in order to gain stature and influence in certain countries," Firsing told Business Africa.

"They think strategically. And they are taking the right approach by using their expertise — in everything from arms, to nuclear power, to satellite technology —in order to ensure mutually advantageous cooperation with strategic African partners. They are late into the game but have a historical advantage over others helping many African countries win independence.

And there are signs it is working. Alrosa has prospecting mining operations in Botswana and Zimbabwe. Lukoil is now drilling three wells in the Ivory Coast — one in Ghana and one in Sierra Leone. Better late than never, as they say," said Firsing.

"The right question is that it shows clearly Russia's weak business engagement with Africa on the other hand. There are so many investment areas; what is important these days is that Russia has to go beyond just selling arms to Africa! Still, Russia has the chance to transfer its technology to agriculture and industries in Africa," Shaabani told Business Africa in an interview.

State arms exporter Rosoboronexport accounts for around 80 percent of all Russian arms sales in a given year, and nearly 20 independent firms comprise the rest, with sales of spare parts and upgrades. Top weapons clients also include Soviet-era client and regional Asian heavyweight India, as well as Vietnam and other Southeast Asian nations wary of China's growing military might.

President Vladimir Putin stated that a major part of Russia's weapons business includes upgrades and refurbishment of Soviet-era technology and hardware. "We understand that competition in this sector of the international economy is very high and very serious," he said.

Russia's overseas arms sales exceeded $14 billion in 2012 and outperformed forecasts by more than $500 million,  according to the official, website transcript of Vladimir Putin’s speech at the Federal Security Council meeting on the defense industry, which was held in December 2012.

Russia wants to expand its scope and strengthen its position on the market for the maintenance and modernization of military equipment. Rosoboronexport's cooperation with traditional importers of Russian weapons from Africa include Algeria, Angola, Burkina Faso, Botswana, Ethiopia, Ghana, Libya, Morocco, Mozambique, Namibia, Sudan, South Africa and Uganda.

Additionally, Russia continues targeting some other African countries. An official told the Interfax news agency in mid-February that Russia could revive military-technological cooperation with Mali, if the situation in the country stabilizes; the official assertively added that the Libyan weapons market was not completely lost for Russia, as well.

Alexander Fomin, the head of Russia's Federal Military-Technical Cooperation Service who also led Russia's delegation to the Aero India show in the city of Bangalore, said that Russia had lost a number of clients for its weapons due to recent events in the Middle East and North Africa.

Significantly, Russia's overseas arms sales in 2012 have made it enough to maintain the country’s position as the world's second largest arms exporter after the United States. Russia plans "to enhance multifaceted interaction with African states on a bilateral and multilateral [level], with a focus on promoting mutually beneficial trade and economic cooperation" — the full text of the new foreign policy concept was approved by President Vladimir Putin on February 12, 2013.