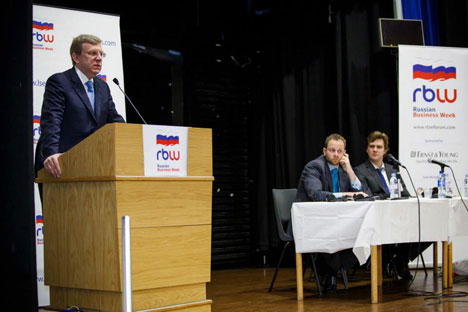 The 6th Annual Russian Business Week, held in London School of Economics in mid-March, addresses the myths about investing in Russia.

Is it worth starting a business in Russia? Isn't it risky? What are the most forward-looking markets? Where to start?

These are the questions often raised by many British businesses, especially now that Russia is listed as one of the world's most promising areas for investment. Answers to these and other questions were to be had at the 6th Annual Russian Business Week, held within the confines of London School of Economics.

Beginning in 2008 as a tiny student gathering, the event has grown into one of the most influential Russian business forums, whose past guests have included Foreign Minister Sergei Lavrov and Prince Michael of Kent.

"Over the past six years, we have had 100 speakers and more than 3000 visitors — students, young professionals, entrepreneurs, and media representatives," says RBW founder Philip Perkon.

"The main objectives of the forum have always been to provide first-hand and objective information from Russian businessmen, politicians, and officials, and to create an atmosphere where young people can listen to interesting speakers, ask questions, and learn more about Russia," he added.

This year's forum discussed everything from the Russian art market to business strategies. The event opened with a lecture by former Finance Minister Alexei Kudrin, who described the state of the Russian economy today.

He said that despite the fact that the Russian budget still depends on oil and gas for half its revenue, the sector can no longer deliver economic growth: "All the new fields coming on stream in Eastern Siberia are replacing the depleted reserves of Western Siberia, and the replacement rate is very high."

"The situation with gas is a little better, but here too the forecast is negative given the emergence of new technologies and diversification. This sector of the economy will provide zero or minimal GDP growth. For us to achieve growth rates of 5-6%, other sectors need to be developed — and quickly," Kudrin added.

Kudrin noted that given a stable exchange rate in the near term, the conditions are in place to correct Russia's dangerously high level of imports. But it requires investment in production, in which regard the country’s most advanced regions are leading the way:

"The Kaluga region and the large enterprises around St. Petersburg are on people’s lips, and Tatarstan has opened dozens of new industrial enterprises. What's needed are accessible investments and funds at affordable rates. [...] that way I think the investment climate can be improved with 2-3 years of productive work.”

Demand for investment is there. But why, in that case, are there only 600 British companies registered in Russia, against 4600 German firms, for example?

Judging by the questions from the floor that touched repeatedly on the sensational case of lawyer Sergei Magnitsky, British business is not hurrying to Russia for fear of corruption and the arbitrary rule of law.

Presidential Commissioner for Entrepreneurs' Rights Boris Titov admitted that the protection of business rights in Russia was a thorny issue, but asked that the situation not be dramatized.

"Such high-profile cases exist in many countries, but investors should look at the overall [investment] environment: how do the law-enforcement agencies and the prosecutor's office operate? Is the problem of raiding being tackled or not? Conclusions must not be drawn on the basis of scandalous politicized cases that do not reflect the actual state of affairs," remarked the ombudsman.

Titov's position echoes the opinion of VTB Bank's Neil McKinnon, who points out that corruption and double standards are not the exclusive preserve of Russia. McKinnon cites some recent criminal scandals in Britain itself:

"In the UK there is a problem with corporate governance and I think… and in the City where I work. There have been a number of world-publicized cases - The London Whale, JP Morgan […] A whole host of problems."

"HSBC and Standard Chartered have been fined 1.9 bln dollars for money laundering. If I was to money launder, I’m walking into a maximum imprisonment of 14 years and I’m not allowed to work in the City ever. If I’m on board of HSBC or Standard Chartered, I pay a 1.9 bln dollar fine, collect my bonus and I stay in my job. I think that is a disgrace. But I think that the City elite don’t get it," he added.

In addition to the stereotypes surrounding Russia, the mood of foreign investors is clouded by the lack of cheap sources of financing within the country. According to experts, growing companies in the Russian market find it hard to attract long-term funding, whereas Western financiers are willing to wait a little longer for their investments to bear fruit.

"Russia has money, but no capital," says Alexander Galitsky, renowned entrepreneur and owner of the venture fund Almaz Capital Partners.

Galitsky himself prefers to invest in technology companies. He reckons that the spotlight should be focused on successful Russian firms, such as Evernote, which was voted "Company of the Year 2011" by the influential journal Inc.

Overall, he believes that his country needs to position itself as an intellectual, not a production center, in which case the label "Designed in Russia" will guarantee a steady inflow of investments.