Who will pay to develop the Russian Far East? 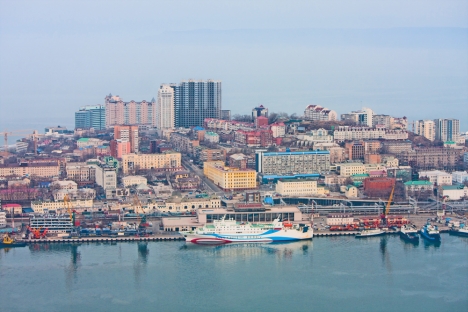 Although Russian authorities step up their efforts in developing the Far East region, a lot needs to be done. Source: Vitaly Raskalov

The Russian authorities have approved a development program for the country's Far East to improve the area’s economic infrastructure and the population’s standard of living.

The Russian government has approved a development program for the country's Far East region, in an attempt to improve the area’s economic infrastructure and the population’s standard of living. Authorities hope most of the financing will come from extra-budgetary funds and, particularly, from neighboring China.

Russia could use the country's National Welfare Fund to finance investment projects in the Far East, Prime Minister Dmitry Medvedev said that at a meeting of the State Commission for the Development of the Far East, Buryatia, Trans-Baikal Territory and Irkutsk Region in Yakutsk on April 2.

"I suggest the sources [of funding] include revenue from the management of the National Welfare Fund," he said  "Pension Fund assets could also be used as possible borrowed funds to carry out investment projects."

This meeting indicates that the authorities seek to find more funding to develp Russia's Far East. Russian ministers came together several times to address the problem of the Far East development.

For example, on March 21 Russian ministers met to examine a draft state program that includes two federal target programs: "Economic and Social Development of the Far East and the Baikal Region in the Period to 2018" and "Socio-Economic Development of the Kuril Islands (Sakhalin Oblast) in 2007-2015."

Despite opposition from Finance Minister Anton Siluanov, the ministers resolved, at the insistence of Prime Minister Medvedev, to approve the program "in general" — in other words, not completely. The sum in question totals 10 trillion rubles (roughly $321 billion), of which 3.8 trillion rubles ($122 billion) will come from the national budget.

"The figure is about 14 times higher than what we calculated to be possible within the parameters of the long-term budget," said Siluanov.

Minister for Eastern Development Viktor Ishayev had already noted that, in order to achieve the main goal of "accelerating the development of the Far East," the regional government plans to seek additional sources of funding.

"If direct (i.e., budget) funds are not available, the money will be raised externally," Ishayev said.

In this regard, he had in mind, first and foremost, China.

"The Chinese are very keen to participate in the implementation of our state program and in the processes of privatization," said Ishayev. "The idea was mooted by the chairman of the Standing Committee of the National People's Congress, Wu Bangguo. It is now up to our leaders to decide."

In his opinion, Chinese investors are already beginning to exert an active influence on the economy of Russia's Far East.

"Chinese companies control 40 percent of our bio-resources and almost half our raw timber stocks, and [they] are engaged in gold mining," he said.

According to the governor of Amur Oblast, Oleg Kozhemyako, who also attended the government meeting on March 21, Chinese investment in the Far East is practically the only means to develop the economy.

"We are interested in attracting investments from China with a long-term planning period and the establishment of joint ventures, which would allow us to create more jobs, increase the tax base, and generate mutual profit. It’s important for China to open up a bit more to Russian products — not only timber and other raw materials, but also highly processed products. For example, we would like to deliver wholesale supplies of milk to China."

At the meeting on March 21, Dmitry Medvedev stressed that budget investments must be made in transport, energy, and social infrastructure. It is particularly important to secure funds to extend the Baikal-Amur Mainline and the Trans-Siberian Railway, observed Minister of Economic Development Andrei Belousov.

"The historical mission of our country and its Far Eastern neighbors, China and Japan, is to revive and reinvent for the 21st century the idea of the Silk Road as a bridge between Western Europe and East Asia," said journalist and Asian studies expert Vsevolod Ovchinnikov. "To divert trade between Western Europe and East Asia from the Suez Canal to the shorter route via Russia's Far East, the Trans-Siberian Railway needs to be modernized."

The document contains a total of 11 industry-specific subprograms to improve the economy of the region and develop the minerals and raw materials complex, timber and fishing industries, agriculture, transport, and energy infrastructure, as well as to create a decent standard of living for the local population, protect the environment, develop tourism, and provide scientific and HR support for the state program.

According to Kozhemyako, Chinese experience could be drawn upon in realizing the program.

"We are interested in China's development of its northeastern provinces," he said. "I think some elements could be included in the state program to develop Russia's Far East and Baikal regions, since it provides a sound working model, tried and tested in practice.” He also underscored that neither the government of Amur Oblast nor its inhabitants had any fears about the so-called Chinese threat.

"The development of the Far East is a priority for this government," said Dmitry Medvedev. However, according to the 2012 budget and 2013-2014 planning period, for the implementation of priority projects to develop the industrial, transport, and energy infrastructure of the Far East and the Baikal region, Vnesheconombank is to receive only 15 billion rubles ($482.9 million).

This article is based on materials from Vedomosti, MK-Khabarovsk, ITAR-TASS.