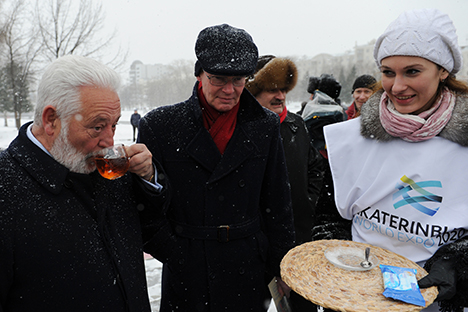 Bureau of International Exhibitions visits and Yekaterinburg praises its hospitality.

The Bureau of International Exhibitions visited the city of Yekaterinburg on March 26–29 to evaluate its chances of hosting World Expo 2020.

The commission noted Russia’s hospitality and its proactive youth, with the head of the delegation, Steen Christensen, reporting that Yekaterinburg stood a good chance of becoming the host of World Expo 2020.

“Right from the beginning, I felt the kind of hospitality the Russian people are famous for. The city is full of small and old beautiful buildings that remain there among skyscrapers,” Steen Christensen, head of the Bureau of International Exhibitions (BIE) Enquiry Mission in Yekaterinburg,was quoted by RIA Novosti as saying.

The bureau’s secretary general, Vicente Gonzalez Loscertales, spoke about the local youthon his third visit to Yekaterinburg.“You have many young people who are full of innovative ideas on how to improve your city even more,” he said.

In 2011, Yekaterinburg submitted an official bid to host World Expo 2020. The exhibition is scheduled for the period between May 1 and October 31, 2020, organized under the motto “The Global Mind: The Future of Globalization and Its Impact on Our World.”

The impression left on the BIE by their visit will largely determine whether Yekaterinburg will be able to host this major international event, whose importance is comparable to the Olympic Games.

The Bureau of International Exhibitions has repeatedly insisted on any city’s bid being unconditionally supported by the country’s leadership as a key condition.

Moscow attaches great importance to the country’s World Expo 2020 bid. Although Russia has always been an active participant in World Expos (beginning with the first one in London in 1851), it has never had the chance to host one.

The Russian Federation submitted a bid in 2001 for World Expo 2010, but lost to Shanghai.

This time around, Yekaterinburg is competing against Izmir (Turkey), Ayutthaya (Thailand), Dubai (UAE), and São Paulo (Brazil) for the right to host World Expo 2020.

Sverdlovsk Region Governor Yevgeny Kuivashev noted that Yekaterinburg’s key advantages over these other cities are its geographical location and climate. “We have a good infrastructure, and in my opinion, we represent Russia symbolically,” said Kuivashev.

Yekaterinburg is located in the central part of Eurasia. Foundedin the Central Urals in 1723 as a fort and a factory town, today the city is a major industrial center and an important transport and logistical hub on the Trans-Siberian Railroad.

Locals like to joke that Yekaterinburg is “the capital of Russia in case of emergency.”

Kuivashev believes the Expo will give strong impetus to the development of the city and the Sverdlovsk region as a whole, turning Yekaterinburg into Russia’s new financial and scientific center.

“We should make good use of the Expo legacy to attract financial and industrial companies to do business here,” the governor said.

The BIE Enquiry Mission reviewed a strategic plan for Yekaterinburg’s development, which includes the establishment of new business districts and a future site for World Expo 2020.

According to Yekaterinburg’s chief architect, Mikhail Vyatkin, the 1,383-acre property is “in an environmentally clean location” on the shore of the Verkh-Isetsky Pond, conveniently situated just under two miles from the city center and 13 miles from the airport.

“The Expo site is six kilometers[3.7 miles] from the boundary between Europe and Asia. We want to build a cableway for the exhibition’s guests to be able to visit this landmark,” said Vyatkin.

The Expo Park will cover an area of around 444 acres. The site will have 103 pavilions, including five large thematic pavilions, the Russia Pavilion and 20 large pavilions for major countries. Most of these structures will be temporary.

An Expo City for the exhibition’s participants and general commissioners, as well as an Expo Village for guests and media correspondents, will be built in close proximity to the Expo Park.

Thus, after the exhibition is over, Yekaterinburg could inherit a modern, one-square-mile,residential district complete with new restaurants and shopping centers.

According to Russian Deputy Prime Minister ArkadyDvorkovich, who is in charge of the World Expo 2020 organizing committee, spending on the preparations for the Yekaterinburg exhibition would reach around $2 billion.

The results of the BIE Enquiry Mission visits will be announced to all five candidate cities at a meeting of the Bureau’s General Assembly on June 10-11, with the winner to be announced at the end of November.