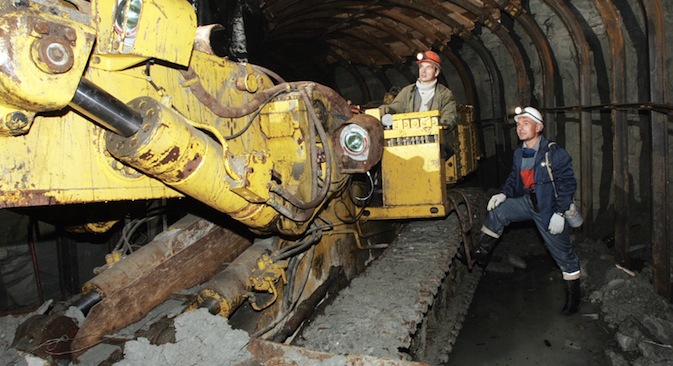 It remains to be seen whether foreign investors get easy access to Russia's mineral deposits. Pictured: Russian diamond giant ALROSA's underground mine in the city of Mirny, Republic of Sakha (Yakutia). Source: ALROSA

Russia is planning to give foreign investors easier access to deposits in remote regions of Siberia and the Russian Far East. According to experts, the best possible scenario for foreigners to invest in exploration is to set up a joint venture with Russian companies.

Moscow is increasingly interested in expanding its engagement with foreign investors in the exploration of its mineral deposits.

In February, talks on shelf exploration of the Russian northern seas were held with Asian investors. Furthermore, Russia’s Ministry of Natural Resources has announced plans to ease access to exploration projects for foreign investors.

Ministry of Natural Resources stocking up on reserves

Russian deposits are currently grouped into a number of categories. Large deposits have federal status. A list of these deposits was made in the summer of 2008 and included almost 1,000 surface sites, including 163 deposits containing hydrocarbons.

Federal status was also given to internal waters, territorial sea and Russia’s continental shelf, as well as the sites that are strategically important for defense and security.

In addition, they include deposits with at least 60 million tons of recoverable oil reserves, 75 billion cubic meters (2.6 trillion cubic feet) of natural gas reserves, 50 tons of vein gold and 500,000 tons of copper.

Only Russian companies with state stakes of more than 50 percent are entitled to explore deposits on the continental shelf of the Russian Federation.

In late February, the Ministry of Natural Resources announced that foreign investors would be given easier access to Russian deposits. Specifically, according to Natural Resources Minister Sergey Donskoy , there are plans to abolish “federal” status for the deposits in remote regions – especially in Eastern Siberia and the Far East.

The Ministry of Natural Resources has also submitted a proposal to automatically convert exploration permits into production licenses. Up until now, this had been impossible in the event that a strategic deposit was discovered during prospecting.

Analysts recommend that those wishing to take advantage of the new rules and explore Russian deposits study the unique features of Russian mining and develop a sound strategy for entering the market.

Denis Borisov, research director of the Oil & Gas Center at Ernst & Young Moscow, is certain that, if more liberal procedures are introduced, the competition for new Russian assets will be quite strong.

“As a result, even if current barriers are lifted, foreign companies are unlikely to be allowed to have 100 percent in oil projects; therefore, they will have to look for partners among Russian, vertically integrated, oil companies,” he told RBTH.

Applicable legislation does not allow areas and reserves within a single licensed site to be split. Russia keeps to the “one license – one licensor – one development plan” principle. Thus, the best scenario would be to set up a joint venture.

This option would not call for sophisticated legal procedures and would not cause regulators to ask additional questions, since precedents have been set.

For example, Borisov mentioned the Naryanmarneftegaz project between the privately owned Russian oil giant Lukoil and the U.S. company ConocoPhillips, in which the co-investors own 70 percent and 30 percent, respectively.

Another option for cooperation is the purchase of a shareholding in operating companies. However, according to Aforex analyst Narek Avakyan, the acquisition of an oil company in Russia is likely to entail lengthy procedures with Russian state regulators, as well as many moves to integrate the acquired assets into a group.

Avakyan cited the example of Renault-Nissan’s purchase of AVTOVAZ automotive giant – a process that started several years ago.

Analysts suggest that investors should not be put off by the high tax rates in Russia. Avakyan believes that Russia’s main advantage is its concessional tax rates and support from the country’s administration.

As far as new projects are concerned, the state will likely grant tax preferences for the resulting internal rate of return to reach 16.3 percent. According to Borisov, this means that investor worries about the drawbacks of the Russian tax system – especially the practice of taxing revenues rather than profits – are unfounded.