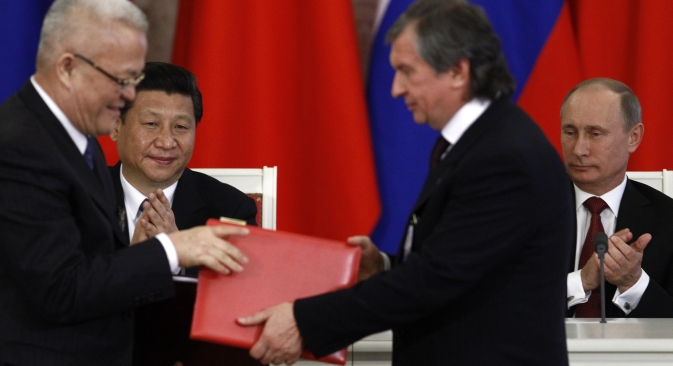 Under the terms of the new deal between Rosneft and CNPC, the upfront payment from the Chinese side could reach $8-10 billion. Source: Reuters

Russia will increase its oil exports to China and the Chinese buyer has agreed to pay upfront. This is the essence of a new agreement that was signed by Russia’s Rosneft and China’s CNPC in Moscow at the end of March. The upfront payment from the Chinese side could reach $8-10 billion.

Rosneft head Igor Sechin, who previously served as head of the Russian president’s secretariat, knows very well that the success of any meeting depends on preparation.

He was therefore personally involved in preparing the deal between Rosneft and CNPC; the important announcement itself was timed to coincide with the visit to Moscow by the Chinese leader, Xi Jinping.

Sechin traveled to China in mid-February to discuss the terms of the agreement to increase Russian oil exports with all the interested parties.

Under the terms of the current contract, which was signed in 2009, Rosneft is to export 300 million tons of crude to China by 2030.

In 2009, Rosneft also received $15 billion in loans from Chinese banks; Transneft was given a further $10 billion. Russian crude is being supplied to China via the Eastern Siberia-Pacific Ocean (ESPO) pipeline. The route originates at Tayshent (Irkutsk Region, Russia) and goes via Skovorodino station (Amur Region, Russia). From there, a spur of the pipeline takes 15 million tons of crude a year to Mohe County in China.

Under the terms of the new deal between Rosneft and CNPC, the Russian company will supply an additional amount of oil over a 25-year period, with the Chinese customer paying upfront, Rosneft has stated.

The ITAR-TASS news agency has reported (without naming its sources) that the size of the upfront payment to be received by Rosneft for its future exports to China could reach $8-10 billion. Andrei Polishchuk, an analyst with Raiffeisenbank, believes that $10 billion is actually the lower end of the estimate.

In addition, China Development Bank is to extend an additional $2-billion credit facility to Rosneft for the duration of the contract. “The terms of the loan are advantageous for us," Sechin has said for Rosneft.

Previously the Reuters news agency citied sources that said Rosneft hoped to gain access to an additional $30 billion in return for doubling its exports – which would have been a repeat of the 2009 deal. That has not happened; instead, the new agreement contains the upfront payment clause.

Judging from previous experience, such a clause is important for Russia. In 2011, the two sides failed to agree on the formula for calculating the price; Rosneft believes that, as a result, China paid less than it should have. In the end, the company gave the buyer a country discount of $1.5 per barrel.

When will the contract be signed?

According to Sechin, the actual contracts are to be signed in the very near future. Russian supplies to China via pipeline will eventually reach 31 million tons of crude annually. The Rosneft chief says, however, that the figure will be reached gradually, “in line with the growth in infrastructure capacity.”

This year China will receive an additional 800,000 tons, but, according to Russian Energy Minister Alexander Novak, exports could rise by as much as 7 million tons next year under a swap mechanism. Russia will supply its crude to the Pavlodar refinery in Kazakhstan, while KazMunaiGaz (the Kazakh national oil company) will supply an equivalent amount of oil to China via the Atasu-Alashankou route.

The agreement signed between Rosneft and CNPC does not specify the exact transportation routes, and the Kazakh swap option has many opponents in Russia.

Russia and Kazakhstan are both members of the Customs Union and the Single Economic Space. If Rosneft were to supply its oil to the Pavlodar refinery rather than directly to China, the company would not have to pay export duty to the Russian treasury.

On the other hand, the export duty is supposed to be refunded in the case of re-exports (and the swap mechanism is essentially a re-export operation). Transneft does not seem to believe that it will actually get that refund. The company's representatives have calculated that, if 7 million tons of oil were to be routed via Kazakhstan, the Russian treasury would lose about 80 billion rubles ($2.5 billion) a year in unpaid export duty.

As a result, the company would end up making an extra profit at the expense of the Russian treasury. Polishchuk says that, rather than paying $2.8 billion export duty for the 7 million tons of crude supplied to China, Rosneft would only pay an extra $100-120 million in corporation tax.

The analyst says, however, that such a situation will only arise if Kazakhstan fails to refund the export duty.

Rosneft also has at least two other arguments. The first is that the long-awaited oil supplies should revitalize the project to build the Tianjin oil refinery, which will cost $3 billion and have an annual capacity of 10 million tons. The joint venture to build the refinery was set up back in 2010. Rosneft has a 49-percent stake in the venture; the rest is owned by PetroChina.

The second argument is the agreement about the participation of CNPC in oil exploration at eight licensed blocks in Eastern Siberia, as well as offshore areas in the Barents and Pechora seas. Rosneft owns seven offshore blocks there; preliminary exploration has already commenced at two of them – the Yuzhno-Russky and the Medyysko-Varandeysky.

Rosneft in search of investors

There have already been several precedents of companies investing large amounts of money and later abandoning the projects because the oil reserves found at the new fields failed to live up to expectations. That is why potential partners need additional incentives, such as an increase in exports.

The terms of CNPC’s participation in Russian offshore exploration projects remain unclear. So far, however, the terms offered to all foreign partners have been more or less the same. The foreign companies are given a 33.3-percent stake in the joint ventures with Rosneft, and they finance all the exploration costs.

Russia has also invited India's ONGC Videsh Ltd. to partner in the exploration of the Magadan-2 and Magadan-3 fields, but the Indian side has yet to respond. The size of the potential investment by CNPC remains unclear.