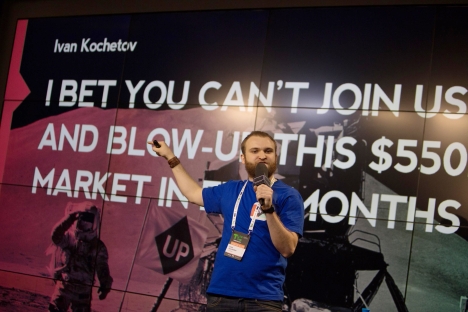 The Promise UP team plans to earn $1 million in just two years. Pictured: Ivan Kochetov, the founder of The Promise UP startup. Source: Promise Up

A Russian startup has come up with an app that will see to it that you are true to your word and fine you for broken promises. The project looks to earn $1 million in just two years.

Ivan Kochetov remembers a conversation he had with a female colleague after a hard day at work about a year ago. “It would be so much easier if everyone kept their promises,” the annoyed girl complained. “It would save so much time and nerves!”

Ivan’s busy mind started drawing pictures of people making and keeping their promises. Or rather, of those who go back on their promises. He eventually developed a simple application that monitored the number of promises you make, and how many of those you keep. The software was tested on friends – 26 people were given a reminder every half hour to mark the status of their promises for a week.

It turned out that the volunteer test subjects made an average of 40 promises to themselves and people around them per day, but kept only a third or less. That was a challenge worth tackling. Ivan and his friends proposed an easy solution – if you break a promise to a person, then you have to pay them. The model was tested in the office – the company introduced a $10 penalty for every broken promise.

“It was an exciting experience. It turned out that you can not only make promises, but also help people keep them,” Ivan says. “A colleague of ours was dating a girl, but was quite unhappy and couldn’t break up with her. We bet $100 that he wouldn’t be able to go ‘two weeks without sending her a text, instant message or e-mail,’ and he said ‘you’re on’.  He held out. He’s happy now and is going on with his life.”

Inspired by his early success, Ivan decided to go global with his campaign to fight broken promises and launched his own company. In March 2012, the business model and main concept for the app were ready. Quite soon, TDVFI venture capital fund became interested in the project and its manifesto. In May 2012, PromiseUP completed a $150,000 seed round. So far, the project's value is estimated at $600,000.

Foreign investors also started eyeing the project. “A general partner of an American venture capital fund told us: ‘I will have front row tickets to watch the Russians teach the world how to keep their word’,” Ivan smiles.

The PromiseUP team includes three developers. They work in association with the RZLTT Accelerator marketing agency, which promotes the products in the American and Russian markets.

When you register, you get UP$1000 (the app’s own currency) that you use to make a promise or hold other users to their promises.

You create a promise and accept it yourself as a bet or challenge a friend. Each promise has a term and a cost. When the time is up, the app will ask you “Did you keep your promise?” and if you did, the money is transferred from the loser (the one who offered you to bet) to the winner.

If you don’t keep the promise, then the amount is taken from your account, along with the loser fee of UP$1 paid to the project. If you consistently fail to keep your word, you will soon run out of money and you’ll have to buy new UP dollars.

What if a person breaks a promise, but tells the app he has kept it?

“We can’t change human nature. If a person wants to lie, he will lie. However, PromiseUP bets are normally made by people who know each other, so the lie will eventually be exposed,” Ivan says. “Our mission is to allow you to look at your close circle of friends and separate those people who hate lies and struggle with broken promises and those who lie and don’t do anything about it.”

PromiseUP plans to open and run UPshop, a store where people can buy merchandise for the UP dollars they accumulate for the promises they keep.

Do you keep your promises?