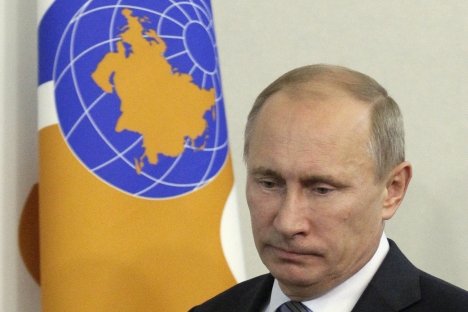 If the U.S. proves that the Customs Union’s regulations conflict with WTO rules, all three members of the Union will have to adjust to the WTO rules. Pictured: Then-Prime Minister Vladimir Putin during the Custom Union meeting. Source: AP

Since 2012, Russia has been operating under both the WTO and the Customs Union. The U.S. is now seeking official clarification on how the two regimes work with each other. Russian officials hold that there is no conflict, but experts claim the U.S. could take the matter to the WTO dispute resolution body.

An official U.S. notice with 29 questions addressed to Russia appeared in the WTO document base at the beginning of April. Most questions concern the Customs Union Agreement on the Application of Special Protective, Anti-Dumping and Compensation Measures to Third Countries. The common economic space shared between members of the Customs Union – Russia, Belarus, and Kazakhstan – came into existence at the beginning of 2012.

U.S. officials have not quite figured out the details of the Customs Union’s regulations. In their first question, they seek a clarification of how the Eurasian Economic Community (EAEC) and the Customs Union work together and what the difference is between the two. In fact, the Customs Union was discontinued more than a year ago, in February 2012, and all of its functions have been transferred to the EAEC.

The notice also seeks a clarification of the procedure for investigating and imposing protective duties. These are crucial issues for the United States, said Ilya Rachkov, a partner with King and Spalding. The EAEC is already conducting anti-dumping and special protection investigations that could affect U.S. companies – for example, with regard to imports of combine harvesters.

The United States has also asked for a definition of “material damage to an industry” and how it is determined. Under the agreement of the Customs Union, “an industry” means a company that, in aggregate, manufactures at least 25 percent of a given product’s output in the three counties. WTO rules provide a different definition – more than 50 percent.

“Please, explain how manufacturers accounting for just 25 percent of output can be considered a majority,” American officials wrote.

“The WTO agreements don’t specify the concept of a ‘significant share.’ WTO dispute resolution practices confirm the lack of a direct quantitative definition. For instance, in a dispute involving Argentina’s use of anti-dumping measures against Brazilian poultry, the arbiters said directly that a ‘significant share’ doesn’t mean a ‘majority.’ We believe that the definition contained in the Agreement on Application of Special Protective, Anti-Dumping and Compensation Measures to Third Countries does not conflict with the WTO Agreements,” the EAEC’s Domestic Market Protection Department told RBTH.

The department also stated that those issues were not tantamount to disputes over the interpretation of WTO agreements or over the compliance of specific measures to WTO obligations – on the contrary, they help avoid disputes. This is why raising questions cannot be viewed as a ‘claim.’

“This is a normal working process,” an official close to the EAEC said.

WTO member countries constantly exchange questions and clarifications. Russia must present its answers in time for the meetings of the WTO Special Protective, Anti-Dumping and Compensation Measures Committees that will take place in Geneva at the end of April.

Russia lives under two regimes – the Customs Union and the WTO, some of whose rules are different or contradict each other, Rachkov said. For example, unlike the WTO rules, the agreement between Russia, Belarus and Kazakhstan does not stipulate requirements that proof of damage inflicted upon an industry be presented.

After obtaining the clarifications, the United States could claim that the Customs Union’s regulations contradict the WTO rules and demand a remedy of the violations, Rachkov said.

If Russia disagrees, the complaint could be elevated to the WTO dispute resolution body. According to Professor Alexey Portansky of the Higher School of Economics in Moscow, if the United States proves that the Customs Union’s regulations conflict with WTO rules, all three countries will have to adjust to the WTO rules.

This article is a combined report based on materials from the Vedomosti newspaper.