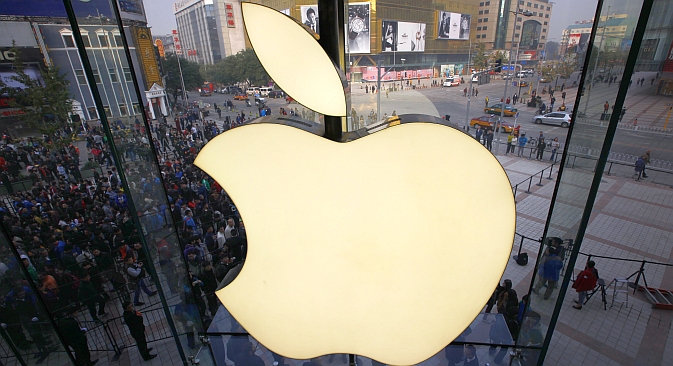 Go into any Apple store and you’ll discover a lot of Russian technology. Source: Reuters

It was once unthinkable Kendrick White would be where he is. Nizhny Novgorod, Russia’s fifth-largest city located 250 miles east of Moscow, was strictly off limits to foreigners during the Cold War as one of the Soviet Union’s centers of secret scientific study. It was a virtual prison for famous Soviet scientists like Andrei Sakharov, the Nobel Prize-winning father of the Russian atom bomb.

Now, where Sakharov once toiled to build Russia into a nuclear powerhouse, the American White is planting seeds he hopes will one day grow into Russian versions of Apple, Google or Facebook. Moscow officials aim to transform lands once known for hosting the Gulag Archipelago into a network of Russian Silicon Valleys. The plan involves coaxing investors with an array of incentives, from tax breaks to cheap office space.

Mr. White is CEO of Marchmont Capital Partners, which he set up in his native Florida eight years ago  after stints at the European Bank for Reconstruction and Development, PwC and as a privatization advisor in Nizhny Novgorod. After the Iron Curtain fell in the early 1990s, he moved to Russia, sensing opportunity. He has spent 20 years promoting entrepreneurship, horizontal integration and start-up financing for high-tech businesses in Russia’s regions.

“As an entrepreneur, I’ve been interested in science and technology commercialization my entire life,” White says. “Mathematics, which is the basic language of science, is in Russians’ genetic code — this is the logical place for me to be.”

Following World War II, the Soviet government provided generous funding for national security-related research and closed cities (not unlike Los Alamos) flourished across the country. But while the U.S. had a matching wave of entrepreneurs ready to found start-ups and commercialize the offspring of state-funded research over the past two decades, Russia faltered at first. Following the end of the Cold War, many of the closed cities opened up and funding was slashed, but nobody filled the gap between science and the free market.

“Probably about half of them are ineffective, because federal and local officials sometimes approach their initial development as huge real estate projects without establishing the critical relationships between scientists, entrepreneurs, angel investors and venture funds.”

The sprawling IDEA technopark in Kazan (500 miles east of Moscow on the Volga River) was set up on the grounds of an abandoned defense plant in 2004, with the aim of creating high-tech businesses. By providing two key services to local start-ups — cheap rent and sound business advice — the technopark graduated enough firms within three years to become self-sustaining; and by 2007, its companies were paying enough taxes into the local budget to repay the start-up capital.

“For the last several years, we’ve been independent of the regional budget, and this is important,”  says Sergei Yushko, IDEA’s general director. “Our experience proves technoparks are a viable model for economic development in Russia.”

Yushko explains that most of the companies at IDEA provide engineering services, software or web design. One such company, Smarthead, has scored top-notch clients as diverse as Honda and L’Oreal.

After three years, graduates of IDEA have the option of leaving the technopark, usually securing bank loans independently to acquire office space, or moving into its business park, where rent is no longer subsidized.

There, neighbors will include the local R&D branches of international behemoths such as GE and Siemens. “The foreign companies come first and foremost for the qualified personnel,” Yushko says.

“I’m a believer in the unpopular notion that we don’t need factories in Russia,” Yushko says. “Production will eventually be moved to where you have cheap labor, like China. Our advantage is people and their ideas.”

Root of the issue

White believes that the government’s investment of billions of dollars into Special Economic Zones and technoparks is now paying off. “They’re starting to get to the root of the issue — how to get the flow of new companies into them and successfully commercialize science.”

“This will be the exciting phase over the next five years, because the officials in Moscow at Skolkovo, the Russian Venture Company and similar organizations now understand this.

“Games and programming outsourcing have been the first signs of Russia’s emerging high-tech sector because you don’t need a lot of resources to make them, but I’m a lot more excited about projects in microelectronics, medical sciences, nanotechnology, chemistry, space and quantum mechanics that will gain global recognition in the coming years,” White adds.

VIDEO: Technopark Skolkovo to give boost to Russian startups

“If you go into any Apple store in the United States, you’ll discover that a surprisingly large number of their top 100 products come from Russia,” says Pekka Viljakainen, an advisor to Moscow’s Skolkovo Foundation. “But most of them have offices in California and hide their Russian origins.

“Our EBRD Central Russia Venture Fund invested into the [St. Petersburg-based] Speech Technology Center, which is developing top-notch voice-recognition software, and Morion, Inc., which has produced quartz oscillators for projects as diverse as GPS and NASA’s Mars Odyssey mission. We successfully exited these high tech projects, setting into motion a new generation of success stories. This will only grow as a new generation of globally known brands emerges from this country.”

For his part, Mr. White also singles out Kuzbass Technopark, in Siberia’s coal-mining region Kemerovo, for developing coal-based sorbents to absorb oil spills, and the pharmaceutical cluster in Obninsk (“home of the peaceful atom”), where cutting-edge medical solutions are created.

In the U.S., the Baye-Dole Act of 1980 played the “critical role of transferring patent rights from the government to universities and small businesses,” White says. “A Russian equivalent is under revision in the country’s parliament. This will be critical to support Russian innovators in advancing their ideas into the real marketplace.

“What Russia’s leaders are beginning to realize is that it all has to be part of a comprehensive ecosystem,” he says. “In addition to building up the technoparks’ infrastructure, you need to link them with scientists in nearby universities and provide management training programs there.

“You need a proof-of-concept center, like Von Liebig at the University of San Diego, to test the commercial viability of scientific concepts. Then you need an accelerator program that can contribute real money to developing a prototype, on the premises of a technopark, and paying lawyers to do patent protection.

“Soviet tradition has most Russian scientists and entrepreneurs looking to budget-holders in Moscow for money, while what needs to happen is local horizontal integration between all these forces,” White says. “This is what we’re doing at the Lobachevsky University here in Nizhny Novgorod, and it’s what I see already happening all across the country.”