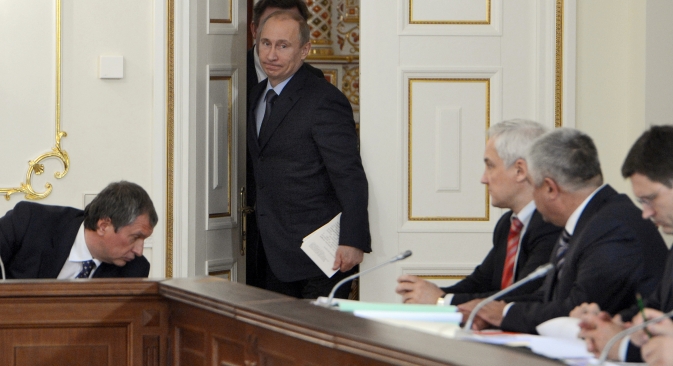 The Ministry of Economic Development is planning to sell another 19 percent of Rosneft to meet the privatization target, as the sale of other assets may fail to bring the desired results. Government officials doubt the Rosneft shares will be sold this year. Meanwhile, investors are already interested in other huge, state-owned assets.

Otherwise, the fate of the ambitious privatization plan – by which the government hopes to raise 427 billion rubles ($13.5 billion) – might hang in the balance.

The government controls Rosneft through the state-owned company Rosneftegaz – a holding that, until recently, owned 75.16 percent of the oil company’s shares.

In late March, BP acquired 5.66 percent from Rosneftegaz for $4.8 billion, bringing its stake up to 69.5 percent.

Belousov proposes selling another 19 percent. “We are talking about an additional block of shares. The decision will have to take into account the law On the Subsoil,” the minister said.

“That means another 19 percent. Such an option exists.”

Under the On the Subsoil law, only companies that are more than 50-percent state-owned are allowed to work on the Russian continental shelf. If the Ministry for Economic Development’s idea is approved, the government share in Rosneft will drop to 50.5 percent.

Belousov noted that Rosneft was technically ready for privatization and consultants were already working on this.

A spokesperson for Rosneft president Igor Sechin, who has spoken against the state company’s privatization more than once, failed to comment.

Members of the government staff, however, doubt that Rosneft shares could be sold this year. Even having enlisted the president’s support, the deal would need to be prepared; meanwhile, the markets now are not very good and competition for capital is stiff, they say. Also slated for privatization this year are 10–25 percent of VTB and 7–14 percent of ALROSA.

The 2013 federal budget puts privatization proceeds at 420 billion rubles ($13.3 billion) but, a month ago, Rosimushchestvo (The Federal Agency for State Property Management) notified the Finance Ministry that, in reality, sale of property would bring in only 60 billion rubles ($1.9 billion). Thus, the Ministry for Economic Development is also proposing to privatize Aeroflot, the United Grain Company, Rostelecom and Sheremetyevo Airport in 2013.

As it turns out, not all government-owned assets interest investors. The communications agency EmCo carried out a survey commissioned by a federal agency of 37 analysts from 18 major investment companies. According to the EmCo report, the purpose of its survey was to measure the investment community’s perception of the state companies that the government is contemplating fully or partially privatizing in 2013-2014.

The survey shows that institutional investors are most interested in Sberbank (100 percent of respondents), Transneft (92 percent), ALROSA and Aeroflot (75 percent each). Interest in acquiring part of the government stakes in Russian Railways and Zarubezhneft appears to be moderate. The assets of Sovkomflot are the least sought after; respondents feel that it is the least attractive state company for investment purposes. Rosneft was not on the list of companies.

Yan Tavrovsky, head of JP Morgan in Russia and the CIS, says it is premature to forecast fulfillment of the government’s privatization plans this year. “It depends on the state of the market and on how important it is for the state to sell a given asset at a certain price,” he says.

Tavrovsky believes ALROSA has the potential to become another so-called blue chip: “As the world’s leading diamond producer, the company has a unique resource base and its story should certainly attract investors.”

This article is based on materials from Kommersantand Vedomosti.