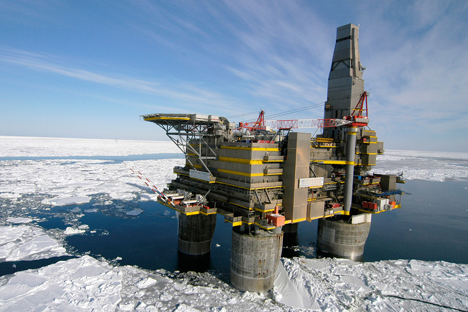 Russia's giant gas firm Gazprom has signed a memorandum with Shell on the joint development of Russia's Arctic shelf. According to the agreement, Shell will receive a 33.3 percent stake in this project.

Gazprom is stepping up its fight with oil major Rosneft over offshore energy deposits on Russia's Arctic shelf. The Russian gas major has signed a contract with Shell that will give the Anglo-Dutch firm a 33.3 percent stake in the Russian project and assume the bulk of its geological exploration cost.

During President Vladimir Putin’s visit to The Netherlands on April 7, Gazprom CEO Alexey Miller and Royal Dutch Shell Chairman Jorma Ollila signed a memorandum on the joint development of Russia’s Arctic offshore deposits and deep-water shelf overseas. According to the Ministry of Natural Resources, the companies intend to develop the North Vrangel section of the Chukotka Sea and the northwestern section of the Pechora Sea. Gazprom has yet to secure licenses for those areas, but they are expected to be issued by the Federal Subsoil Resources Management Agency before May 1.

Subject to signing a final agreement, Gazprom will obtain a similar stake and assume similar obligations in its partner’s offshore projects. Interfax reported that these could include Shell’s projects in South Africa.

Last year, Shell obtained geological exploration rights to the Orange Basin off the South African Republic’s shore. The area is approximately 14,285 square miles and has a depth of 310–2,174 miles.

It is located at the border with Namibia, at a distance of 93–217 miles from the coast. Shell’s license is valid for three years.

In Russia, Gazprom and Shell had already been partners on the Sakhalin-2 project that includes the country’s only liquefied natural gas (LNG) plant, which has a capacity of 10 million tons annually. Expansion of the plant has long been on the agenda, but the lack of a resource base has been an obstacle.

Pavel Oderov, head of Gazprom’s International Business Department, said in early April that the matter was being studied and the results would be announced closer to summer.

Shell was also considered as a potential partner for Gazprom and Total in the development of the Shtokman field. When the Shtokman Development AG shareholders’ agreement expired in the summer of 2012 and Statoil withdrew from the project, it was Shell that was supposed to replace it.

This has yet to happen, and the project has been postponed indefinitely due to a lack of market potential and the absence of a finalized development arrangement – although Shell has always maintained it was interested in expanding cooperation with Gazprom.

Both companies signed a global cooperation protocol back in 2010. Shell is also a partner of Gazprom Neft. Shell and Gazprom Neft signed a memorandum on April 8, reiterating their general agreement.

The companies will hold equal stakes in a joint venture in charge of this project, which will be operated by Salym Petroleum Development. Shell CEO Peter Voser told Kommersant in mid-2011 that his company was focusing on natural gas projects and was planning to produce more gas than oil.

Shell confirmed its loyalty to Gazprom by foregoing an alliance with Rosneft, which was seeking a replacement for BP after their global cooperation agreement broke down in 2011. Rosneft eventually formed an alliance with American company ExxonMobil.

Among other things, the new partner will now essentially have to help Gazprom fend off the natural gas ambitions of Rosneft, which declared them loud and clear after Igor Sechin came to the helm of the state-owned company in May 2012.

The rivalry between Gazprom and Rosneft did not seem so heated back then, when both state-owned companies joined forces to defeat attempts by private investors to secure access to Russia’s offshore deposits – and were successful, as it became clear in the beginning of this year. The situation has since changed, however.

In February 2013, Rosneft’s Igor Sechin openly advocated a repeal of Gazprom’s export monopoly on LNG (Kommersant, Feb. 14) and opened discussions with ExxonMobil on building plants in Alaska and Sakhalin, in order to target the Asia-Pacific market that Gazprom finds so important.

Moreover, construction of an LNG plant as part of the Sakhalin-1 project (Exxon – 30 percent, Rosneft – 20 percent) could complicate the expansion of the Sakhalin-2 (whose stakeholder, Shell, has been insisting on increasing its output), because natural gas from the Sakhalin-1 was supposed to serve as a resource base for the latter’s liquefying capacity expansion.

Rosneft is now planning to liquefy gas by itself.

However, the officials have since taken a less committed stand, with Natural Resources Minister Sergei Donskoi calling on both state-owned companies to settle the matter on their own.