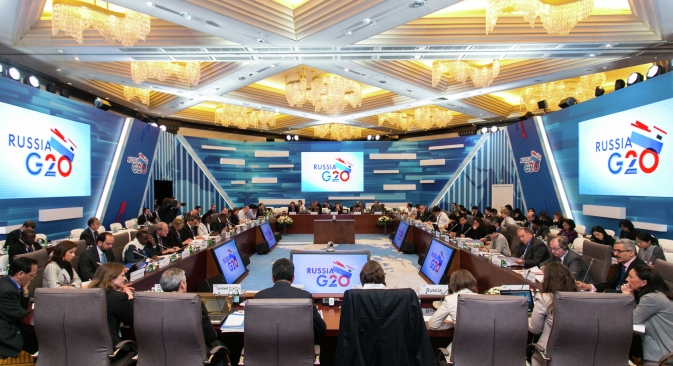 Participants of a press briefing within the framework of the Conference on the Russian Presidency in G20 "Fostering Economic Growth and Sustainability" held on Feb. 28. Source: G20 / Press Service

The G20 summit between finance ministers and central bank governors, that started on April 18 in Washington, D.C., addresses global economic challenges, and at the same time gives Russia a chance to promote its national interests. Yet experts are divided in the forecasts on whether or not the meeting will yield any results.

The meeting of G20 finance ministers and central bank governors, which began on April 18 in Washington, D.C., raises perennially unresolved problems of the global economy, while simultaneously presenting Russia with a real opportunity to promote its own interests. Meanwhile, experts are split on whether or not the meeting will yield any results.

Russia is chairing the April 18-19 meeting of G20 finance ministers and central bank governors inWashington, D.C., as part of the spring session of the International Monetary Fund (IMF) and the Word Bank Group. The main purpose of the negotiations is to make preliminary decisions on a wide range of issues, with subsequent discussion and approval to be had at the level of G20 heads of state.

At the same time, Russia is planning to propose that measures be included to create a mechanism for the automatic prevention of financial crises (such as the one that recently hit Cyprus) in the G20 communiqué. “I believe that we could reach a consensus on this,” Russian Finance Minister Anton Siluanov had said previously when remarking on the Russian delegation’s plans for the Washington talks.

At a similar meeting in Moscow in February 2013, the participants had to admit that, despite the targets set at the 2010 Toronto G20 Summit to cut debts and budget deficits, some countries had failed to achieve those objectives. The slow pace of economic recovery and greater-than-expected sensitivity of economic growth to budget-spending cuts were cited as the main reasons behind this disappointing performance.

Finance Minister Siluanov added that the deadline for the governments to comply with these obligations could be pushed back to 2016; as a matter of fact, the Toronto targets will need to be revised, even though the G20 is still committed to them. According to Siluanov, following the Moscow talks, Russia had expected the G20 to make progress by April on achieving a balanced approach to setting new targets for budget deficits and public debt levels.

However, the search for specific measures that would help resolve the problem of global economic imbalances continued right up to the Washington talks. Both economic experts and G20 finance ministers have a hard time identifying a specific recipe for stabilizing the global economy.

For example, Mikhail Khazin, an economist and NEOCON consulting head, is pessimistic about the meeting in Washington, predicting that it will yield few results ­ – just like the Moscow meeting before it.

“The only real way to eliminate the global imbalance is to cut public spending by 20-25 percent, and, in the case of Europe and America, by as much as 50 percent – which will lead to a social catastrophe. That’s why nobody will agree to this,” Khazin told RBTH.

The economist compared the global economic situation to a car teetering on the edge of a cliff and about to tip over. “But [the G20 finance ministers] keep arguing about whether to turn left or right. What difference does it make? The car will only go down from there,” said Khazin.

Leonid Gusev, an expert with the Institute of International Studies, was more upbeat, insisting that Russia’s main task is to actually promote its own interests rather than merely pay lip service to them.

“Our economy is heavily dependent on oil prices. These have dropped considerably over the past few days, which is, of course, a negative signal to the global economy – but also to us in particular,” Gusev said. “That’s why the development of the oil and gas market will certainly figure prominently on the meeting’s agenda. The issue of balancing G20 budgets is still relevant amid a continuing economic crisis that nobody exactly knows what to do about.”