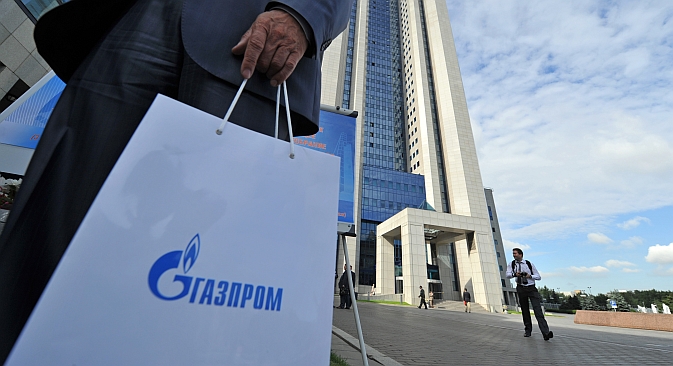 Gazprom’s stock has dropped 30 percent over the past year. It is possible that Gazprom’s shares have already reached the lowest point at which analysts normally recommend buying up to forestall a rebound.

Gazprom’s stock has dropped nearly 30 percent in value over the past year, to a low that was last registered in the summer of 2009. This downfall may continue for some time, but analysts recommend buying up the gas giant’s shares, whose target price is about double the current market price.

Russia is proof that even strong lobbying leverage and significant government backing cannot help a business circumvent the natural law of market competition.

Two Russian, state-controlled, energy giants – Gazprom and Rosneft – have found themselves fighting it out over hydrocarbon fields on the Arctic shelf.

Not so long ago, the two companies were working in concert to drive private producers away from this market.

Now the former allies are laying claim to the same plots. The standoff will be arbitrated by the government fuel and energy commission soon.

The conflict stems from natural gas producer Gazprom’s intention to pass development rights for several Arctic fields on to its oil arm, Gazprom Neft – a direct competitor of Rosneft.

In January, the government approved the issuance of licenses for 17 shelf plots and 12 shelf plots to Gazprom and Rosneft, respectively.

Rosneft has already started work on its plots; seven of them are being developed jointly with its U.S. partner, ExxonMobil.

According to the Russian business daily Kommersant, Rosneft has recently asked the Ministry of Natural Resources to give it the plots in the Kara and Barents seas, which had previously been promised to Gazprom.

The initial understanding was that any foreign business wishing to develop the Russian Arctic shelf was to have either Gazprom or Rosneft as its Russian partner, says Konstantin Simonov, director of Russia’s National Energy Security Fund.

However, that principle is now ignored more often than not.

“[Italian energy group] Eni and [Norwegian oil giant] Statoil are historically Gazprom’s partners; although not giving up on their existing contracts with the world’s largest gas producer, these companies are now signing new agreements with Rosneft,” Simonov says.

“The only company I am aware of that still keeps loyalty to Gazprom is [Germany’s largest hydrocarbons producer] Wintershall.”

While certainly a factor in the latest depreciation of Gazprom’s shares, the conflict with Rosneft was not its primary cause.

Anna Lakeychuk, an analyst with the Russian investment group ATON, believes there are three main reasons: the dragged-out talks to sell 38 billion cubic meters (1.3 trillion cubic feet) of natural gas annually to China; the strengthening domestic competition, most notably from the independent producer NOVATEK; and the European economic crisis.

NOVATEK has already managed to woo away several of Gazprom’s major industrial customers. The company is actively developing the Yamal LNG (liquefied natural gas) project, which was originally proposed by Gazprom.

Meanwhile, the European economic crisis is forcing Gazprom to address the problem of overproduction, while the company has been failing to ensure a growth of domestic natural gas prices. End users owed Gazprom 143 billion rubles ($4.6 billion) as of January 1, 2013 – or 47 percent more than the year before.

“Taking into account the ‘social component’ of Gazprom’s operations [the company has been expressly forbidden by the Russian government to hike household gas prices above a certain level], its financial standing largely depends on gas consumption levels in Europe, which have been suffering from the continuing economic crisis,” says Grigory Birg, co-director of the Russian research provider Investcafe.

Though Gazprom reduced gas prices for European consumers, it does not seem to have been enough to stimulate the dwindling demand.

He says the gas giant missed the boat on the shale gas revolution, although he concedes that shale gas production involves significant technological breakthroughs of the kind that is always difficult to predict.

“The U.S. itself has overlooked the sharp growth in shale gas production, ending up with gas oversupply on the domestic market at a time when LNG import terminals were being built in America,” Podlevskikh says.

He notes that Gazprom has enough gas production capacities at the moment, and its current problems mainly have to do with the shrinking European market – something the company is finding it difficult to make up for.

Last year, Gazprom came 31st on the list of the world’s leaders by market capitalization, dropping 16 positions from the 2011 ranking.

Analysts say it is hard to determine the extent to which the company’s own mistakes contributed to the overall negative market situation here.

It is possible that Gazprom’s shares have already reached the lowest point at which analysts normally recommend buying up to forestall a rebound.

Lakeychuk’s advice is to start buying Gazprom shares right now: “Gazprom’s target price stands at $7.3 per share, which is about double of the current market share price.”

The market has already been registering some developments that might prove beneficial for Gazprom. Natural gas spot prices have started to grow for the first time since 2008, rising higher than Gazprom’s own prices.

Similar trends are observed across Europe: the spot price at Belgium’s Zeebrugge gas hub has grown 23 percent to $12.9, while it stands at $12.7 at France’s PEG Nord.

The upward spot market trend is due to the reduction of LNG volumes in Europe, as that fuel is being channeled to the more attractive Asian markets; other contributing factors include production problems at Norway’s Ormen Lange natural gas field and the continuing cold spell across Europe.

According to Citi analysts, the gas spot market has exhausted supply opportunities from sources other than Gazprom. This makes the Russian company’s standing in Europe more solid than the market would assume.

If the global stock markets prove capable of further growth, Podlevskikh believes that Gazprom’s shares may regain popularity in the eyes of investors.

In his estimation, Gazprom’s 2012 dividends could amount to 5-6 percent. “That is an argument enough for investors to add Gazprom stock to their long-term portfolio,” says Podlevskikh.