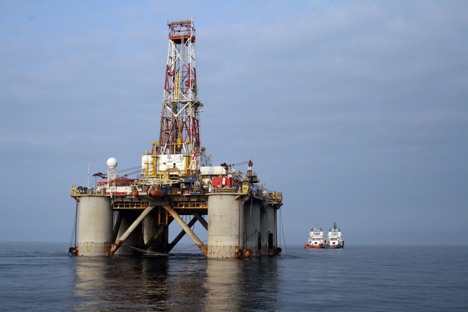 The "Sakhalin-3" project is one of the main sources of gas supply to Russia's Far East. Source: Gazprom

According to a presentation made by Vlada Rusakova, head of gas business at Rosneft, current projections would put Rosneft at 19 percent - 22 percent market share by 2020.

The company has already contracted half of its projected output increase; it has a portfolio of orders for 72 billion cubic metres of gas annually. While the presentation did not mention the starting dates of the contracts, it did say gas supplies to the domestic market would reach 63 billion cubic metres by 2016.

Current projects will produce just under half of Rosneft’s planned output, at 47 billion cubic metres, with the rest provided by new projects, such as the Kharampurskoye deposit, Rospan International, the Kynsko-Chesalskaya Group and Sakhalin-3.

This year the company will see almost 40 percent of its domestic gas supply contracts expire, and many customers are not planning to renew them. UBS Analyst, Maksim Moshkov, says Rosneft will be able to double its market share if Gazprom continues losing its own.

The analyst expects a 25 percent increase in domestic demand by 2020. Gazprom's share of the domestic market could drop to 60–70 percent by 2020. A Gazprom spokesman is not concerned. "Our share will decrease as the market keeps growing," he said.

“Market growth has already started slowing down: there’s a demand potential in power utilities, but even according to the best-case scenario, the Russian market will be consuming a maximum of 450–470 billion cubic metres of natural gas annually by 2020,” he said.

A source at Gazprom was confident that even with TNK-BP and Itera’s assets taken into account, Rosneft will only be able to produce 70–75 billion cubic metres of gas by 2020.

Novatek is another company vying for control of the market, and currently produces 18.5 billion more cubic metres of gas than Rosneft. By comparison, Novatek also expects a lower increase in production by 2020 – 90 billion cubic metres of gas.

Nesterov added that Rosneft is betting on the Kharampurskoye field, where gas deposits are considered hard to recover. If competition intensifies, he believes Novatek stands a better chance of expanding its market share.