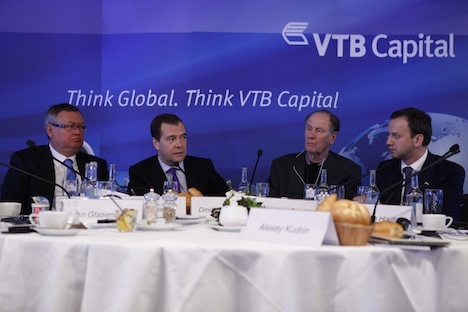 The supervisory board at VTB Bank has approved additional share issues worth 100 billion rubles ($3.2 billion). The shares may be offered in mid-May.

In late April the VTB supervisory board approved the terms for a planned share sale, a source close to VTB told Vedomosti.

The government has required the state bank to set the price so as to raise 100 billion rubles ($3.2 billion) from the deal, while keeping the state’s stake above 60 percent, the source added. The government currently owns 75.5 percent of the bank. Sources believe that the shares will go on sale by the middle of May.

On Wednesday, April 24, VTB Deputy Chief President Herbert Moos said that the bank needed to raise 100 billion rubles in order to keep growing assets at the current pace (in 2012, its assets went up by 9.2 percent by international standards).

The government, the bank and potential investors will be guided by current stock quotes. A discount within 5 percent is possible, which is common practice, says a source who took part in the discussions of the details of the transaction. However, the coordinators of the deal are trying to avoid selling at a discount.

The deal is structured in such a way that there will be no major-market offering of shares, the source told Vedomosti. He did not elaborate as to the structure of the placement or possible buyers.

VTB has not named the directors of the issue yet. News agencies have speculated that the offering may be run by VTB Capital, Citi, JPMorgan and Deutsche Bank.

VTB has been in talks with potential anchor investors for some time now. In February, Bloomberg reported that Qatar’s sovereign wealth fund was ready to invest about $3 billion in the bank to acquire shares and hybrid bonds used for capital building.

However, a source close to the group told Vedomosti that the deal was off. Moreover, VTB’s Moos said on April 29 that the bank’s management hoped some of the “existing investors” would be involved. Current shareholders include U.S.-based TPG, China Investment Corporation and Italy’s Generali. None were available for comment in early May.

VTB does not need to have an additional issue approved by the general meeting. The number of authorized shares stands at 14 trillion, and it has issued 10.46 trillion. To issue the shares – about a third of the authorized fund – VTB will only need the green light from its supervisory board.

The bank is supposed to offer the newly issued shares to its current shareholders first.

However, recent amendments to the law on joint-stock companies have reduced the period for companies to exercise their pre-emptive right to acquire additional shares in state-run issuers, says Ivan Makhalin, partner at Legal Capital Partners law firm.

The period is currently eight business days. If the shares were placed on Monday, April 29, the state bank will be able to begin selling shares to third parties starting May 16, he says.