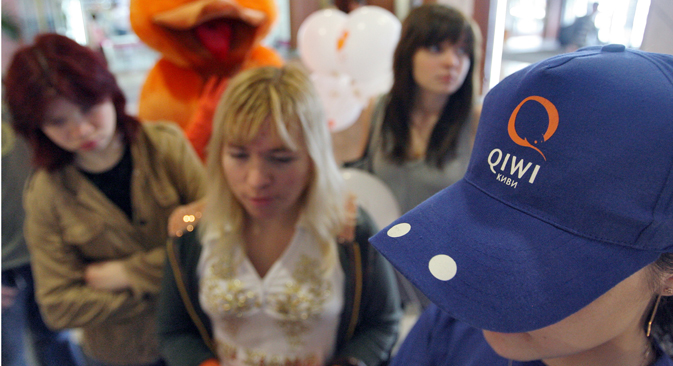 Qiwi operates a chain of 169,000 payment terminals and kiosks, which operate on a commission basis. Source: Kommersant

The company operating Russia’s largest instant payment system has conducted an IPO on the NASDAQ stock exchange. Valued at $884 million, 23 percent of Qiwi’s equity and 2.9 percent of its voting stock will be in free float.

Qiwi Plc, the operator of Russia’s largest instant payment system, conducted an IPO on NASDAQ May 3rd. The company placed 12.5 million shares in the form of American Depository Receipts at $17 per share.

The share price is a perfect medium from the previously set price range of $16–18, or $832–936 million for the entire company. Investors valued Qiwi at $884 million based on the IPO, with the offering oversubscribed by 5.5.

Only Qiwi shareholders sold the stock, while the company abstained from the placement. They raised a total of $244.375 million – $212.5 million for the sellers and $31.875 million in fees for the investment banks that underwrote the IPO.

The main sellers were Qiwi Board Chairman, Andrei Romanenko, and his father Nikolai Romanenko. Their Antana International Corp sold 3.23 million shares worth $54.4 million.

A source close to the placement participants told Vedomosti that 80 percent of the new investors were from the United States, followed by 17 percent from Europe and 3 percent from the rest of the world.

Qiwi has 52 million shares in total, including 40 million Class A shares (which give holders 10 votes) and 12 million Class В shares (one vote). Twenty-three percent of Qiwi’s equity and 2.9 percent of its voting stock will be in free float following the IPO.

Underwriters included Credit Suisse, JPMorgan, Renaissance Capital, Robert W Baird & Co., and William Blair & Co. Once the underwriters exercise an option for 1.8 million Qiwi shares (this can be done within 30 days of the placement), the free float will reach 26.5 percent of equity and 3.35 percent of votes.

“Qiwi made the top five of Russian companies to conduct IPOs on U.S. exchanges, which is quite a breakthrough,” Qiwi co-founder, Andrei Romanenko, told Vedomosti. He added that it was his father Nikolai Romanenko, rather than himself, who sold the shares during the IPO (through their jointly owned company Antana International Corp.).

“My father is planning to place the proceeds into a family trust (managed by Andrei Romanenko), to be spent on investments in web companies,” Romanenko said, adding that his partners in Qiwi, Igor Mikhailov and Sergei Fedyuschenko, were also planning to invest in web projects.

Major telecom operators Mobile TeleSystems and Vimpelcom were the first Russian companies to go public in the United States, conducting placements on the NYSE more than ten years ago.

They were followed two years later by STS Media, which offered 16.38 percent of its shares on NASDAQ at $14 per share, raising $3.459 billion.

The next Russian placement only came five years after that, as leading web company Yandex raised $1.435 billion in an IPO on NASDAQ – the largest IT offering to take place there in 2011.

“The expectations of all shareholders have been met,” Qiwi Board member Andrei Muravyev said of the IPO results. Muravyev is a financial investor: He bought into the company five years ago and has now exited it partly. He noted that he intended to invest the proceeds in Russia’s economy.

Qiwi is Russia's and the Commonwealth of Independent State's largest instant payment provider. Qiwi operates a chain of 169,000 payment terminals and kiosks, which operate on a commission basis. Over 40,000 vendors accept more than 39 billion rubles (roughly $1.3 billion) in cash payments monthly from 65 million customers who use the system’s services.