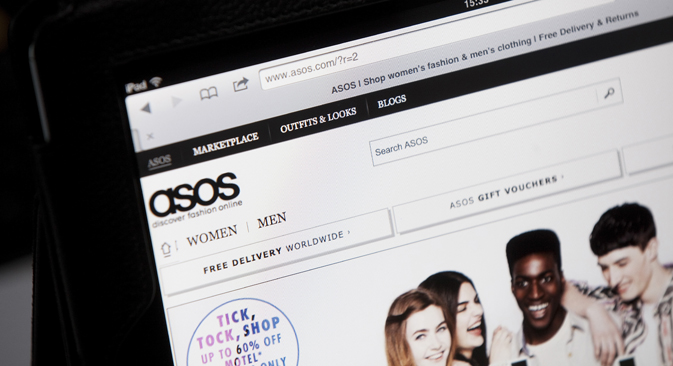 International online retailers are flocking to Russia. Following the footsteps of American eBay and Chinese Taobao, Asos launched a Russian-website. Amazon is expected to follow soon.

Asos launched a Russian-language website in May. A month earlier they introduced express delivery replacing the Russian Post, which is not exactly famous for its speed. An increased focus on the Russian market is not surprising.

The first half of the 2012–2013 financial year showed that Russia has become Asos’s fifth largest market by revenue (after Australia, France, Germany and the US).

“The average bill of Russian buyers is among the highest in Asos’s international markets,” says Vladimir Dolgopolov, manager of Asos Sales in Russia. Though Dolgopolov didn't specify an exact amount for Russia, Asos reported the average global bill came to $93. According to Dolgopolov, the launch of the new website has brought a substantial increase in orders.

In its report, Asos called Russia a priority market on par with China. Though Asos has partnered more with local companies in China, Russia calls for a different approach.

In Russia, the company employs a local express delivery service, but orders are processed and assembled at a central warehouse in the UK. Dolgopolov says the company is also "considering the possibility of working with local payment systems and an option of cash on delivery."

The Russian market has been increasingly popular among international online retailers,  said Olesya Bessonova, a representative of the Association of Online Retailers. E-commerce is growing by 25–35 percent a year in Russia.

According to Russian Post, the number of parcels and express packages from abroad reached 21.6 million in 2012, with online purchases accounting for around 70 percent of the total.

Prior to Asos, the American online auction service eBay and China’s Taobao were the first major international online retailers to have a Russian-language website. In the summer of 2012, eBay opened an office in Moscow headed by Vladimir Dolgov, the former general manager of Google’s Russian office.

It was reported recently that the world’s largest online retailer, Amazon, had decided to go Russian too. Arkady Vitruk, the former head of the Attikus Publishing group, has been appointed director of Amazon’s Russian office.

The article is based on materials from Vedomosti.