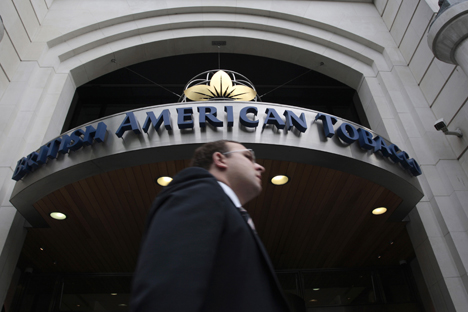 The share of British American Tobacco in the Russia's cigarette market in 2012 was 20.9 percent. Source: Reuters

International Tobacco Marketing Services (MUMT, a trader of British American Tobacco products in Russia) sought last April to reverse a decision made by an interregional inspection of major taxpayers.

The tax inspection had insisted that the trader pay an additional 187.9 million rubles ($6.26 million) in profit taxes, penalties and fines.

The inspection believes that the company had no grounds to include its expenses under contracts for "strategic and ancillary consulting services" with British BAT Investments Ltd when calculating income tax.

Infographics: Will Russia's new law reduce smoking or not?

The tax agency wondered why the cost of consulting services had risen 25 times in 2008 to 2.2 billion rubles (around $70 million).

During an audit in 2011, the company failed to produce documents confirming the amount of services procured in 2009, and the inspection ruled that the taxpayer acted with no business purpose and aimed at obtaining undue tax benefits.

The company objected, saying that in 2009 it expanded the list of offered services. Further, the cost of consulting services included several tobacco factories.

The first court backed the company, but the trader lost the case in the second and third courts (the appeals court issued its ruling in March 2013).

Alexander Luty, BAT Russia corporate relations director, says that MUMT will challenge the ruling by the third court in the Supreme Arbitration Court: “Just as any other international company, we make use of the services provided by our central office and pay for these services. This is common practice for most international companies operating in Russia and other countries of the world.”

This system of rendering and paying for services is standard practice for large international groups of companies, says Yulia Kuznetsova, senior lawyer at Sameta Tax and Legal Consulting.

The system is based on repayment of actual expenses by production companies depending on the ratio of sales by a specific company to the gross sales by the group, including total administrative costs.

Courts have no unified position on these issues. For instance, in the MUMT case, the court backed the tax inspection, while previously, in the case of Amkor Tobacco Packaging Novgorod, the court ruled in favor of the taxpayer, says Kuznetsova.