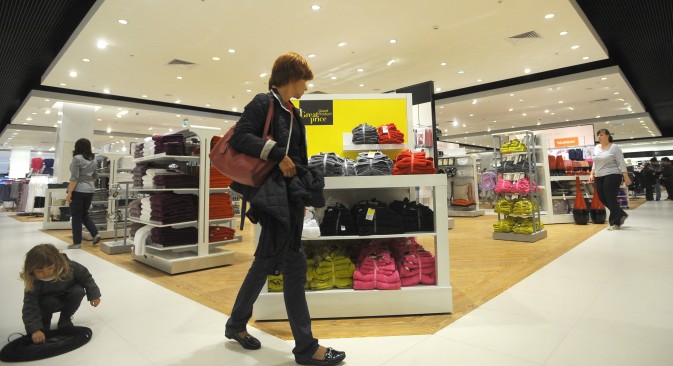 It remains to be seen if Russia will become Europe’s largest shopping center.Source: ITAR-TASS

In two years, Russia is projected to develop the largest retail space in Europe, surpassing its closest competitors, France and Great Britain.

Analysts at Cushman & Wakefield believe in two years Russia will become Europe’s largest shopping center. So far, France and Great Britain have been leading in terms of the number of shops and malls opened every year.

Russian commercial property developers have promised to open 2.87 million square meters of shopping centers this year, taking up almost a quarter of all European projects.

However, experts at Cushman & Wakefield expect no more than 1.6 million square meters, arguing that projected numbers are always higher than those commissioned by the end of the year.

Even in the worst-case scenario, Russia will still set a record in Europe for newly commissioned shopping malls, outstripping Great Britain in total retail space.

Developers in Great Britain plan to build a modest 325,000 square meters of retail space this year, while the figure for France stands at 1,390,000 square meters for 2013–2014, said Michael Rodda, head of Retail Property Investment in Europe and the Middle East at Cushman & Wakefield.

Russia’s retail space expansion has been driven by regional development. According to Tatyana Kluchinskaya, head of the Retail Department at Jones Lang LaSalle, not a single high-quality shopping center was commissioned in Moscow in the first quarter of 2013.

Moscow still awaits a maximum of 300,000 square meters to be commissioned by the end of the year. This said, some 70 percent of the new shopping centers are being built outside Moscow.

“A few years ago, retail chains were reluctant to expand. Now, many brands are expanding regionally, including into small towns, their top priority. Leroy Merlin, Jeans Symphony and Subway are just some of the names that have already confirmed they are planning to establish a presence in cities with populations of fewer than one million people,” Kluchinskaya added.

Meanwhile, Russia is still far behind China. Currently, China accounts for more than 50 percent of the 32 million square meters of retail space under construction globally.